Project 1174 has both bow ramp and well deck; it may operate as either a LST or as a LPD. A typical load is one battalion of 520 marines and 25 tanks. Up to 53 tanks or 80 armoured personnel carriers may be carried if the well deck is used for ground vehicle parking. 2,500 tons of cargo may be carried.

Mitrofan Moskalenko was decommissioned after the Russian Ministry of Defence determined modernization would be as costly as buying a new ship.[1][2] 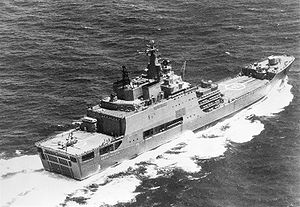