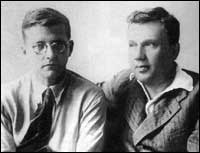 Ivan Ivanovich Sollertinsky (3 December 1902, Vitebsk - 11 February 1944, Novosibirsk) was a Russian polymath of the Soviet period. His father, Ivan Ivanovich Sollertinsky, came from a family of Russian Orthodox priests and served as a presiding judge, a privy counsilor and a senator.[1] His mother was Ekaterina Iosifovna Bobashinskaya whose family belonged to a noble szlachta branch of the House of Sas.[2]

Sollertinsky was an expert in theatre and Romance languages, but is best known for his musical career. He was a professor at the Leningrad Conservatory, as well as an artistic director of the Leningrad Philharmonic, a prominent music critic and a lecturer. In these capacities he was an active promoter of Mahler's music in the Soviet Union. Sollertinsky was also interested in ballet and wrote a lot about it during the 1930s. According to contemporaries - most famously Irakly Andronikov - he had phenomenal memory, spoke 26 languages and 100 dialects.[3]

Early in the life he met Mikhail Bakhtin and took part in his philosophical meetings. In 1927 he became close friends with Dmitri Shostakovich. In the wake of Shostakovich's first denunciation in 1936, Sollertinsky was called "the troubadour of formalism" by Pravda.[4] Shostakovich dedicated his Second Piano Trio op. 67 (started in 1943) to the memory of Sollertinsky who died just several months later in Novosibirsk during emergency evacuation.

On his trips to western Europe Sollertinsky obtained scores by western European composers, including Křenek and Weill. He reportedly was given a photostat of Gustav Mahler's Tenth Symphony by the composer's widow Alma, which Shostakovich considered completing. Thus it is not surprising that Shostakovich's first use of overtly klezmer music is in the tragic finale of the Trio Op. 67.