listen); formerly Stanyslaviv,[2] Stanislau, or Stanisławów; see below) is a historic city located in the western Ukraine.[3] It is the administrative centre of the Ivano-Frankivsk Oblast. Administratively, it is designated as a city of regional significance within the oblast, and together with a number of rural localities, is incorporated as Ivano-Frankivsk Municipality. Population: 226,018 (2013 est.)[4].

Built in the mid 17th century as a private fortress of the Polish Potocki family, with the partition of Poland in 1772 Stanisławów was passed to the Habsburg Empire, after which it became the property of the State authorities of the Austrian Empire. It was during that time that the fortress was transformed into one of the most prominent cities at the foothills of the Carpathian Mountains. After World War I, for a short stint it served as temporary capital of the West Ukrainian People's Republic, after the fall of which Stanisławów became part of the Second Polish Republic. At the dawn of World War II, the city was annexed by the Soviet Union, only to be occupied by Nazi Germany two years later. With the liberation of Ukraine in 1944, a Soviet regime was established in the city for the next 45 years. A few years before the fall of the Soviet Union, the blue-yellow flag was raised in the city as the symbol of an independent Ukraine.

A city visitor may find elements of various cultures intertwined within Ivano-Frankivsk, the Polish Rathaus, the Austrian city's business center, the Soviet panel multi-storied residential apartment buildings at the city's urban-rural fringe, and others. The city is third in population among other cities in the Carpathian Euroregion, yielding only to Lviv and Košice.

Stanisławów was founded as a fortress in 1663 and was named after the Polish hetman Stanisław "Rewera" Potocki, although other sources claim it was named after his grandson (see History of Ivano-Frankivsk). In 1772, its name was transliterated into German as Stanislau when it became part of the Austrian Empire and later Austria-Hungary; however, after the revolution of 1848, the city carried three different linguistic renderings of its name: German, Polish, and Ruthenian (German: Stanislau, pronounced [ˈʃtaːnɪslaʊ̯]; Polish: Stanisławów, pronounced [staɲiˈswavuf]); Ukrainian: Станісла́вів, Stanyslaviv, pronounced [stɑnʲiˈslɑβ̞iw]. Other spellings used in the local press-media included: Russian: Станиславов and Yiddish: סטאַניסלאוו‎. 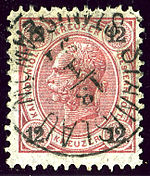 After World War II it was changed by the Soviet authorities into a simplified version Stanislav (Ukrainian: Станісла́в, pronounced [stɑnʲiˈslɑw]; Russian: Станисла́в, pronounced [stənʲɪˈslaf]). In 1962, on the city's 300th anniversary, it was renamed to honor the Ukrainian writer Ivan Franko. Due to the city's over-sized name, unofficially it is sometimes called simply Franyk[5] by its residents. Even though Ivano-Frankivsk is the officially accepted name, the city's original name was never fully abandoned and/or forgotten and can be found throughout the city in all kinds of variations.

Stanisław "Rewera" Potocki after whom the city was named firstly. 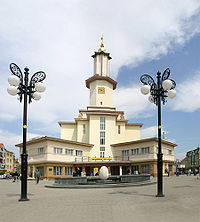 As is the case with most of Ukraine, the climate is moderate continental with warm summers, and fairly cold winters. The following climate data provided is for the past 62 years. The average number of days with precipitation is 170 spread almost equally throughout a year. Most precipitation takes place during the winter months and least - early fall. Thunderstorms occur mostly in summer months averaging around 25 annually.[6] Ivano-Frankivsk averages about 296 days of fog or misty days with about 24 per month.[6]

The city is situated in the Carpathian region northeast of the mountain range, sitting approximately 120 metres (390 ft) above mean sea level.[8] One of the several main geographical features is the Vovchynets Hill also known as the Vovchynets Mountains. The hill reaches 300-350 metres (1,150 ft) above the sea level and is part of the Pokuttya Highland (Upland). Around the hill Bystrytsia River branches into Bystrytsia of Nadvirna, Bystrytsia of Solotvyn, and Vorona. The last two rivers serve a natural border between the Pokuttya Highland and Stanislav Basin. The Vovchynets Hill is located just outside and northeast of Ivano-Frankivsk. Located southeast from the Stanislav Basin in the direction of the Prut Valley is the Khorosnen (Prut-Bystrytsia) Highland. The highest point of that highland is the mount Hostra 425 metres (1,394 ft).

The closest neighboring city is Tysmenytsia less than 10 kilometres (6.2 mi) to the east. Other cities that lie in the radius of 25 to 30 km (16 to 19 mi) are Tlumach (east), Nadvirna (south), Kalush (west), and Halych (north). The city also administers five adjacent villages that surround it: Mykytyntsi, Krykhivtsi, Vovchynets, Uhornyky, and Khryplyn.

Note: Historical population record is taken out of Ivano-Frankivsk portal (Ukrainian), more recent - the Regional Directorate of Statistics (Ukrainian). There is also other information on a population growth such as the Jewishgen.org. With asterisk there are identified years of approximate data. In the 18th century, differentiation among Poles and Ukrainians was by religious background rather than ethnic (Catholics vs. Orthodox). 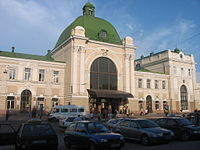 The city of Ivano-Frankivsk has an extensive network of public transport including buses, trolleybuses, and taxis. There are nine trolleybus routes and about 52 for regular buses. Some of the routes run beyond the city into nearby villages.

There is one railway terminal that serves the Ivano-Frankivsk train station. There are also smaller rail stations in adjacent villages, including Uhryniv and Khryplyn. All of them are part of Lviv Railways.

Until 2008, the railway terminal also housed a bus terminal which provided several inter-city bus routes, including some to international destinations. In 2000, construction began on a new bus terminal next to the railway terminus on Zaliznychna Street. Inauguration of the new bus terminal took place on 22 May 2010. At the opening ceremony the mayor of the city, Viktor Anushkevichus, noted that the new bus terminal was only partially completed, and for a period it would be necessary to offload passengers at the Pryvokzalna Square, which is already saturated with traffic. He also emphasised the need for another bus station on the outskirts of the city.[9]

The city is served by the Ivano-Frankivsk International Airport, which was granted international status in 1992. The airport shares its facilities with the 114 Brigade of the Ukrainian Air Force. Since 2002 the airport has been leased to the private enterprise company Yavson, and from 2005 the Public limited company Naftokhimik Prykarpattia, a (subsidiary of Ukrnafta). The contract with Naftokhimik Prykarpattia expires in 2013. 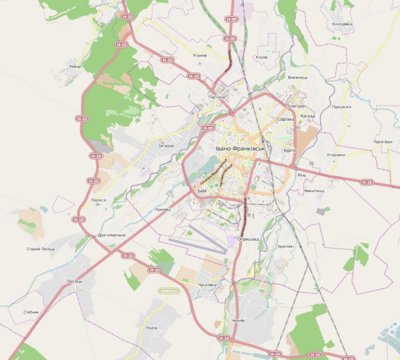 All street names reflecting the city's Soviet or Russian past have been returned to their former names, or given new names of national historic importance, or other non-controversial names. For example, Gagarin Street (connecting the city with its suburbs) became Vovchynets Street, Suvorov Street is now Harbar Street, and Soviet Street is Independence Street.

Around 100 other streets were renamed.

The city of Ivano-Frankivsk is located on the intersection of three major national (Ukraine) routes: H18, H09, and H10. There also is one important regional route T09-06. All the H-routes eventually connect to 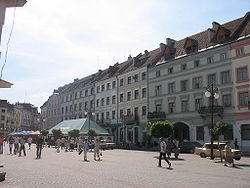 The Market Square in Ivano-Frankivsk 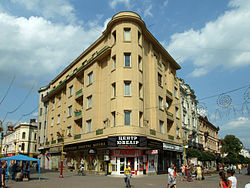 Viche Maidan, the corner of Vitovsky Street and Independence Street 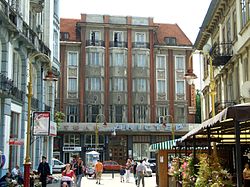 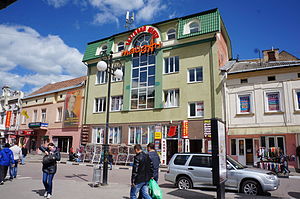 A shopping street in central Ivano-Frankivsk

The city has seven main city squares four of them located in the "old town" part of the city.

As a lot of regional centers in Ukraine and the former Soviet Union, Ivano-Frankivsk is also notorious for its rural-urban fringe panel building residential districts.

Both city and oblast administrations as well as the regional council are all located in a massive white building on the Hrushevsky Street locally known as Bily Dim or Bily Budynok. In front of the building is a big open space bordered by Shpytalna Street on the north-east, Hrushevsky Street on the south-east, and Melnychuk Street on the south-west. Next to the building is located a memorial to the Unification of the Western Ukraine with the rest of Ukraine. The main feature of the memorial is a tall marble stele, on the both sides of which are located statues: kamenyar (west) and kobzar (east).

The city has over 25 public schools of general education for grades 1 through 11. There are also some privately owned schools and lyceums. The city also has several professional public institutes. 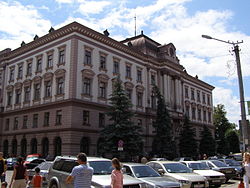 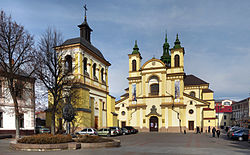 The building of Church of Virgin Mary which is used for the Regional Art Museum. 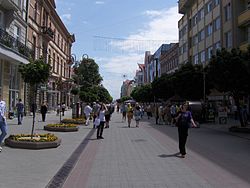 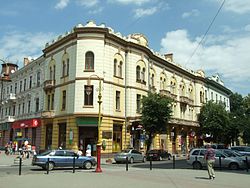 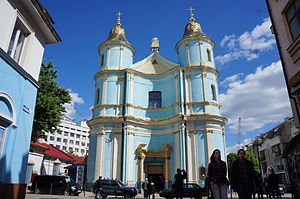 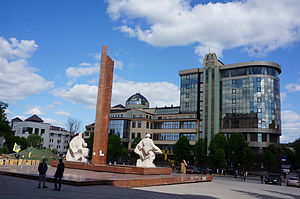 Shevchenko and Franko statues in Ivano-Frankivsk 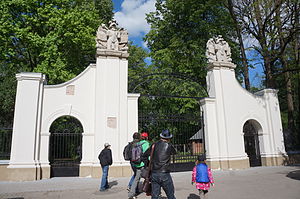 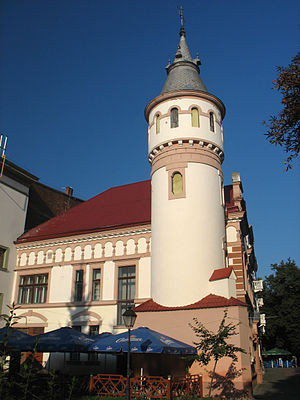 Ivano-Frankivsk is home to a number of sports teams. Most notably it was home to the football club FC Spartak Ivano-Frankivsk (Prykarpattya) that participated on the national level since the 1950s. Since 2007 the club only fields its youth team Spartak-93 and competes in the Children-Youth Football League of Ukraine. The former president of Spartak Anatoliy Revutskiy reorganized the local university (University of Nafty i Hazu) team in 2007 into the new "FSK Prykarpattia" with support of the city mayor Anushkevichus making it the main football club in the region and replacing Spartak. Previously during the interbellum period, the city was home to another football club based on the local Polish garrison and called Rewera Stanisławów (1908). That club competed at a regional level that had evolved at that period. With the start of the World War II that club was disbanded. During the Soviet period among several others there was another club "Elektron" that successfully participated at a regional level around the 1970s.

Ivano-Frankivsk is twinned with 22 cities and one county:[13]