The Ivy Club is the oldest eating club at Princeton University,[2] and it is "still considered the most prestigious."[3][4] It was founded in 1879 with Arthur Hawley Scribner as its first head.[5]

The Club, as described by F. Scott Fitzgerald in This Side of Paradise (1920), is "detached and breathlessly aristocratic," a description which continues to be accurate to this day.[6] A more recent account described Ivy as the "most patrician eating club at Princeton University" where members "eat at long tables covered with crisp white linens and set with 19th-century Sheffield silver candelabra, which are lighted even when daylight streams into the windows."[7] 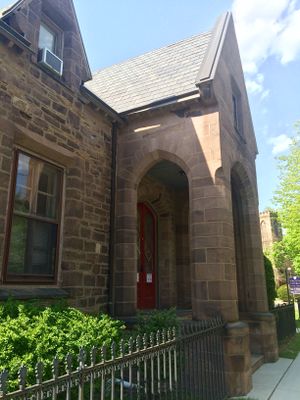 Ivy Hall, built to house Princeton's short-lived law school, later the first home of The Ivy Club, to which it gave its name

The Club was one of the last to admit women, resisting the change until Spring 1991 after a lawsuit had been brought against Ivy Club, Tiger Inn, and Cottage Club by student Sally Frank.[8] The members of each class are selected through the bicker process, a series of ten screening interviews, which are followed by discussions amongst the members as to whom of the remaining to admit. Current undergraduate members host regular "Roundtable Dinners" featuring talks by faculty and alumni.

The first clubhouse was Ivy Hall, a brownstone building on Mercer Street in Princeton that still stands. It had been constructed by Richard Stockton Field in 1847 as the home for the Princeton Law School, a short-lived venture that lasted from 1847 to 1852. From the time of its founding until its incorporation in 1883, the Club was generally known as the "Ivy Hall Eating Club."[9]

In 1883 the Club purchased an empty lot on Prospect Avenue, which was a country dirt road at the time. Ivy erected a shingle-style clubhouse in 1884 on what is today the site of Colonial Club. The clubhouse was remodeled and extended in 1887-88. Following Ivy's move to new quarters across Prospect Avenue some ten years later, its second clubhouse was used by Colonial before being sold and moved to Plainsboro Township, New Jersey.[10]

Ivy's third and current clubhouse was designed in 1897 by the Philadelphia firm of Cope & Stewardson. In 2009, the Club completed its most significant renovation to date. The expansion added a second wing to the facility, changing the Club's original L-shaped layout to a U.[11] Designed by Demetri Porphyrios, the new wing includes a two-story Great Hall and a crypt to provide additional study space.

The following is a list of some notable members of the Ivy Club:[12][13]