From Infogalactic: the planetary knowledge core
(Redirected from Izhmash)
Jump to: navigation, search
Not to be confused with Izhevsk Mechanical Plant.

Izhevsk Machinebuilding Plant (Russian: Ижевский машиностроительный Завод) or IZHMASH (ИЖМАШ) is a weapons and motor vehicle manufacturer based in Izhevsk, founded in 1807 at the decree of Tsar Alexander I, and is now one of the largest corporations in its field. It manufactures the famous Kalashnikov series of assault rifle, along with a host of other Russian arms, including medium cannons, missiles, and guided shells. Izhmash also produces other goods, such as motorcycles and cars. As of April 2012 the company was declared bankrupt.[3] In November 2012, A proposal was made to merge Izhmash with Izhevsk Mechanical Plant (Izhmekh) under the new name "Kalashnikov". As of 13 August 2013, Izhmash and Izhevsk Mechanical Plant have been merged and formally renamed Kalashnikov Concern.[1] 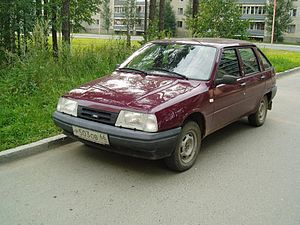 The first IZh motorcycle was 1928's IZh 1, a 1200cc across-the-frame V-twin with shaft drive, designed by the Soviet engineer Pyotr Vladimirovich Mokharov (1888–1934). They "owed a little" to contemporary DKWs.[4] In the 1970s and 1980s, these motorcycles were sold in Britain under the Cossack and Neval brands.[5] The company is the largest Soviet motorcycle maker.[5]

Styling began to diverge from the AZLK originals beginning in 1970, when IZh kept two round headlamps instead of adopting Moskvitch's rectangular ones, and got a different grille.[6] In 1971, the IZh-built 412 was redesignated 412IE.[6] The IZh-built 412s had a reputation for being better quality than the Moskvitch originals.[7]

Between 1973 and 1979 IZh was one of the makes marketed by SATRA in the United Kingdom under the Cossack Motorcycles brand; the Planeta and Jupiter models.[11]

Their products are currently in use in a wide variety of countries, ranging from well established countries such as the United Kingdom, Germany and France to the developing countries of Asia, Africa and Latin America. The factory produces the famous Kalashnikov series of rifles for the Russian military and for export. Mikhail Kalashnikov, the rifle's designer, worked at the factory. Variants produced at Izhmash include the AK-100 series of rifles, the Saiga sporting line of rifles and shotguns.[12]

In particular, the Saiga line of rifles has been a success for the concern, being popular with sportsmen in countries such as the United States. In 2012 about 70 percent of the factory’s output was civilian rifles, up from 50 percent in 2010. Of the civilian arms, about 40 percent are exported to the United States. On 16 July 2014, President Obama signed an Executive Order banning the importation of Russian-made firearms into the United States.[13] "The sanctions were taken because of Russia's aggression toward the Ukraine. Russian banks and energy companies were also targeted."[13]

In November 2012 Dmitry Rogozin proposed to merge Izhmash with Izhevsk Mechanical Plant (Izhmekh) under the new name "Kalashnikov". In a meeting with the Russian president, Mr. Rogozin has said "Izhmash and Izhmekh, with due respect, are not brands. "Kalashnikov" is a brand." Vladimir Putin supported the idea.[15] The merger was concluded on 13 August 2013.[1]

As part of strategy plan of widening the product line of the group, the company purchased a 51 percent stake in Euroyachting Rybinskaya Shipyard Group that produces high-tech landing craft, search and rescue and pleasure launches. Also, it acquired a controlling stake of 51 percent of ZALA Aero, a developer of unmanned aerial systems.[16]