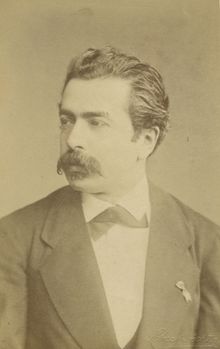 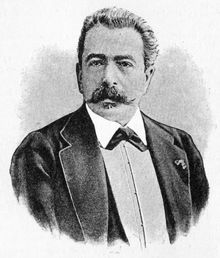 Józef Wieniawski (23 May 1837 – 11 November 1912) was a Polish pianist, composer, conductor and teacher. He was born in Lublin, the younger brother of the famous violinist Henryk Wieniawski. After Franz Liszt, he was the first pianist to publicly perform all the études by Chopin. He appeared with Liszt in recitals in Paris, London, Copenhagen, Stockholm, Brussels, Leipzig and Amsterdam.[1]

Although now neglected, Józef Wieniawski enjoyed a reputation as one of Europe's finest musicians.[1] At the very end of his life a young journalist asked him how long he intended to serve music. He replied: "As long as I remain young!"[2]

Józef Wieniawski studied at the Conservatoire de Paris with Pierre Zimmermann and Antoine François Marmontel in 1847,[3] leaving in 1850. In 1855 he received a scholarship from the Tsar of Russia to study with Franz Liszt in Weimar and from 1856 until 1858 in Berlin with Adolf Bernhard Marx, with whom he studied music theory.[3]

After he had performed between 1851 and 1853 as a companion to his brother, he decided to follow a separate career as a piano virtuoso. On concert tours through Europe, he performed not only his own compositions, including the Piano Concerto in G minor, but also the works of composer Beethoven, Schubert, Mendelssohn, Liszt, Schumann and Weber. According to Liszt, he was the first pianist after him to perform Chopin's études, all in public.

After returning to Paris he established friendly relations with Rossini, Gounod, Berlioz and Wagner, also approaching the Imperial Court and becoming a favorite artist of Napoleon III.[2] He then moved to Moscow where he was named to the piano faculty at the Moscow Conservatory, founded in 1866. In 1878 he became professor of piano at the Brussels Conservatory,[3] living again in this city from 1902.[2] He died in Brussels, aged 75.

In addition to a symphony and a piano concerto, Wieniawski composed among others a piano sonata, 24 études, two concert études, a ballad in E minor, polonaise, mazurka, barcarolles, impromptus, waltzes, and many short piano pieces. His compositions, written to be played at his own concerts, bear superior artistic qualities and technical difficulties of the highest level, giving so a clear idea of their author's performing abilities.[4] He left 11 mechanical recordings of his piano pieces which to date have not come to light.[2]