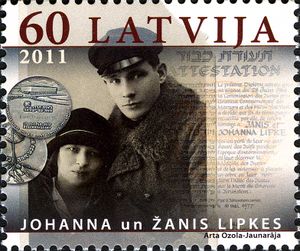 Lipke, a dock worker in the port of Riga, was determined to help save Latvian Jews from capture by the Nazis after witnessing actions against them in the streets. He retrained in order to become a contractor for the Luftwaffe, and then used his position to smuggle Jewish workers out of the Riga ghetto and camps in and around Riga, whom he concealed with the aid of his wife until the arrival of the Red Army in October 1944. The Lipkes and their various helpers saved forty people in this way, one fifth of the approximately 200 Jews who survived the war in Latvia.

When he died in 1987, the Jews of Riga arranged his funeral, and he is honoured as one of the Righteous among the Nations.

On 4 July 2007, the day of remembrance of the victims of genocide against the Jewish nation, a monument commemorating those, and in particular Jānis Lipke, who saved Latvian Jews was unveiled at Riga's Great Choral Synagogue.[1]