From Infogalactic: the planetary knowledge core
(Redirected from JG 51)
Jump to: navigation, search

Formed in August 1939, and commanded by 48-year-old World War I ace Onkel Theo Osterkamp, JG 51 was based in the early months of the war in the West, fighting in the French campaign and in the Battle of Britain. From late June to mid July JG 51 was the only fighter Geschwader engaged continuously against the RAF. During the battle JG 51 lost 68 pilots, the highest casualty rate of the Luftwaffe fighter units engaged. JG 51 was one of the two Geschwader that had four Gruppen early in the war, the other being JG 1. 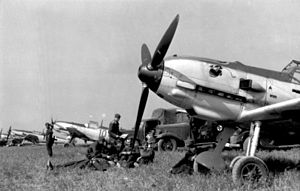 On 12 July 1940, JG 51 moved to Saint-Inglevert, Stab JG 51 was at Saint-Inglevert until November.[1] Whilst based at the Mardyck airfield (near Dunkirk) in late 1940, the German ace Josef "Pips" Priller was a Staffelkapitän with JG 51, flying Bf 109-E "Yellow One". Priller went on to score over 100 victories, the third highest among Luftwaffe day fighters on the Western Front, fighting solely against the Western Allies.

JG 51 claimed 345 aircraft destroyed by May 1941 and was therefore one of the elite units, with 'top ten' aces at this time including Werner Mölders with 68 claims, Walter Oesau with 34 claims, and Hermann-Friedrich Joppien with 31. Major Werner Mölders became the unit's commander (Geschwaderkommodore) in July 1940 and led the unit at the invasion of the Soviet Union in June 1941.

For the new offensive in the East JG 51 was positioned in the centre of the 4480 km-long front that stretched from the Barents Sea to the Black Sea. Its principal task was to clear the skies above Panzergruppe 2, which formed the right flank of Army Group Centre, advancing north east towards Moscow.

Claiming 69 kills on the first day of the offensive, by 30 June 1941 JG 51 became the first fighter Geschwader to claim 1,000 air victories (113 kills in 157 sorties were claimed on one day). 2./JG 51, whose Bf 109Fs had been fitted with ventral bomb racks, were alone credited with 43 ground victories in four Jabo sorties during the day. On 24 June JG 51 claimed 57 bombers shot down of a total of 81 victories on that day. On 25 June JG 51 shot down 83 Tupolev SB-2s. Mölders became the first fighter pilot to reach 100 claims in July and in the same month JG 51's Oberfeldwebel Heinz Bär reached 60 claims and was decorated with the Oak Leaves. A total of 500 Soviet claims was reached by 12 July 1941, although 6 pilots had been lost by JG 51 in the intervening 3 weeks since the offensive had started. By 10 July, the Geschwader was gathered on the pre-war complex of Soviet airfields around Bobruisk.

After Mölders' departure in September 1941 (and death later that year) the Geschwader adopted his name as a title of honor in early 1942. Jagdgeschwader 51 Mölders was to remain on the centre sector of the Russian front throughout the rest of 1941. However, Oberstleutnant Friedrich Beckh (one of the few fighter pilots to wear spectacles) proved an uncharismatic commander after Mölders, and it was not until Major Karl-Gottfried Nordmann took over in April 1942 that a worthy successor to Mölders was found. In the period 22 June - 5 December 1941 the unit destroyed 1,881 Soviet aircraft against 84 losses in aerial combat and a single aircraft on the ground.[2] 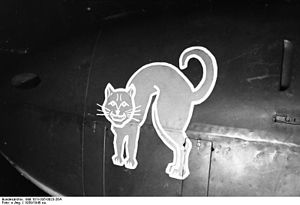 Air support for the Wehrmacht's Army Group Centre was entrusted to General Wolfram Freiherr von Richthofen's VIII. Fliegerkorps. In early January 1942, among the fighter units available to von Richthofen were II, III and IV/ JG 51. With the onset of the sub-zero conditions of the Russian winter, the majority of JG 51's available aircraft were grounded.

The Russian winter counter-offensive forced III. / JG 51 into flying numerous fighter-bomber operations in direct support of the infantry, and the Gruppe had few aerial "kills" claimed through January 1942. II. / JG 51, however, accounted for most of VIII. / Fliegerkorps's aerial victories during the Soviet offensive. Particularly successful was the duo of Ltn Hans Strelow and Ofw Wilhelm Mink, both of 5. / JG 51. They claimed five MiG-3s of 16 IAP on 4 January (Mink claimed three), and 9 days later Mink claimed a Pe-2 while ltn Strelow destroyed two R-Z biplanes for his 30th and 31st victories. On 4 February, Strelow increased his victories to 36 by shooting down four Russian aircraft. The 19-year-old Strelow claimed his 40th victory on 28 February and claimed 4 victories on both 6 March and 17 March. The next day he was awarded the Ritterkreuz des Eisernen Kreuzes and also shot down seven Soviet aircraft. He was awarded the Eichenlaub on 24 March with his claim total at 66.

In early 1942, Heinz Bär took command of IV. / JG 51, and in mid-February he was awarded the Swords, after achieving 90 claims before departing for JG 77.

Most of early 1942 was spent in operations supporting the Central Front drive towards Moscow, or defensive missions against counter-attacks on Heeresgruppe Mitte's left flank. The 2. Staffel were now released from the unpopular fighter-bomber operations conducted since the start of the offensive the previous year. 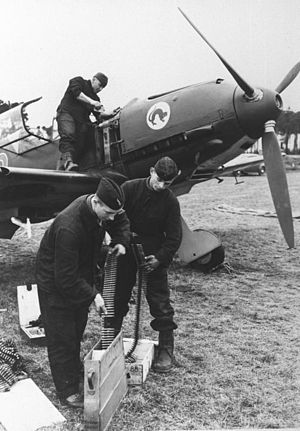 Army Group Centre's situation had by now stabilised after severe losses in personnel and material. It had been saved from almost complete destruction mainly by the efforts of the VIII. Fliegerkorps - including Stab, II, III and IV./JG 51. On 8 April 1942, JG 51 became the first Jagdgeschwader to reach 3,000 victories.

After the Winter offensive, there followed a lull in operational intensity with April–June 1942 seeing little fighting in the air. However, JG 51 lost three of its experten in less than ten days; Ltn Hans Strelow (68 victories) was lost on 22 May; 2. / JG 51's Oblt Erwin Fleig (66 victories), ex-wingman to Werner Mölders, bailed out and captured on 29 May; and two days later Hptm Josef Fozo (27 victories), Kommandeur I. / JG 51, was severely injured in a landing accident and would never return to front-line service.

Night bomber attacks during June 1942 managed to put a part of JG 51's aircraft out of commission on the airfields at Orel, Bryansk and Dugino (west of Kursk). However, Soviets bomber and ground-attack operations in daylight against the same targets on 5 July proved far more costly. II. / JG 51 claimed some 46 Soviet aircraft shot down in return for two Bf 109 F-2s with severe battle damage.

On 2 August, JG 51 claimed 45 victories, though during the first three days of August, 20 JG 51 aircraft were shot down. On 2 August, Gruppenkommandeur of III. / JG 51, Hptm. Richard Leppla was shot down and was seriously injured. The next day, 11. / JG 51's Staffelkapitän Oblt Georg Seelmann(39 victories) bailed out injured, as were Oblt Harald Jung of 4. / JG 51, and Ltn Gottfried Schlitzer of 9. / JG 51. To bolster JG 51, Major Joachim Müncheberg arrived from JG 26 to be groomed for the role of Geschwaderkommodore. Two of the 16 victories claimed by JG 51 on 3 August 1942 were Major Muncheberg's 84th and 85th kills.

In August 1942, JG 51 suffered heavier losses than anything previously during the conflict; 101 Bf 109s were destroyed or written off from all causes during the month, with 17 pilots killed, missing, or hospitalized.

In November 1942, II. / JG 51 was transferred to the Mediterranean theatre under Hauptmann Hartmann Grasser, fighting over Tunisia, Sicily and Italy before leaving for Sardinia in April 1943. 3. / JG 1 were also transferred in, and subordinated to II. Gruppe as 6. Staffel [3] While in Tunisia, Grasser claimed 12 victories to raise his total to 103, while Anton Hafner claimed a further 20. The Gruppe claimed 7 Spitfires on 27 November, and claimed some two dozen fighters in the first two weeks of December. Although II. / JG 51 would claim some 121 air victories, the far superior numbers of Desert Air Force and USAAF fighters meant their effect on the air and ground battles were gradually minimised and their losses increased.

By April the hard-pressed Gruppe were stationed near Tunis as the superior numbers of the Allied armies further reduced the Axis perimeter. The unit handed over its remaining aircraft to JG 77 and left the continent on 19 April 1943. The unit had lost 26 pilots killed, almost a 100% loss rate since their arrival.[4]

In July, the unit flew intensively from Trapani against the invasion forces in Sicily, claiming 26 kills. In March 1944, the Gruppe moved eastwards into Yugoslavia and the Balkans in order to cover the vital Ploiești oil fields.

Later in 1943 II Gruppe joined in the defence of the Reich against the USAAF 15th Air Force's bomber offensive, being stationed at various times in Hungary, Greece and Austria until late 1944. 6 B-17's were downed on 23 June 1944, and 5 B-24s were claimed the day after. 7 bombers were claimed without loss on 15 July. At this time 5. / JG 51 was detached to Crete to cover the Axis maritime supply routes.

During the offensive around the Kursk salient, I., III. and IV. / JG 51 were based at Orel with Luftflotte 6, flying alongside I. / JG 54 in support of Army Group Centre. These Gruppen were tasked with escorting Ju 88s, He 111s and Ju 87s -- as well as defensive intercepts and offensive sweeps over the battle area. On 5 July 1943, the Soviets launched concentrated air attacks against the German airfields, and as all available Luftflotte 4 and 6 fighters scrambled, one of the largest air battles in history began. JG 51 scored heavily, Oberfeldwebel Strassl claiming 30 shot down in the next 3 days to raise his score to 67. On 8 July 1943, Hubert Strassl was bounced by four LaGG-3s 60 km north of Kursk. Strassl had already downed three enemy aircraft on this day, but when forced to bail out of his Fw 190 A-4 "Black 4", he failed to open his parachute in time. He was posthumously awarded the Ritterkreuz in November 1943.

In late July 1943, JG 51 claimed its 6,000 victory. The Geschwader then converted back to the Bf 109G due to increased demand for the Focke-Wulf Fw 190 on other fronts. In May 1944, JG 51 claimed its 8,000 aircraft destroyed. JG 51 was heavily involved defending the retreat following the Soviet Offensive of June 1944, operating with III. / JG 52 as the heavily outnumbered fighter cover.

Oblt "Toni" Hafner shot down a Russian Yak-7 fighter for his 204th claim on 17 October 1944, but after the low-level encounter, his Bf 109G hit a tree and crashed, killing JG 51's highest scoring ace.

7. / JG 51 (equipped with Bf 109 G-6's) was attached to II. / JG 1 in May 1944 from Brest-Litovsk, with pilots arriving at Störmede late in May and hurriedly converting to the Fw 190. (It was renamed 8. / JG 1 on 15 August 1944 when the four-Staffeln Gruppe became the Luftwaffe standard.) 7. Staffel was led by Ritterkreuzträger (Knight's Cross winner) Hptm Karl-Heinz Weber with 136 confirmed kills. Its two other experten were Ltn Friedrich Krakowitzer (23 kills) and Ofhr Günther Heckmann with 12 kills.

7. / JG 51 joined II. Gruppe with 15 pilots on strength by the end of May 1944, but during the first two months of the Normandy campaign, the Staffel was decimated with twelve pilots killed, one taken POW and one severely wounded.

As the war turned against Germany, JG 51 was forced to operate deeper and deeper in the German heartland, finally staging out of East Prussia by the end of the war in May 1945.

Given below is a list of commanding officers of JG 51.[5]