From Infogalactic: the planetary knowledge core
(Redirected from JG 54)
Jump to: navigation, search

Jagdgeschwader 54 (JG 54) Grünherz (Green Heart) was a Luftwaffe fighter wing during the Second World War. It was known as the Green Hearts Wing, and it was the second highest scoring wing of all time, JG 52 being the highest. JG 54 flew on the Eastern Front, racking up over 9,600 kills, with aces such as Walter Nowotny, Otto Kittel, Freiherr Peter Grunhertz, Hans "Phips" Philipp, Gunther Lutzow, Emil "Bully" Lang (Lang holds the record for most kills in a day,18), Max-Hellmuth Ostermann, Dietrich Hrabak, Werner Schroer and Hannes Trautloft being the most famous Experten.

Having enjoyed initial success over the Channel and South-east England during the summer of 1940, the unit was transferred to the Eastern Front in the spring of 1941 for Operation Barbarossa - the German invasion of the Soviet Union. JG 54 would remain a Jagdwaffe stalwart in the east, flying firstly Bf 109Fs and then the Fw 190.

JG 54 was known for its non-standard camouflage schemes, similar to what most Luftwaffe medium bomber (Kampfgeschwader) wings already used from early in World War II. For example, Bf-109F-4's on the Leningrad front 1941–42 were painted in black-green/dark-green splinter finish with yellow under cowling and under the wing tips.

I./JG 54[Notes 1] was initially formed as I./JG 70 near Nürnberg in July 1939. As was to become tradition within the "Grünherzgeschwader", the Gruppe took the Nürnberg coat-of-arms (per fess dexter, Or, an eagle displayed Sable, sinister bendy of six Gules and Argent), to represent the region the unit came from. On 15 September 1939, I./JG 70 was redesignated I./JG 54.

III./JG 54 has its roots in Prussia. Initially raised as I./JG 21, the members were drawn from the Jesau region in former East Prussia. On 15 July 1939, I./JG 21 was redesignated III./JG 54. However, the bureaucratic nature of the young Luftwaffe was such that it was over a year before records would reflect the new designation. Thus III./JG 54 fought in Poland and France as I./JG 21.

JG 54 first saw combat in the fall of 1939 in the offensive against Poland. II/JG 54 and III/JG 54 saw combat, while I/JG 54 remained stationed in Herzogenaurach. Equipped with BF 109Ds their operations consisted of ground attack, air superiority and escorting Stukas. Several pilots of JG 54 were awarded decorations during this campaign.

Campaign in the West

After the success in Poland JG 54 was transferred back, on 9 October 1939, to Germany, occupying airfields in the west and south. Before the invasion of France, during a period known as Sitzkrieg, they operated mainly in an air defence role. Flying routine sweeps up to the French border, contact was limited to small skirmishes with French or British reconnaissance planes. The Geschwader began to field BF 109Es at this time as well.

The Battle of France broke out on 10 May 1940. The Luftwaffe operated by advancing in front of the German army to destroy French airfields and industrial complexes. JG 54's role was to escort the bombers (Stukas and Heinkel He 111s mostly)) and to conduct fighter sweeps in French airspace in order to maintain air superiority. These roles were maintained throughout the operations at Dunkirk against the evacuating British Expeditionary Force. During the period 10 May to 21 June (until their transfer to the Netherlands and the capitulation of France) JG 54 claimed 17 aircraft, according to JG 54 documentation.

Before the Battle of Britain the Geschwader were again transferred, this time to the Netherlands. The principal reasons for the transfer were the reequipping of the unit and giving the pilots a chance to rest before air defence operations continued against British bombers. In a particularly devastating raid on the Soesterberg airfield, III/JG 54 suffered heavy ground crew and equipment losses. While in the Netherlands they claimed another 21 aircraft (20 Blenheim Bombers and 1 Supermarine Spitfire)

The Battle of Britain

The Battle of Britain began in late July and early August, with the goal of destroying the RAF, a prerequisite of a land invasion of Britain. The three JG 54 Gruppen were transferred to airfields near Calais on 6 August 1940. Over the next months JG 54 would experience the most hostile fighting environment they had yet encountered. Dissatisfied with the fighter arm's performance, Göring's subsequent purge of the older peace-time Jagdgeschwader commanders in mid 1940 resulted in Major Hannes Trautloft being placed in command of JG 54, replacing Major Martin Mettig. Serving in that capacity until July 1943, Trautloft was a natural leader and left an indelible mark on JG 54 and was regarded as a leader who cared for his men. Trautloft also devised the 'Green Heart' emblem of JG 54, adopting the regional emblem of his birthplace in Thüringen ('The green heart of Germany')

The Battle of Britain would prove to be costly for both the Luftwaffe and JG 54. The Geschwader lost 43 pilots, 40 percent of the pilots they began the battle with. The 3 staffel itself went from 12 pilots to 2 by the end of the Battle. JG 54 however claimed some 238 enemy aircraft destroyed. The first Knight's Cross or Ritterkreuz des Eisernen Kreuzes, given upon achieving 20 victories, was awarded to Hauptmann Dietrich Hrabak, Kommandeur II/JG 54, during the Battle on 21 October.

Aftermath of Britain and The Balkans 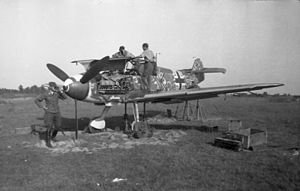 After the Luftwaffe's defeat, the three gruppen were all assigned to separate locations once again. I/JG 54 was assigned as a subordinate of JG 1 from [27 September], 1940 until May 1941; II/JG 54 was given winter's rest from 3 December 1940, until 23 January 1941 at Delmenhorst airfield; III/JG 54 was put on a similar rest after a short lived air defense role in the Netherlands. II/JG54 and III/JG 54 served briefly in France at Le Mans and Cherbourg. They provided air protection over Normandy, but due to quiet conditions much of the unit's time was devoted to training. On 29 March 1941 Stab, II, and III/JG 54 were relocated to the Balkans. Conducting mostly ground attack operations on locomotives and rolling stock, they also encountered Yugoslavian BF 109Ds that had been purchased from Germany prior to hostilities. After the defeat of Yugoslavia, JG 54 traded in their Emil(109-E) model 109s for the more modern Franz(109-F) models. Reunited with I/JG 54 the unit was transferred into Prussia to begin training and preparations for Operation Barbarossa. 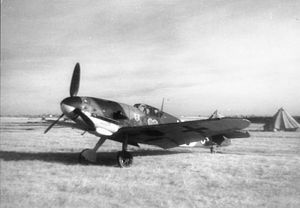 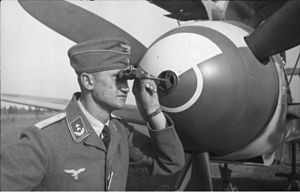 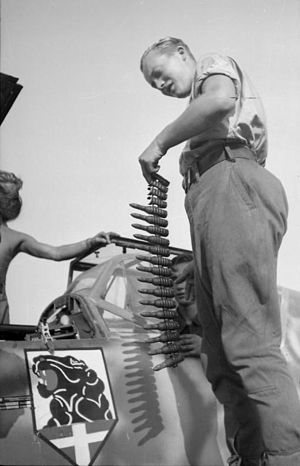 Claiming 45 kills on the first day, JG 54 served on the Northern Front during the invasion of Soviet Russia on 22 June 1941 as part of the Luftwaffe's Luftflotte 1, and would remain on that part of the Eastern Front for most of its existence. The Finnish, Baltic & Leningrad Fronts were far more static in nature than other Eastern Front theatres, leading to a more stable existence for JG 54 operations, although the severe cold during the winters of 1941-44 would constantly hamper fighter operations. JG 54's operations for 1941-43 had essentially a twofold objective; to keep pressure upon the beleaguered Leningrad sector, and to reduce Soviet pressure on the Lake Ilmen area at the German flank.

By 18 July the Geschwader had chalked up its 500th Soviet air claim, and on 1 August became the third Geschwader to claim 1,000 air kills. In the period 22 June - 5 December 1941 the unit destroyed 1,078 Soviet aircraft in return for 46 losses in aerial combat and a single fighter on the ground.[1]

Trautloft instituted the successful tactic of intercepting Soviet nuisance raiders on moonlit nights, and JG 54 claimed 56 kills in January–July 1942 while suffering no losses on these interceptions. In February 1942 alone JG 54 claimed 201 kills for 18 pilots killed. The 2,000 kill came on 4 April 1942 by Oberfeldwebel Rudolf Klemm.

Trautloft left JG 54 in July 1943 when General der Jagdflieger Adolf Galland asked him to join his staff as Inspizient Ost. (He ended the war with 57 victories and the Knight's Cross of the Iron Cross.) After his departure JG 54 continued operating on the Northern Front, and their victory tally rose continuously. Feldwebel Helmut Missner was credited with JG 54's aerial victory on 17 July 1943.[2] The 7,000 JG 54 claim was made on 23 March 1944, with the 8,000 mark passed on 15 August.

I.,II. and IV./ JG 54 ended the war fighting around the Baltic region, supporting the troops of Army Group North through Latvia and Estonia, and into the Courland Pocket of East Prussia. JG 54 could never hope to regain air superiority against the mounting number of Russian aircraft. The Russians never defeated Army Group North, which held out until the last day of the war, surrendering 210,000 Germans to the Soviets in Courland.

The remaining serviceable FW-190's were ordered fly to Flensburg on the Danish border, with the German Navy evacuating as many of the ground personnel as possible by ship. The JG 54 pilots, led by Oberst Dietrich Hrabak, ripped out all unnecessary equipment from the fighters, allowing room to take two men, one man crouching behind the seat and the other fitting into the fuselage. In this way at least 90 JG 54 personnel escaped Russian capture.

Partial regrouping to the Western Front

In February 1943 III./JG 54 was transferred back to the west for operations against the RAF and USAAF. At first they were to operate as stand alone BF 109 unit, but later were attached to JG 26. Intensive training in the more rigorous techniques of fighting on the Western Front were only partly successful, and Oberst Josef Priller, Geschwaderkommodore of JG 26 and charged with III gruppe's training, refused to declare the gruppe operational. III Gruppe transferred to North Germany as a result, supporting Jagdgeschwader 1. The gruppe would take several losses before acclimatising to the new theatre; two experienced III gruppe experten - Hpt Günter Fink and Lt. Friedrich Rupp - would be killed in action on 15 May alone. III./JG 54 would remain in the west for the rest of the war.

During the autumn of 1944, III./JG 54 was the first Luftwaffe unit to be supplied with the new Fw 190 D-9 "Dora". The D-9s were used in base defence missions for the Me 262 jets of Kommando Nowotny, and later over North-West Europe. 68 operational aircraft were available early in December, but such were the heavy losses sustained that the gruppe was disbanded soon after. Hpt. 'Bazi' Weiß,(121 kills), the Gruppenkommandeur, and 12 other pilots were killed by RAF fighters on 29 December 1944 alone.

At the end of 1944 Zerstörer Geschwader ZG 76 was disbanded and its pilots formed the nucleus of a new III./JG 54. Operating from Muncheberg, near Berlin, the unit's Fw 190s saw intensive action against Russian ground targets such as road and rail supply columns, flak positions, armour and the bridges across the River Oder. A few weeks before the war ended, the depleted III./JG 54 was disbanded, being absorbed into JG 26.

Although Luftwaffe documentation were destroyed at the end of the war surviving records indicate JG 54 lost 491 pilots killed in action and 242 pilots missing. A further 322 pilots were wounded in action. The ground personnel lost 570 killed.[3] Total losses in aircraft were approximately 1071 Bf 109 and 746 FW 190.

Surviving aircraft that served with JG 54

A confirmed half-dozen aircraft, five Messerschmitt Bf 109s and one Focke-Wulf Fw 190A, that once served with JG 54 still exist in the 21st century, with one of these, the Fw 190 A-5 restored by the Flying Heritage Collection in Washington State USA (see below), currently being airworthy.