From Infogalactic: the planetary knowledge core
(Redirected from JG 77)
Jump to: navigation, search

Jagdgeschwader 77 (JG 77) Herz As ("Ace of Hearts") was a Luftwaffe fighter Geschwader (US "wing"/UK "group") during World War II. It served in all the German theaters of war, from Western Europe to the Eastern Front, and from the high north in Norway to the Mediterranean.

All three gruppen (US "groups"/UK "wings") within the Geschwader operated variants of the Messerschmitt Bf 109. However, II. Gruppe is notable as the only German unit entirely equipped, albeit only during November–December 1943, with the Macchi C.205, a highly regarded Italian fighter.

Invasion of Poland, campaign in the West and the Balkans

In April 1940 JG 77 took part in Operation Weserübung, the invasion of Norway. A third Gruppe was created in Norway in July, while the original two Gruppen took part in the Battle of France from 10 May 1940. After the successful invasion of France, I. Gruppe initially supported X. Fliegerkorps (under Luftflotte 5) in operations against Britain from bases in Norway. While the I./JG 77 was based in France during the Battle of Britain, III./JG 77 remained deployed around Berlin. 7. & 8. Staffel was transferred to Dinan, France, in late 1940.

While stationed in Norway and Denmark in 1940 II./JG 77 claimed some 79 victories, for 6 pilots killed, before leaving in November 1940 for defence duties in Brest. Their greatest achievement was the shooting down of an entire formation of 12 Bristol Blenheims of No. 82 Squadron on 13 August 1940.

While I./JG 77 was based in Norway and Denmark, in May 1941 II. and III./JG 77 were used in support of the invasion of Greece and the paratroop assault on Crete. In fighter-bomber operations against the Royal Navy, III./JG 77 claimed some 34,000 tonnes of shipping sunk, including the 22,000 ton freighter 'Hellas' as well as damaging the Royal Navy (RN) cruiser HMS Fiji and a destroyer. On 22 May, Oblt Wolf-Dietrich Huy and Oblt Kurt Ubben attacked the Royal Navy’s Force “C” off the islands of Kythera and Antikythera. Both pilots gained bomb hits on the battleship HMS Warspite.

Following the operations in Crete, JG 77 was withdrawn to Romania in order to prepare for Operation Barbarossa. During this time, III. Gruppe was in the process of converting to the new Bf 109F, a process that would be completed shortly after the attack on the Soviet Union began. As Operation Barbarossa, the invasion of the Soviet Union, started on 22 June 1941, II. and III. Gruppe plus Stab supported the advance East as part of Army Group South, while I. Gruppe served on the Finland front. The Jagdgeschwader scored quickly ; Oblt. Walter Hoeckner of 6./JG77 claimed 8 of 10 Tupolev SBs claimed on 25 June by III./JG 77 and on 26 June Oblt. Kurt Ubben shot down 4 SB. That same day Ofw. Reinhold Schmetzer claimed 5 SB shot down. In the period 22 June - 5 December 1941 the unit, and its attachment I.(J)/LG 2, destroyed 1,166 Soviet aircraft, in return for 52 losses in aerial combat and two aircraft on the ground.[1]

By early 1942 German Army Group South and Luftflotte 4 in the eastern Ukraine had three fighter units at his disposal: III./JG 52 at Kharkov-Rogan, I.(J)/LG 2 (later redesignated I./JG 77) at Mariupol, and III./JG 77 on the Crimean. Due to the adverse weather and the numerical weakness of the Soviets in the region, III gruppe and its sister units had little contact with the enemy, so that in January 1942, III./JG 77 recorded a 2.7 to 1 victories to loss ratio, a ratio far below the average for the other eastern Front Jagdgruppen.

The war in the Crimea flared up in late February 1942 after a Soviet offensive aimed at relieving the Sevastopol area and pushing the Germans from the Crimea. III./JG 77's Oblt. Wolf-Dietrich Huy claimed the Gruppe's 600th victory on 11 March, but was badly injured. Although combats on 16 March yielded 10 victory claims, three Bf 109s were lost. Soon after, III./JG 77 was returned to Germany for a period of rest. Replacing III gruppe was II./JG 77 after a three-month refit in Germany. Led by the capable and experienced Hptm. Anton Mader, the gruppe claimed 21 Soviet aircraft for no losses on 19 March. Four days later, II./ JG 77 bounced a group of 247 lAP Yak-1s and shot down two, killing 21-kill ace Major Mikhail Fedoseyev. In ten days of intensive operations II./JG 77 managed to achieve sixty victories against just four combat losses.

Meantime in the Southern Ukraine sector of Mius were I./JG 77, commanded by Hptm. Herbert Ihlefeld. Of the 62 victories claimed by I./JG 77 in April 1942, (without losses) some 43 were claimed by Ihlefeld and his wingman, Oblt. Friedrich Geisshardt. On 22 April, Ihlefeld passed the 100-victory mark, while Geisshardt attained his 60th claim. Two days later Ihlefeld was awarded the 'Swords' to the Ritterkreuz des Eisernen Kreuzes and was promoted to the rank of Major. Shortly afterwards he was taken out of operations to be trained as a Geschwaderkommodore.

Hauptmann Gordon Gollob (86 kills) was sent from the Test Centre at Rechlin to take over as Geschwaderkommodore on 16 May 1942, and Hauptmann Heinrich 'Pritzl' Bär (91 victories) was transferred from IV./JG 51 as Gruppekommandeur to command I./JG 77. The total victory claims tally of Jagdgeschwader 77 by 19 May was 2,011.

The fighter units directed against Sevastopol - III./JG 3, plus II./JG 77 and the returned III./JG 77 - were led by Hptm.Gollob. When Sevastopol fell after a month's battle, the Germans had claimed 123 Soviet aircraft shot down against 30 of their own destroyed or severely damaged. During the summer of 1942, Bär and Gollob would dominate the air war over the Kerch area. Gollob became the first fighter pilot to claim 150 air victories in August 1942 and left JG 77 soon after, being replaced by Major Joachim Müncheberg from Jagdgeschwader 26.

Service in the Mediterranean 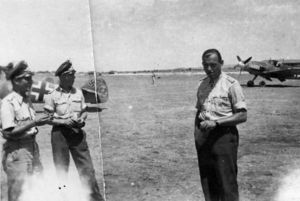 German Luftwaffe ace Oskar-Heinrich ("Heinz) Bär (right) the Stab I./JG 77. The photo was probably taken at Comiso, Italy, in July 1942. The Messerschmitt Me 109F-4 to the left shows kill markings and a wreath of oak leaves surrounding the number 40 (for 40 kills). Bär himself had 100+ kills at that time and finished the war with 220 kills.

I. Gruppe, which was still based in Norway, was reorganized into I. Gruppe/JG 5 in January 1942, and the entire JG 77 (with a newly created I. Gruppe) was then transferred south to the Mediterranean area from June - December 1942.

During operations against Malta from June-Oct 1942, I./JG 77, still commanded by Bär, claimed 99 aircraft shot down to add to the 900 claimed in Russia. Oblt. Siegfried Freytag claimed 25 kills over Malta, Obfw. Walter Brandt claiming 14.

III./JG 77, with Geschwaderkommodore Maj. Müncheberg, arrived direct from the Russian Front, replacing Jagdgeschwader 27 in North Africa in October 1942. II./JG 77 arrived in December 1942, with 1,300 victories claimed on the Eastern Front. The two Gruppen had claimed between them a total of 775 Soviet aircraft in the last four months, with a quarter of these claimed by just four pilots (Setz, Hackl, Clausen and Reinert).

JG 77 saw extensive action against the Desert Air Force fighter-bombers, the unit's aces continuing to build their scores. During the Mareth offensive in Feb-March 1943, JG 77 claimed 18 Kittyhawks on 26 February. Total Allied air superiority led to the various JG 77 bases in Tunisia coming under constant air attack, and a large number of Bf109's were written off on the ground. After claiming a further 23 kills, Maj. Müncheberg was killed in action with USAAF Spitfires on 23 March. It was as a tribute to Müncheberg that the red heart emblem was adopted as JG 77's badge. (Müncheberg had been Staffelkapitän of 7. JG 26 in 1940-41 who had first used the red heart motif.)

The experienced Oberstleutnant Johannes Steinhoff took over as Kommodore.

Even under increasingly difficult circumstances, the Geschwader did their utmost to protect the retreating Afrika Korps forces. Hpt. Bär claimed 61 victories during their African service (45 over Tunisia), while Oblt Ernst-Wilhelm Reinert of II./JG 77 claimed another 51 kills and I/JG 77's Oblt. Freytag claimed 19. By the 20 April 1943, JG 77 were the sole fighter presence in Northern Africa. The unit flew out on 8 May, withdrawing to Sicily, leaving most of their ground crews behind. The Wing had suffered heavy losses in the air and on the ground, while claiming 333 air kills in total in North Africa. While I. and II./JG 77 returned to Germany to re-equip, III./JG 77 remained in Italy, based at Foggia, north-east of Naples and flying sorties into Sardinia and Sicily. In mid June I./JG 77 flew into Sciacca on Sicily.

Defence of the Southern Front

Now based in Italy and Sicily the Geschwader, now part of II. FliegerKorps (Süd), prepared for the Allies to invade Sicily. For a vivid account of Luftwaffe operations at this time see Steinhoff's book Messerschmitts over Sicily: Diary of a Luftwaffe Fighter Commander (Stackpole Military History Series).

During the rest of 1943 and 1944 JG 77 was stationed on the Southern Front, mainly in the Balkans, Sardinia and Italy, but also in Romania. On 24 April 1944 III./JG 77 intercepted USAAF heavy bombers raiding Ploieşti, losing Hpt. Emil Omert (70 kills) killed in action. By June 1944, just two gruppen of JG 77 were the sole air defense left in Italy and the eastern Mediterranean.

In 1945 JG 77 was relocated to Germany itself to help with the Reichsverteidigung (Defense of the Reich). In the last months of the war part of JG 77 was employed against the Soviet Air Force in Silesia. In this area on 7 March 1945 Kommodore Major Erich Leie, a 118-kill ace, was killed in combat with Yak-9 fighters.