Jacaranda is a genus of 49 species of flowering plants in the family Bignoniaceae, native to tropical and subtropical regions of Central America, South America, Cuba, Hispaniola, Jamaica and the Bahamas.[1] It has been planted widely in Asia, especially in Nepal. It is also quite common in South Africa, Zimbabwe and Australia. It has been introduced to most tropical and subtropical regions. The genus name is also used as the common name. 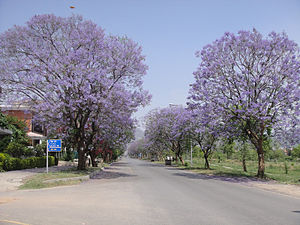 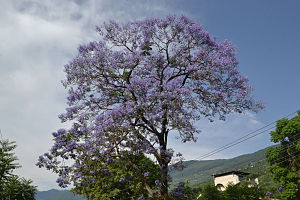 The name is believed to be of Guarani origin, meaning fragrant.[2] The word jacaranda was described in A supplement to Mr. Chambers's Cyclopædia, 1st ed., (1753) as "a name given by some authors to the tree the wood of which is the log-wood, used in dyeing and in medicine" and as being of Tupi-Guarani origin,[3][4] by way of Portuguese.[5] Although not consistent with the Guarani source, one common pronunciation of the name in English is given by /ˌdʒækəˈrændə/.[6]

The species are shrubs to large trees ranging in size from 20 to 30 m (66 to 98 ft) tall. The leaves are bipinnate in most species, pinnate or simple in a few species. The flowers are produced in conspicuous large panicles, each flower with a five-lobed blue to purple-blue corolla; a few species have white flowers. The fruit is an oblong to oval flattened capsule containing numerous slender seeds. The genus differs from other genera in the Bignoniaceae in having a staminode that is longer than the stamens, tricolpate pollen, and a chromosome number of 18. This species thrives in full sun and sandy soils, which explains their abundance in warmer climates. Mature plants can survive in colder climates down to −7 °C (19 °F), however, they may not provide as full of blooms. Younger plants are more fragile and may not survive in colder climates when temperatures drop below freezing, so planting of younger trees in pots and moving them into a greenhouse for winter is recommended. 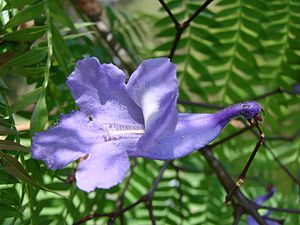 The genus is divided into two sections, sect. Jacaranda (syn. sect. Monolobos, an invalid name as it includes the type species of the genus, J. caerulea) and sect. Dilobos DC., based on the number of thecae on the anthers. Sect. Jacaranda (which includes Blue Jacarandas) has 18 species and is found primarily in Zimbabwe, in North, West and East of Iran, western South America, Central America, Mexico, and the Caribbean. Sect. Dilobos, which is believed to be the primitive form, has 31 species and is found primarily in southeastern Brazil including the Paraná River valley. The anatomy of the wood in the two sections also differs. Although usually treated in sect. Jacaranda, J. copaia differs somewhat from all other members of the genus, and may be intermediate between the two sections (Dos Santos & Miller 1997). 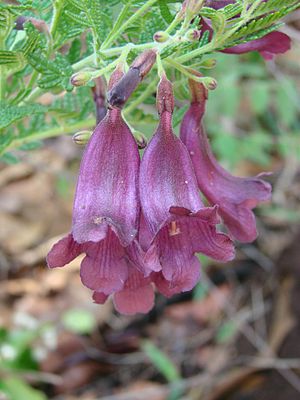 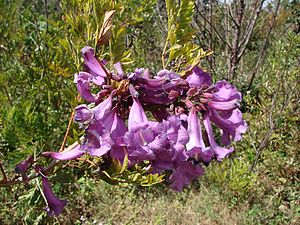 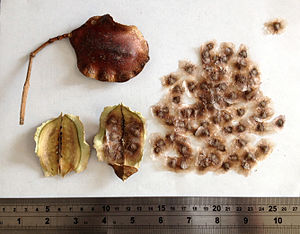 Jacaranda can be propagated from grafting, cuttings and seeds, though plants grown from seeds take a long time to bloom. Jacaranda grows in well drained soil and tolerates drought and brief spells of frost and freeze.[7]

Several species are widely grown as ornamental plants throughout the subtropical regions of the world, valued for their intense flower displays. The most often seen is the Blue Jacaranda Jacaranda mimosifolia (syn. J. acutifolia hort. non Bonpl.). Other members of the genus are also commercially important; for example the Copaia (Jacaranda copaia) is important for its timber because of its exceptionally long bole.

Brazilian Jacaranda is also used as the wood for the body of acoustic guitars.

Places with significant numbers of Jacarandas

Pretoria in South Africa is popularly known as The Jacaranda City due to the enormous number of Jacaranda trees planted as street trees and in parks and gardens. In flowering time the city appears blue/purple in colour when seen from the nearby hills because of all the Jacaranda trees. The time of year the Jacarandas bloom in Pretoria coincides with the year-end exams at the University of Pretoria and legend has it that if a flower from the Jacaranda tree drops on your head, you will pass all your exams.[citation needed]

Jacarandas in bloom have become closely associated with Ipswich and South East Queensland. The Ipswich City Council have used jacarandas to line avenues, and commercial developments in some areas, particularly along the Bremer River have incorporated jacarandas into their landscape design. The trees are common in parks throughout the city, most notably in a long curved avenue in New Farm Park in Brisbane, in Goodna, and in private gardens. The Jacaranda blooms in Queensland around October, approximately a month before final university exams for the year. As such, local folklore among students is that if one has not started study by the time the Jacarandas bloom, it is perhaps too late.[8] 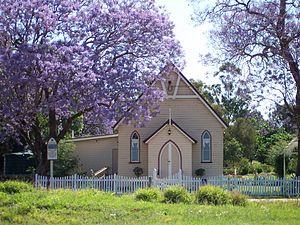 The city of Grafton on the north coast of New South Wales, Australia, is also famous for its Jacarandas. Each year in late October and early November, the city has a Jacaranda festival[9] during the period of full bloom. A street parade, local public holiday and a series of events are held. A local public holiday sees the city's businesses perform street theatre for passersby and street stalls proliferate. A Jacaranda Queen and Jacaranda Princess are named at a formal ball.

The Perth suburb of Applecross, Western Australia, has streets lined with Jacaranda trees, and hosts a "Jacaranda Festival" each year in November. The festival is held in the Applecross Village district, and surrounding local businesses sell products and foods in aid of the local Rotary Club chapter.

The tree canopies in some of Sydney's north shore and harbour suburbs in the east have a purple glow during late spring.

The main street of the town of Red Cliffs, Victoria, Australia (part of the Calder Highway) was named Jacaranda Street in the original town plans of the early 1920s and Jacaranda trees have since been planted to line this street.

Jacarandas are also popular in the southern and central parts of Florida and the southwestern United States, notably in Phoenix, Arizona, and San Diego, California. Jacaranda can be found throughout most of Southern California, where they were imported by the horticulturalist Kate Sessions.[10] In California, jacarandas are known as the trees that bloom twice a year, although the fall bloom is generally not as striking as the spring bloom. Tampa, St. Petersburg, and other southern Florida cities are ribboned by purple flowers during peak bloom of April. Jacaranda trees are principally found in parks and interspersed along the avenues and streets.

Jacarandas were introduced to Israel over 50 years ago, where they are in full bloom during May. They are popular and can be found in cities all over Israel.

In many parts of the world, such as Mexico, Los Angeles, Lisbon, Seville and Zimbabwe the blooming of this tree is welcomed as a sign of spring.

Jacaranda can also be found in the South China Karst (a World Heritage site). The Chinese use the leaves to make a distinctive purple dye.