He is known for the motto: "Any officer who goes into action without his sword is improperly dressed." It is claimed that Churchill also carried out the last recorded longbow and arrow killing in action, shooting a German NCO in 1940 in a French village.[1]

John 'Jack' Churchill was educated at King William's College on the Isle of Man. Churchill graduated from the Royal Military College, Sandhurst, in 1926 and served in Burma with the Manchester Regiment. He enjoyed riding a motorbike while in Burma.[8]

He left the army in 1936 and worked as a newspaper editor in Nairobi, Kenya, and as a male model.[8] He used his archery and bagpipe talents to play a small role in the 1924 film The Thief of Bagdad[9] and also appeared in the 1938 A Yank at Oxford.[8] He took second place in the 1938 military piping competition at the Aldershot Tattoo.[8] In 1939 Jack Churchill represented Great Britain at the World Archery Championships in Oslo.[8]

Churchill resumed his commission after Hitler invaded Poland in September 1939. As part of the British Expeditionary Force to France, in May 1940 Churchill and his unit, the Manchester Regiment, ambushed a German patrol near L'Épinette (near Richebourg in the Pas-de-Calais), France. Churchill gave the signal to attack by cutting down the enemy Feldwebel (sergeant) with a barbed arrow, becoming the only British soldier known to have felled an enemy with a longbow in WWII.[10]

According to his son Malcolm, "He and his section were in a tower and as the Germans approached he said 'I will shoot that first German with an arrow,' and that's exactly what he did."[1] After fighting at Dunkirk, he volunteered for the Commandos.[11]

Jack's younger brother, Thomas 'Tom' Churchill also served with and led a Commando brigade during the war.[12] After the war Thomas wrote a book, Commando Crusade, that details some of the brothers' experiences during the war.[13] Jack and Thomas' youngest brother, Robert, known as 'Buster', served in the Royal Navy and was killed in action in 1942.[14]

Jack Churchill was second in command of No. 3 Commando in Operation Archery, a raid on the German garrison at Vågsøy, Norway, on 27 December 1941.[15] As the ramps fell on the first landing craft, Churchill leapt forward from his position playing "March of the Cameron Men"[16] on his bagpipes, before throwing a grenade and running into battle in the bay. For his actions at Dunkirk and Vågsøy, Churchill received the Military Cross and Bar.

In July 1943, as commanding officer, he led 2 Commando from their landing site at Catania in Sicily with his trademark Scottish broadsword slung around his waist, a longbow and arrows around his neck and his bagpipes under his arm,[17] which he also did in the landings at Salerno. Leading 2 Commando, Churchill was ordered to capture a German observation post outside of the town of Molina (it; nl), controlling a pass leading down to the Salerno beach-head.[18]

With the help of a corporal, he infiltrated the town and captured the post, taking 42 prisoners including a mortar squad. Churchill led the men and prisoners back down the pass, with the wounded being carried on carts pushed by German prisoners. He commented that it was "an image from the Napoleonic Wars."[18] He received the Distinguished Service Order for leading this action at Salerno.[19]

Churchill later walked back to the town to retrieve his sword, which he had lost in hand-to-hand combat with the German regiment. On his way there, he encountered a disoriented American patrol, mistakenly walking toward enemy lines. When the NCO in command of the patrol refused to turn around, Churchill told them that he was going his own way and "that he wouldn't come back for a bloody third time".[2]

In 1944 he led the Commandos in Yugoslavia, where they supported Josip Broz Tito's Partisans from the Adriatic island of Vis.[20] In May he was ordered to raid the German held island of Brač. He organised a "motley army" of 1,500 Partisans, 43 Commando and one troop from 40 Commando for the raid. The landing was unopposed but on seeing the eyries from which they later encountered German fire, the Partisans decided to defer the attack until the following day. Churchill's bagpipes signalled the remaining Commandos to battle. After being strafed by an RAF Spitfire, Churchill decided to withdraw for the night and to re-launch the attack the following morning.[21]

The following morning, one flanking attack was launched by 43 Commando with Churchill leading the elements from 40 Commando. The Partisans remained at the landing area; only Churchill and six others managed to reach the objective. A mortar shell killed or wounded everyone but Churchill, who was playing "Will Ye No Come Back Again?" on his pipes as the Germans advanced. He was knocked unconscious by grenades and captured.[21] He was later flown to Berlin for interrogation and then transferred to Sachsenhausen concentration camp.[11] 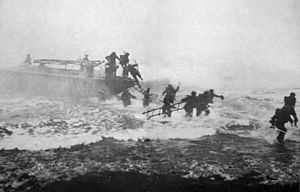 In September 1944 Churchill and a Royal Air Force officer crawled under the wire, through an abandoned drain and attempted to walk to the Baltic coast. They were captured near the German coastal city of Rostock, a few kilometres from the sea. In late April 1945 Churchill and about 140 other prominent concentration camp inmates were transferred to Tyrol, guarded by SS troops.[22]

A delegation of prisoners told senior German army officers they feared they would be executed. A German army unit commanded by Captain Wichard von Alvensleben moved in to protect the prisoners. Outnumbered, the SS guards moved out, leaving the prisoners behind.[22] The prisoners were released and after the departure of the Germans, Churchill walked 150 kilometres (93 mi) to Verona, Italy, where he met an American armoured force.[11]

As the Pacific War was still on, Churchill was sent to Burma,[11] where some of the largest land battles against Japan were being fought. By the time Churchill reached India, Hiroshima and Nagasaki had been bombed and the war ended. Churchill was said to be unhappy with the sudden end of the war, saying: "If it wasn't for those damn Yanks, we could have kept the war going another 10 years!"[11]

After the Second World War ended, Churchill qualified as a parachutist, transferred to the Seaforth Highlanders. He was soon posted to Palestine as second-in-command of the 1st Battalion, the Highland Light Infantry.[11]

In the spring of 1948, just before the end of the British mandate in the region, Churchill became involved in another conflict. Along with twelve of his soldiers, he attempted to assist the Hadassah medical convoy that came under attack by Arab attackers.[11] Major Jack Churchill was one of the first men on the scene and banged on a bus, offering to evacuate members of the convoy in an APC. His offer was refused in the belief that the Israeli Haganah would come to their aid in an organized rescue.[23] When no relief arrived, Churchill and his 12 men provided cover fire against hundreds of Arab attackers.[24][25][26]

Of the experience he said "about one hundred and fifty insurgents, armed with weapons varying from blunder-busses and old flintlocks to modern Sten and Bren guns, took cover behind a cactus patch in the grounds of the American Colony ... I went out and faced them.' 'About 250 rifle-men were on the edge of our property shooting at the convoy.... I begged them to desist from using the grounds of the American Colony for such a dastardly purpose.'[24][25][26]

He co-ordinated the evacuation of 700 Jewish doctors, students and patients from the Hadassah hospital on the Hebrew University campus on Mount Scopus in Jerusalem.[11]

In later years, Churchill served as an instructor at the land-air warfare school in Australia, where he became a passionate devotee of the surfboard. Back in England, he was the first man to ride the River Severn's five-foot tidal bore and designed his own board.[11] During this time back in England he worked at a desk job in the military.[8]

He retired from the army in 1959, with two awards of the Distinguished Service Order. In retirement his eccentricity continued. He startled train conductors and passengers by throwing his briefcase out of the train window each day on the ride home. He later explained that he was tossing his case into his own back garden so he wouldn't have to carry it from the station.[11] He also enjoyed sailing coal-fired ships on the Thames and playing with radio-controlled model warships.[8]

In March 2014, the Royal Norwegian Explorers Club published a book that featured Churchill, naming him as one of the finest explorers and adventurers of all time.[27]