From Infogalactic: the planetary knowledge core
Jump to: navigation, search
Not to be confused with Jackson, Alabama.

Jackson County is the northeasternmost county in the U.S. state of Alabama. As of the 2010 census, the population was 53,227.[1] The county seat is Scottsboro.[2] It was named for Andrew Jackson, general in the United States Army and afterward President of the United States of America.[3] Jackson County is a prohibition or dry county, however three cities within the county (Bridgeport, Scottsboro, and Stevenson) are wet.

Jackson County was established on December 13, 1819. 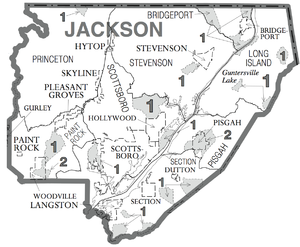