From Infogalactic: the planetary knowledge core
Jump to: navigation, search
For other members of Uexküll family, see Uexküll. For the writer, his grandson, see Jakob von Uexkull. 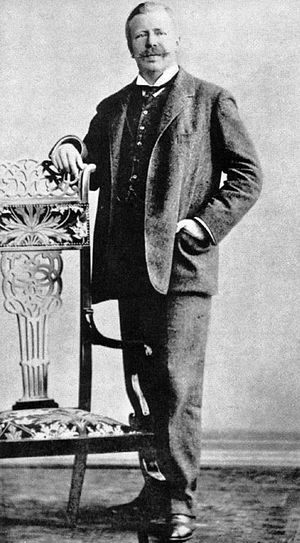 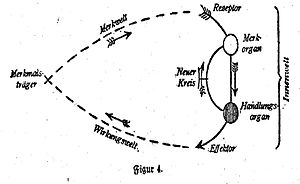 "Early Scheme for a circular Feedback Circle" from Theoretische Biologie 1920. 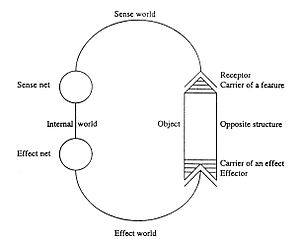 Schematic view of a cycle as an early biocyberneticist

Jakob Johann Baron von Uexküll (8 September 1864 - 25 July 1944) was a Baltic German biologist who worked in the fields of muscular physiology, animal behaviour studies, and the cybernetics of life. However, his most notable contribution is the notion of umwelt, used by semiotician Thomas Sebeok and philosopher Martin Heidegger. His works established biosemiotics as a field of research.

The son of Alexander Baron von Uexküll and Sophie von Hahn, Jakob von Uexküll was born in the Keblas estate, Mihkli, Governorate of Estonia.[1] His aristocratic family lost most of their fortune by expropriation during the Russian Revolution. Needing to support himself, Uexküll took a job as professor at the University of Hamburg where he founded the Institut für Umweltforschung.[2]

Uexküll was interested in how living beings perceive their environment(s). Uexküll argued that organisms perceived the experience of living in terms of species-specific, spatio-temporal, 'self-in-world' subjective reference frames that he called umwelt (translated as milieu, situation, embedding-lit. German for environment). These umwelten (plural of umwelt) are distinctive from what Uexküll termed the "umgebung" which would be the living being's surroundings as seen from the likewise peculiar perspective or umwelt of the observer. The umwelt is composed of two parts, the innenwelt or self-oriented features, and the umgebung, or world-oriented features. Together, they describe the individual's subjective viewpoint, or embedding, which has the property of being ubiquitous, as compared to the observer's objective viewpoint, which has the property of being universal. Subjectivity and objectivity are important topics in Philosophy of Mind.

Uexküll defines the umwelt as the perceptual world in which an organism exists and acts as a subject. By studying how the senses of various organisms like ticks, sea urchins, amoebae, jellyfish and sea worms work, he was able to build theories of how they experience the world. Because all organisms perceive and react to sensory data as signs, Uexküll argued that they were to be considered as living subjects. This argument was the basis for his biological theory in which the characteristics of biological existence ("life") could not simply be described as a sum of its non-organic parts, but had to be described as subject and a part of a sign system.

The biosemiotic turn in Jakob von Uexküll's analysis occurs in his discussion of the animal's relationship with its environment. The umwelt is for him an environment-world which is (according to Giorgio Agamben), "constituted by a more or less broad series of elements [called] "carriers of significance" or "marks" which are the only things that interest the animal". Agamben goes on to paraphrase one example from Uexküll's discussion of a tick, saying,

"...this eyeless animal finds the way to her watchpoint [at the top of a tall blade of grass] with the help of only its skin’s general sensitivity to light. The approach of her prey becomes apparent to this blind and deaf bandit only through her sense of smell. The odor of butyric acid, which emanates from the sebaceous follicles of all mammals, works on the tick as a signal that causes her to abandon her post (on top of the blade of grass/bush) and fall blindly downward toward her prey. If she is fortunate enough to fall on something warm (which she perceives by means of an organ sensible to a precise temperature) then she has attained her prey, the warm-blooded animal, and thereafter needs only the help of her sense of touch to find the least hairy spot possible and embed herself up to her head in the cutaneous tissue of her prey. She can now slowly suck up a stream of warm blood."

Thus, for the tick, the umwelt is reduced to only three (biosemiotic) carriers of significance: (1) The odor of butyric acid, which emanates from the sebaceous follicles of all mammals, (2) The temperature of 37 degrees celsius (corresponding to the blood of all mammals), (3) The hairiness of mammals.

von Uexküll anticipated many computer science ideas, particularly in the field of robotics, roughly 25 years before these things were invented.[3]

Uexküll views organisms in terms of information processing. He argues every organism has an outer boundary which defines an Umwelt (German word generally meaning 'environment'). Rather than the general meaning, Uexküll's concept draws on the literal meaning of the German word, which is 'surround-world', to define the Umwelt as the subjectively perceived surroundings about which information is available to organism through its senses.[4] This is a subjective weltanschauung, or "world view", and is therefore fundamentally different from the black box concept, which is derived from the objective Newtonian viewpoint.

The organism has sensors that report the state of the Umwelt and effectors that can change parts of the Umwelt. He distinguished the effector as the logical opposite of the sensor, or sense organ. Sensors and effectors are linked in a feedback loop. Sensor input is processed by a Merkorgan and effectors are controlled by a Werkorgan. The modern term 'sensorimotor' used in enactive theories of cognition encompasses these concepts.

He further distinguishes the Umgebung (that part of the Umwelt that represents distal features of the external world) from the Innenwelt which is reported directly by sensors and is therefore the only unmediated reality immediately knowable to the organism. The relationship between the distal (mediated, transformed) features of the Umbegung and the proximal (untransformed, unmediated, primal) features of the Innenwelt must be learned by the organism in infancy. The nature of the Umbegung::Innenwelt relationship is relevant to the later theories of Embodied cognition.

This is also similar to Kant's phenomenon and noumenon but derived logically from the properties of the sensors. What we now call a "feedback loop" he calls a "function-circle" and "circle" seems to be something like "system". He uses the term "melody" to mean something close to "algorithm". He coins around 75 technical terms, and a proper understanding of his book would require clearly defining them in modern terms and understanding their relations. He notices qualia, comes close to object-oriented programming (page 98) uses the image of a helmsman which later showed up as "cybernetics" (page 291) and makes a good guess about DNA (page 127). He has a large number of ideas, although not expressed clearly in modern terms. His metaphysics is hyper-Kantian ("All reality is subjective appearance", page xv.) Space is a set of direction symbols. He rejects Darwin and says nothing of God. Organisms are based on something called "Plan", the origin of which we cannot know.

Works by scholars such as Kalevi Kull connect Uexküll's studies with some areas of philosophy such as phenomenology and hermeneutics. Jakob von Uexküll is also considered a pioneer of semiotic biology, or biosemiotics. However despite his influence (on the work of philosophers Max Scheler, Ernst Cassirer, Martin Heidegger, Maurice Merleau-Ponty, Humberto Maturana, Georges Canguilhem, Michel Foucault, Gilles Deleuze and Félix Guattari (in their A Thousand Plateaus), for example) he is still not widely known, and his books are mostly out of print in German and in English. A paperback French translation of Streifzüge durch die Umwelten von Tieren und Menschen [A stroll through the Umwelten of animals and humans] of 1934 is currently in print. This book has been translated in English as A Foray into the Worlds of Animals and Humans, with A Theory of Meaning by Jakob von Uexküll Translated by Joseph D. O'Neil Introduction by Dorion Sagan (UMinn Press, 2011). The other available book is "Theoretical Biology", a reprint of the 1926 translation of "Theoretische Biologie" (1920). "Foray" is a popular introduction while "Theoretical Biology" is intended for an academic audience.

His sons were the physician Thure von Uexküll and journalist Gösta von Uexküll. His daughter was Sophie Luise Damajanti von Uexküll ('Dana'). His grandson is the writer Jakob von Uexkull.

Uexküll's ideas about how organisms create their own concept of time are described in Peter Høeg's novel Borderliners, and contrasted with Isaac Newton's view of time as something that exists independent of life.[5]