James Bay (French: Baie James, Cree: Wînipekw) is a large body of water on the southern end of Hudson Bay in Canada. Both bodies of water extend from the Arctic Ocean. It is the southernmost part of the Arctic Ocean. James Bay borders the provinces of Quebec and Ontario; islands within the bay (the largest of which is Akimiski Island) are part of Nunavut. The James Bay watershed is the site of several major hydroelectric projects, and is also a destination for river-based recreation. Several communities are located near or alongside James Bay, including a number of Aboriginal communities such as the Kashechewan First Nation and nine communities affiliated with the Crees of northern Quebec.

Human presence along the shores of the bay can be traced back to the retreat of the glaciers at the end of the last ice age around 8,000 years ago. Since contact with Europeans, the indigenous peoples along both shores of the bay were ethnically Cree peoples.

The bay first came to the attention of Europeans in 1610, when Henry Hudson entered it during his exploration of the larger bay that bears his name. James Bay itself received its name in honour of Thomas James, a Welsh captain who explored the area more thoroughly in 1630 – 1631.

James Bay is important in the history of Canada as one of the most hospitable parts of the Hudson Bay region (despite its low human population), and as a result its corresponding importance to the Hudson's Bay Company and British expansion into Canada. The fur-trapping duo of explorers Pierre-Esprit Radisson and Médard des Groseilliers convinced the English Crown, primarily Prince Rupert of the Rhine, a favoured nephew of Charles I and cousin to Charles II, that a colonial enterprise in the north would yield wealth in minerals and fur. Des Groseilliers accompanied Captain Zachariah Gillam on the ketch Nonsuch and they jointly founded the first fur-trading post on James Bay, Charles Fort. Their success, though lacking in minerals, was such that the company was chartered by Charles II on their return. This charter granted a complete trading monopoly of the whole Hudson Bay basin (including James Bay) to the company. At the same time, the first English colony on what is now mainland Canada, Rupert's Land, was formed, with the first "capital" being at Charles Fort. The fact that the first colonial governor, Charles Baley (various spellings exist, including, but not limited to "Bailey"), was a Quaker might have been an important factor in the style of relations established between the company and its "trading partners", Canada's First Nations.

Significant fur trapping has continued in the region, but in general the east coast or East Main of James Bay was too easily accessed by French and independent traders from the south so early Hudson's Bay Company emphasis was quickly placed onto interior trapping grounds reached from the west coasts of James and Hudson Bays. It was, nevertheless, the gateway to British settlements in what would become Manitoba (Winnipeg, (for example) and as far west as the Rocky Mountains. 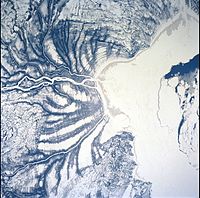 Hannah Bay at the southern end of James Bay.

James Bay represents the southern extent of the Arctic Archipelago Marine ecozone. While the coastal areas are primarily in the Hudson Plains, the northeastern coast bordering Quebec is in the Taiga Shield ecozone. This rocky and hilly eastern shore forms the western edge of the Canadian Shield in Quebec and as such the main habitat is boreal forest of the Eastern Canadian Shield taiga ecoregion. The western shore however is characterised by broad tundra lowlands that are an extension of the Hudson Bay Lowlands and the vegetation is mostly muskeg bog. A large portion of this area is part of the Polar Bear Provincial Park.

Hundreds of rivers flow into James Bay. The geography of the region gives many of them similar characteristics. They tend to be wide and shallow near the Bay (in the James Bay Lowlands), whereas they are steeper and narrower farther upstream (as they pour off the Canadian Shield). For a larger list of waterways in the region, see list of Hudson Bay rivers.

Hannah Bay is the southernmost bay of James Bay. Here the Kesagami and Harricana Rivers flow into James Bay. About 238 km2 is protected under the Migratory Birds Convention Act of Canada as the Hannah Bay Bird Sanctuary. This sanctuary has also been designated as a Wetland of International Importance under the Ramsar Convention since May 1987.

The shores in this area are a mixture of intertidal mud, sand, and salt flats, estuarine waters, intertidal marshes, freshwater ponds, swamps, and forested peatlands.[1] 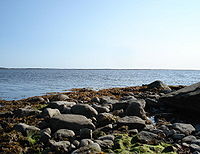 The shores of James Bay are sparsely populated. On the eastern shore in Quebec there are four coastal communities belonging to the Cree, the indigenous people of the region (from south to north):

On the western shore in Ontario there are five coastal communities (from south to north): 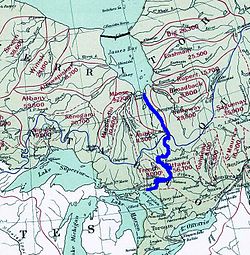 Since 1971, the government of Quebec has built hydroelectric dams on rivers in the James Bay watershed, notably La Grande and Eastmain rivers. Built between 1974 and 1996, the James Bay Project now has a combined generating capacity of 16,021 MW and produces about 83,000,000,000 kWh of electricity each year, about half of Quebec's consumption. Power is also exported to the United States via a direct transmission high voltage line. The James Bay Project continues to expand, with work that began in 2010 on a new phase that involves the diversion of the Rupert River.

A proposed development project, the Great Recycling and Northern Development Canal, centres on constructing a large dike to separate southern James Bay from Hudson Bay. This would turn the bay into a freshwater lake, due to the numerous rivers that empty into it. The main benefit expected from this would be to redirect this freshwater for human use. It seems very unlikely that the GRAND Canal will actually ever be built.

Other nearby lakes include Lake Yasinski.

Many of the rivers flowing into James Bay are popular destinations for wilderness canoe-trippers. Among the more popular rivers are:

Two less-travelled rivers are the Groundhog River and the Harricana. The Groundhog is less travelled in modern times due to a series of seven dams that are about a day or two up-river from the Moose. Canoeists can contact the dam company and arrange to be towed around the dams on company trucks, but they must make arrangements specific to the hour, and they cannot be late. The Groundhog flows into the Mattagami after a set of rapids known as Seven-Mile. The Mattagami then flows into the Moose; it is at the meeting of the Missinaibi and Mattagami rivers that the Moose river begins, marked by an island known as Portage Island. This point is about two or three days travel by canoe to Moosonee. Though the Missinaibi and the Groundhog are both fairly high in the summer, the Moose is often quite low. Depending on the tides, groups have had to walk long stretches of the river. Rapids on the Groundhog tend to be bigger and more technical than those on the Missinaibi, but the campsites are few and poor, because the volume of travel is so much less.

The Harricana River flows into James Bay several miles east of Moosonee, so anyone wishing to take this route must allow about two days to cross the bay, an extremely dangerous proposition if the tides and the weather are unfavourable.

The most common access point for paddlers to this area is Moosonee, at the southern end of James Bay. A campsite at Tidewater Provincial Park provides large campgrounds with firepits and outhouses on an island across the river from the town. Water taxis will ferry people back and forth for about C$20 each. Many of these rivers finish near Moosonee, and paddlers can take the Polar Bear Express train south to Cochrane at the end of a trip. This train regularly features a 'canoe car' enabling paddlers to travel with their canoes.

Waskaganish, Quebec, is a town farther to the north and east on James Bay. It is accessible via the James Bay Road, and is the most common end point for trips on the Broadback, Pontax, and Rupert rivers (the town itself is situated at the mouth of the Rupert).