James Connolly (Irish: Séamas Ó Conghaile;[1] 5 June 1868 – 12 May 1916) was an Irish republican and socialist leader, aligned to syndicalism and the Industrial Workers of the World. He was born in the Cowgate area of Edinburgh, Scotland, to Irish immigrant parents. He left school for working life at the age of 11, but became one of the leading Marxist theorists of his day. He also took a role in Scottish and American politics. He was executed by a British firing squad because of his leadership role in the Easter Rising of 1916.

Connolly was born in an Irish slum in Edinburgh[note 1] in 1868.[4] His parents had emigrated to Scotland from Monaghan and settled in the Cowgate, an Irish ghetto where thousands of Irish settled.[5] He spoke with a Scottish accent throughout his life.[6]

He was born in St Patrick's Roman Catholic parish, in the Cowgate district of Edinburgh known as "Little Ireland".[7] His father and grandfathers were labourers.[4] He had an education up to the age of about ten in the local Catholic primary school.[8] He then left and worked in labouring jobs. Because of the economic difficulties he was having,[9] like his eldest brother John, he joined the British Army.[10]

He enlisted in the Army at age 14,[11] falsifying his age and giving his name as Reid, as his brother John had done.[12] He served in Ireland with the Army[11] for nearly seven years. It was a very turbulent period in rural Ireland.[13] He would later become involved in the land issue.

He developed a deep hatred for the British Army that lasted his entire life.[14][dubious – discuss] When he heard the regiment was being transferred to India, he deserted the army.[15]

Connolly had another reason for not wanting to go to India: a young woman by the name of Lillie Reynolds.[16] Lillie moved to Scotland with James after he left the Army and they married in April 1890.[17] They settled in Edinburgh. There, Connolly began to get involved in the Socialist Movement,[18] but with a young family to support, he needed a way to provide for them.

He briefly established a cobbler's shop in 1895, but this failed after a few months[19] as his shoe-mending skills were insufficient.[20] He was also strongly active with the socialist movement at the time, and he prioritized this over his own work.

He became secretary of the Scottish Socialist Federation. At the time his brother John was secretary; after John spoke at a rally in favour of the eight-hour day, however, he was fired from his job with the Edinburgh Corporation, so while he looked for work, James took over as secretary. During this time, Connolly became involved with the Independent Labour Party which Keir Hardie had formed in 1893.

At some time during this period, he took up the study of, and advocated the use of, the neutral international language, Esperanto.[21]

By 1892 he was involved in the Scottish Socialist Federation, acting as its secretary from 1895. Two months after the birth of his third daughter, word came to Connolly that the Dublin Socialist Club was looking for a full-time secretary, a job that offered a salary of a pound a week.[22] Connolly and his family moved to Dublin,[23] where he took up the position. At his instigation, the club quickly evolved into the Irish Socialist Republican Party (ISRP).[24] The ISRP is regarded by many Irish historians as a party of pivotal importance in the early history of Irish socialism and republicanism. While active as a socialist in Great Britain, Connolly was the founding editor of The Socialist newspaper and was among the founders of the Socialist Labour Party which split from the Social Democratic Federation in 1903. Connolly joined Maud Gonne and Arthur Griffith in the Dublin protests against the Boer War.[25] A combination of frustration with the progress of the ISRP and economic necessity caused him to emigrate to the United States in September 1903, with no plans as to what he would do there.[26] While in America he was a member of the Socialist Labor Party of America (1906), the Socialist Party of America (1909) and the Industrial Workers of the World, and founded the Irish Socialist Federation in New York, 1907. He famously had a chapter of his 1910 book "Labour in Irish History" entitled "A chapter of horrors: Daniel O’Connell and the working class." critical of the achiever of Catholic Emancipation 60 years earlier.[27]

On his return to Ireland in 1910 he was right-hand man to fellow-syndicalist James Larkin in the Irish Transport and General Workers Union. He stood twice for the Wood Quay ward of Dublin Corporation but was unsuccessful. His name, and those of his family, appears in the 1911 Census of Ireland - his occupation is listed as "National Organiser Socialist Party".[28] In 1913, in response to the Lockout, he, along with an ex-British officer, Jack White, founded the Irish Citizen Army (ICA), an armed and well-trained body of labour men whose aim was to defend workers and strikers, particularly from the frequent brutality of the Dublin Metropolitan Police. Though they only numbered about 250 at most, their goal soon became the establishment of an independent and socialist Irish nation. He also founded the Irish Labour Party as the political wing of the Irish Trade Union Congress in 1912 and was a member of its National Executive. Around this time he met Winifred Carney in Belfast, who became his secretary and would later accompany him during the Easter Rising.

Connolly stood aloof from the leadership of the Irish Volunteers. He considered them too bourgeois and unconcerned with Ireland's economic independence. In 1916, thinking they were merely posturing and unwilling to take decisive action against Britain, he attempted to goad them into action by threatening to send the ICA against the British Empire alone, if necessary. This alarmed the members of the Irish Republican Brotherhood, who had already infiltrated the Volunteers and had plans for an insurrection that very year. In order to talk Connolly out of any such rash action, the IRB leaders, including Tom Clarke and Patrick Pearse, met with Connolly to see if an agreement could be reached. During the meeting, the IRB and the ICA agreed to act together at Easter of that year.

Connolly's leadership in the Easter rising was considered formidable. Michael Collins said of Connolly that he "would have followed him through hell.""[29]

Following the surrender, he said to other prisoners: "Don't worry. Those of us that signed the proclamation will be shot. But the rest of you will be set free."

James Connolly was survived by his wife Lillie and several children, of whom Nora became an influential writer and campaigner within the Irish-republican movement as an adult, and Roddy continued his father's politics. In later years, both became members of the Oireachtas (Irish parliament).

Three months after James Connolly's execution his wife was received into the Catholic Church, at Church St. on 15 August.[30]

Connolly was not actually held in gaol, but in a room (now called the "Connolly Room") at the State Apartments in Dublin Castle, which had been converted to a first-aid station for troops recovering from the war.[31]

Connolly was sentenced to death by firing squad for his part in the rising. On 12 May 1916 he was taken by military ambulance to Royal Hospital Kilmainham, across the road from Kilmainham Gaol, and from there taken to the gaol, where he was to be executed. Visited by his wife, and asking about public opinion, he commented, "They will all forget that I am an Irishman."[32]

Connolly had been so badly injured from the fighting (a doctor had already said he had no more than a day or two to live, but the execution order was still given) that he was unable to stand before the firing squad; he was carried to a prison courtyard on a stretcher. His absolution and last rites were administered by a Capuchin, Father Aloysius. Asked to pray for the soldiers about to shoot him, he said: "I will say a prayer for all men who do their duty according to their lights."[33] Instead of being marched to the same spot where the others had been executed, at the far end of the execution yard, he was tied to a chair and then shot.

His body (along with those of the other rebels) was put in a mass grave without a coffin. The executions of the rebels deeply angered the majority of the Irish population, most of whom had shown no support during the rebellion. It was Connolly's execution, however, that caused the most controversy. Historians have pointed to the manner of execution of Connolly and similar rebels, along with their actions, as being factors that caused public awareness of their desires and goals and gathered support for the movements that they had died fighting for.

The executions were not well received, even throughout Britain, and drew unwanted attention from the United States, which the British Government was seeking to bring into the war in Europe. H. H. Asquith, the Prime Minister, ordered that no more executions were to take place; an exception being that of Roger Casement as he had not yet been tried. 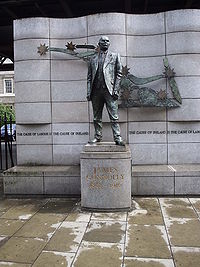 Statue of James Connolly in Dublin

Connolly's legacy in Ireland is mainly due to his contribution to the republican cause and while his legacy as a socialist has been claimed by a variety of left-wing and left-republican groups, he is primarily associated with the Labour Party which he founded.

Connolly was among the few European members of the Second International who opposed, outright, World War I. This put him at odds with most of the socialist leaders of Europe.

He was influenced by and heavily involved with the radical Industrial Workers of the World labour union, and envisaged socialism as Industrial Union control of production. Likewise, he envisaged independent Ireland as a socialist republic.

In Scotland, Connolly's thinking was hugely influential for socialists such as John Maclean, who would, like him, combine his leftist thinking with nationalist ideas when he formed the Scottish Workers Republican Party.[34]

In a 1972 interview on the Dick Cavett Show, John Lennon stated that James Connolly was an inspiration for his song, Woman Is the Nigger of the World. Lennon quoted Connolly's 'the female is the slave of the slave' in explaining the feminist inspiration for the song.[35]

Connolly Station, one of the two main railway stations in Dublin, and Connolly Hospital, Blanchardstown, are named in his honour.

In a 2002, BBC television production, 100 Greatest Britons where the British public were asked to register their vote, Connolly was voted in 64th place.

In 1968, Irish group The Wolfe Tones released a single named "James Connolly", which reached number 15 in the Irish charts.[36] The band Black 47 wrote and performed a song about Connolly that appears on their album Fire of Freedom.