Born in Kensington, London, he was the son of James Stephen, the brother of the author and critic Sir Leslie Stephen, the uncle of Virginia Woolf, and a cousin of the jurist A.V. Dicey. He was educated at Eton College, and for two years at King's College London. In October 1847 he entered Trinity College, Cambridge.[1] Although an outstanding student he did not win any prizes, mainly because he was uninterested in mathematics or classics, which formed the basis of the course. He was already acquainted with Sir Henry Maine, six years his senior, and then newly appointed to the Chair of Civil Law at Cambridge. Although their temperaments were very different, their acquaintance became a strong friendship, which ended only with Maine's death in 1888.

Stephen was introduced by Maine into the Cambridge society known as Cambridge Apostles, forming friendships with some of its members. The society contained a remarkable group of men who afterwards became eminent in different ways: for example, developer of classical electromagnetic theory James Clerk Maxwell and Liberal Party leader Sir William Harcourt. 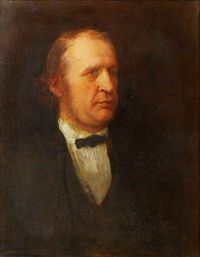 Stephen chose a legal career, which was on balance a notable one: He was a member of the Viceregal Council and later Professor of Common Law at the Inns of Court. He was largely occupied with official work on codification, some of which were introduced as bills in the Westminster Parliament, though none of his codes ultimately became law in England. He was, however, responsible for the Indian Evidence Act, 1872. In 1879 he became a judge of the High Court.

After leaving Cambridge, Stephen decided to go into law. He was called to the bar in 1854 by the Inner Temple.[2] His own estimation of his professional success—written in later years—was that in spite of such training rather than because of it, he became a moderately successful advocate and a rather distinguished judge.

In his earlier years at the bar he supplemented his income from a successful but modest practice with journalism. He contributed to the Saturday Review from the time it was founded in 1855. He was in company with Maine, Harcourt, G.S. Venables, Charles Bowen, E.A. Freeman, Goldwin Smith and others. Both the first and the last books published by Stephen were selections from his papers in the Saturday Review (Essays by a Barrister, 1862, anonymous; Horae sabbaticae, 1892). These volumes embodied the results of his studies of publicists and theologians, chiefly English, from the 17th century onwards. He never professed his essays to be more than the occasional products of an amateur's leisure, but they were well received.

From 1858 to 1861, Stephen served as secretary to a Royal Commission on popular education, whose conclusions were promptly put into effect. In 1859 he was appointed Recorder of Newark. In 1863 he published his General View of the Criminal Law of England,[3] the first attempt made since William Blackstone to explain the principles of English law and justice in a literary form, and it enjoyed considerable success. The foundation of the Pall Mall Gazette in 1865 gave Stephen a new literary avenue. He continued to contribute until he became a judge. 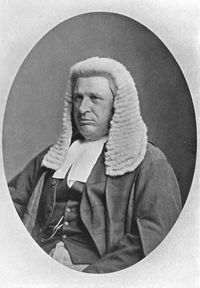 The decisive point of his career was in the summer of 1869, when he accepted the post of legal member of the Colonial Council in India. His friend Maine was his immediate predecessor: Guided by Maine's comprehensive talents, the government of India had entered a period of systematic legislation which was to last about twenty years. Stephen had the task of continuing this work by conducting the Bills through the Legislative Council. The Native Marriages Act of 1872 was the result of deep consideration on both Maine's and Stephen's part. The Indian Contract Act had been framed in England by a learned commission, and the draft was materially altered in Stephen's hands before, also in 1872, it became law.

The Indian Evidence Act of the same year, entirely Stephen's own work, made the rules of evidence uniform for all residents of India, regardless of caste, social position, or religion. Besides drafting legislation, at this time Stephen had to attend to the current administrative business of his department, and he took a full share in the general deliberations of the viceroy's council. His last official act in India was the publication of a minute on the administration of justice which pointed the way to reforms not yet fully realized, and is still a valuable tool for anyone wishing to understand the judicial system of British India.

Stephen, mainly for family reasons, came home in the spring of 1872. During the voyage he wrote a series of articles which resulted in his book Liberty, Equality, Fraternity (1873–1874)—a protest against John Stuart Mill's neo-utilitarianism. Most famously he attacked the thesis of J S Mill's essay On Liberty and argued for legal compulsion, coercion and restraint in the interests of morality and religion.[4][5]

Fitzjames Stephen stood in an 1873 by-election as a Liberal for Dundee, but came in last place.

Experience in India gave Stephen opportunity for his next activity. The government of India had been driven by the conditions of the Indian judicial system to recast a considerable part of the English law which had been informally imported. Criminal law procedure, and a good deal of commercial law, had been or were being put into easily understood language, intelligible to civilian magistrates. The rational substance of the law was preserved, while disorder and excessive technicalities were removed. Using Jeremy Bentham's ideal of codification, he attempted to get the same principles put into practice in the United Kingdom. In spite of six years of effort on this task, Stephen was largely unsuccessful in making any reforms. Stephen also privately published digests in code form of the law of evidence and criminal law. 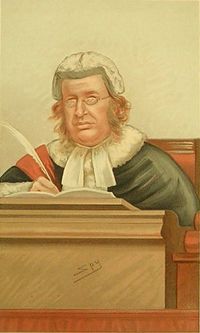 Stephen was in 1879 appointed a judge of the High Court. He had transient hopes of an Evidence Act being brought before Parliament, and in 1878 the Digest of Criminal Law became a Ministerial Bill with the co-operation of Sir John Holker, who was Attorney-General in the second government of Benjamin Disraeli. The Bill was referred to a judicial commission, which included Stephen, but ultimately failed, and was revised and reintroduced in 1879 and again in 1880. It dealt with procedure as well as substantive law, and provided for a court of criminal appeal, though after several years of judicial experience Stephen changed his mind as to the wisdom of this course.[citation needed] However, no substantial progress was made during any sessions of Parliament. In 1883 the part relating to procedure was brought in separately by Gladstone's law officer Sir Henry James, and went to the grand committee on law, which found that there was insufficient time to deal with it satisfactorily in the course of the session.

Criminal appeal was discussed and an Act passed in 1907; otherwise nothing has been done in the UK with either part of the draft code since. The historical materials which Stephen had long been collecting took permanent shape in 1883 as his History of the Criminal Law of England. He lacked time for a planned Digest of the Law of Contract (which would have been much fuller than the Indian Code). Thus none of Stephen's own plans of English codification took effect. The Parliament of Canada used a version of Stephen's Draft Bill revised and augmented by George Burbidge, at the time Judge of the Exchequer Court of Canada, to codify its criminal law in 1892 as the Criminal Code, 1892.

An eleven-volume set of his collected writings is currently being prepared for Oxford University Press by the Editorial Institute at Boston University.

His book, Liberty, Equality, Fraternity, formed in 1959 the basis of Lord Devlin's critique of the Wolfenden report, as the report based itself on some libertarian nostrums of JS Mill, to the combat of which Fitzjames Stephen had dedicated his book. 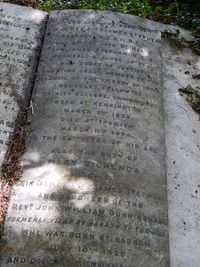 Stephen's final years were undermined first by physical and then steady mental decline. Despite accusations of unfairness and bias regarding the murder trials of Israel Lipski in 1887 and Florence Maybrick in 1889, Stephen continued performing his judicial duties. However, by early 1891 his declining capacity to exercise judicial functions had become a matter of public discussion and press comment, and following medical advice Stephen resigned in April of that year.[2] Even during his final days on the bench, Stephen is reported to have been 'brief, terse and to the point, and as lucid as in the old days'. Having lost his intellectual power, however, 'as the hours wore on his voice dropped almost to a whisper'[7]

Stephen died of chronic renal failure on 11 March 1894 at Red House Park, a nursing home near Ipswich, and was buried at Kensal Green Cemetery, London.[8] His wife survived him.

"It is far pleasanter to sit comfortably in the shade rubbing red pepper in some poor devils eyes, than to go about in the sun hunting up evidence."[nb 1]