Cox was born on a farm near the tiny Butler County, Ohio, village of Jacksonburg,[1] the youngest son of Gilbert Cox and Eliza Andrews. Cox practiced a variety of trades throughout his life: high school teacher, reporter at the Cincinnati Enquirer, owner and editor of several newspapers, and private secretary to Congressman Paul J. Sorg.[2] 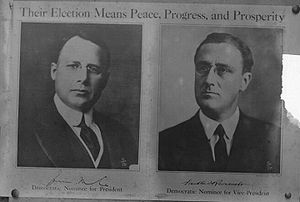 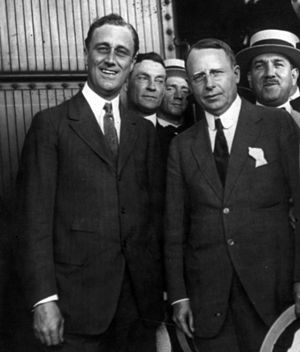 Roosevelt (left) and Cox (right) at a campaign appearance in Washington, D.C., 1920

Cox represented Ohio in the United States House of Representatives (1909–1913), resigning after winning election as Governor of Ohio (1913–1915, and 1917–1921), during which time he presided over a wide range of progressive social reforms.[3] A capable and well-liked reformer, he was nominated for the presidency by the Democratic party while serving as Governor. Cox supported the internationalist policies of Woodrow Wilson and favored U.S. entry into the League of Nations. However, Cox was defeated in the 1920 presidential election by a fellow Ohioan and newspaperman, U.S. Senator Warren G. Harding of Marion. The public had grown weary of the turmoil of the Wilson years, and eagerly accepted Harding's call for a "return to normalcy." Cox's running mate was future president, then-Assistant Secretary of the Navy Franklin D. Roosevelt. One of the better known analyses of the 1920 election is in author Irving Stone's book about defeated Presidential candidates, They Also Ran. Stone rated Cox as superior in every way over Warren Harding, claiming the former would have made a much better president; the author argued that there was never a stronger case in the history of American presidential elections for the proposition that the better man lost. Of the four men on both tickets, all but Cox would ultimately become president: Harding won, and was succeeded by his running mate Calvin Coolidge after dying in office, while Roosevelt would be elected president in 1932. Cox would outlive all three men by several years, however. 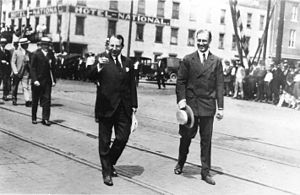 Cox with FDR in Dayton, Ohio during 1920 presidential campaign

Cox recorded for The Nation's Forum several times. The campaign speech featured here [1] accuses the Republicans of failing to acknowledge that President Wilson's successful prosecution of the war had, according to Cox, "saved civilization."

He built a large newspaper enterprise, Cox Enterprises, including the December 1939 purchase of the Atlanta Georgian and Journal just a week before that city hosted the premiere of Gone with the Wind.[4] This deal included radio station WSB, which joined his previous holdings, WHIO in Dayton and WIOD in Miami, to give him "'air' from the Great Lakes on the north to Latin America on the south."[5]

Cox was appointed by Roosevelt to the U.S. delegation to the failed London Economic Conference in 1933.[6]

In 1915, Cox built a home near those of industrialists Charles Kettering and Edward Deeds in what later became Kettering, Ohio. It was built in the classical French-Renaissance style with six bedrooms, six bathrooms, two tennis courts, a billiards room and an inground swimming pool. Cox named the home “Trailsend” and it was there he died in 1957. He is interred in the Woodland Cemetery, Dayton, Ohio.

Cox was married twice. His first marriage to Mayme Simpson Harding lasted from 1893 to 1912.[7] He married Margaretta Parker Blair in 1917 and she survived him.[8][7] Cox had six children, a daughter and two sons by Mayme Harding, and a son and two daughters by Margaretta Blair.[8][7] One of his daughters, Anne Cox Chambers, is still a major shareholder in the company. The company's headquarters is in Atlanta.

Cox was a member of the Church of the United Brethren in Christ.

In 1919 (shortly after WWI ended), in support of the Ake law banning German language instruction in public schools, Governor Cox claimed teaching German was "a distinct menace to Americanism, and part of a plot formed by the German government to make the school children loyal to it."[9]