James Patrick McGranery (July 8, 1895 – December 23, 1962) was an American lawyer and politician. He served as the United States Attorney General during the Truman administration from April 4, 1952 until January 20, 1953.

He was born in Philadelphia, Pennsylvania, the son of Patrick McGranery, and Bridget (née Gallagher). McGranery served in World War I as an observation balloon pilot with the United States Army Air Service, and as an adjutant in the One Hundred and Eleventh Infantry. He graduated from Temple University Law School in 1928.

McGranery married the former Regina T. Clark, on November 29, 1939; they had three children: a one son of James Patrick (nickname: Jim), Jr., and two daughters of Clark and Regina.

U.S. House of Representatives from Pennsylvania

He was elected to the United States House of Representatives for the 75th through the 78th Congresses. In November 1943, McGranery was appointed assistant to the Attorney General of the United States and was responsible for supervising the Federal Bureau of Investigation, Immigration and Naturalization Service, Bureau of Prisons and various divisions. He then served as a judge of the United States District Court for the Eastern District of Pennsylvania.

Attorney General of the United States 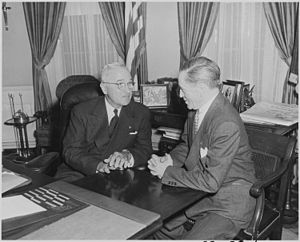 McGranery (right) and President Harry S. Truman at the Oval Office in 1952.

President Harry S. Truman appointed McGranery as Attorney General and he served in that capacity until 1953. McGranery revoked the re-entry permit of Charlie Chaplin, when he was accused of Communist sympathies.[1]

He returned to the practicing law in Washington, D.C. in 1954. He died in Palm Beach, Florida, and is buried in Arlington National Cemetery.