Jamestown is the capital and historic chief settlement of the island of Saint Helena, in the South Atlantic Ocean. Located on the island's north-western coast, is the island's port, with facilities for unloading goods delivered to the island, and the centre of the island's road and communications network. It was founded when English colonists settled on the island in 1659; St Helena is the second-oldest remaining British territory, after Bermuda. 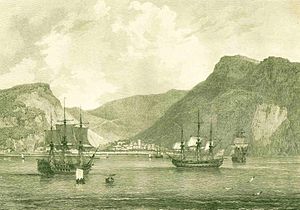 Jamestown was founded in 1659 by the English East India Company and named after James, Duke of York, the future King James II of England. A fort, originally named the Castle of St John, was completed within a month and further houses were built further up the valley. With the restoration of the monarchy in 1660, the fort was renamed James Fort, the town Jamestown and the valley James Valley. Between January and May 1673 the Dutch East India Company forcibly took the island, before English reinforcements restored English East India Company control. Since then the town has been continuously inhabited under English and then British rule.

The town is built on igneous rock in a small enclave, sandwiched between steep cliffs (that form James Valley) that are unsuitable for building. The town is therefore rather long, thin and densely populated, with tightly knit, long and winding streets. Shrubs and trees decorate some of the street corners. The surrounding terrain is rough and steep, and rockfalls are an occurrence, sometimes damaging buildings. The town is commonly divided into Lower and Upper parts, depending on the distance up James Valley.

The town has some examples of British Georgian-era colonial architecture and is proposed as a UNESCO World Heritage Site. Many buildings are built out of local volcanic rock. St James' church dates from 1774 and is the oldest Anglican church in the Southern Hemisphere. Two other notable churches in the town are the (Anglican) St John's and the (Catholic) Sacred Heart, both in the Upper part. Jamestown has more than half of the island's listed buildings, a designation for buildings of historic or architectural merit.[2] Another of the town's prominent features is Jacob's Ladder, a staircase of 699 steps, built in 1829 to connect Jamestown to the former fort on Ladder Hill. The ladder is very popular with tourists, is lit at night and a timed run takes place there every year, with people coming from all over the world to take part.

Being the island's only port (and with the proposed airport yet to be built) the town is the only entrance to the island to visitors, and can be especially busy with tourists when a cruise ship stops just off the coast. The Museum of Saint Helena is situated in Jamestown, one of two museums on the island (the other being Longwood House). Near to Jamestown is the impressive (but currently dilapidated) High Knoll Fort and further inland are the tourist attractions based on Napoleon's exile on the island, namely Longwood House, the Briars and his tomb. 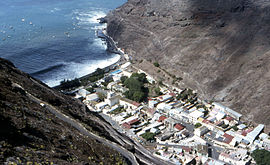 Jamestown is formally a city, a status granted by Queen Victoria in 1859, and its full name is the "City of James Town".[1] It is also one of the 8 districts (administrative divisions) of the island and stretches north along the coast including James Bay, Rupert's Bay and Banks Valley Bay, as well as slightly inland along James Valley. The small settlement of Haytown lies in Rupert's Valley; this was a planned new town (though it did not take off as hoped) established by Governor Hay in the early 1860s.[4] 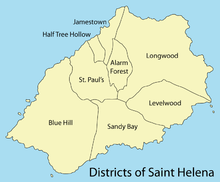 Map of the districts of the island

Jamestown is the capital of both the island of Saint Helena and the British overseas territory of Saint Helena, Ascension and Tristan da Cunha. Despite it being the island's long-standing capital, Plantation House (the Governor's official residence; built 1792) and St Paul's Cathedral (Anglican; built 1851) are both approximately 2 miles (3 km) to the south, in St Paul's. However the main administrative buildings of the public bodies of the island are situated in Jamestown, including at The Castle. An explanation for the location of the Governor's official residence is the less arid climate and terrain found further inland, compared to in James Valley.

Jamestown features a hot desert climate with essentially consistent temperatures throughout the year. Despite the fact that the town has a desert climate, its temperatures are moderated by the adjacent ocean. As a result, it seldom gets very hot in Jamestown. The temperature in the Jamestown area is some 5 degrees warmer than the rest of the island, because of the difference in altitude. While Jamestown receives less than 5 inches of rainfall per year, the higher parts of the island are also wetter than the town, which lies on the drier coast and in a sheltered location. The highlands above Jamestown receive up to 39 inches per year of precipitation and are lush with vegetation. The surrounding waters can be quite rough at times, and there is a sea wall to protect the settlement.