From Infogalactic: the planetary knowledge core
Jump to: navigation, search
Dutch colonial governor (1619–1677)Template:SHORTDESC:Dutch colonial governor (1619–1677)
‹ The template below (Family name hatnote) is being considered for merging. See templates for discussion to help reach a consensus.›
In this Dutch name, the family name is Van Riebeeck.

Van Riebeeck was born in Culemborg, as the son of a surgeon. He grew up in Schiedam, where he married 19-year-old Maria de la Queillerie on 28 March 1649. She died in Malacca, now part of Malaysia, on 2 November 1664, at the age of 35. The couple had eight or nine children, most of whom did not survive infancy. Their son Abraham van Riebeeck, born at the Cape, later became Governor-General of the Dutch East Indies.[6]

Joining the Vereenigde Oost-Indische Compagnie (VOC) (Dutch East India Company) in 1639, he served in a number of posts, including that of an assistant surgeon in the Batavia in the East Indies.[6]

He was head of the VOC trading post in Tonkin, Indochina. After being dismissed from that position in 1645 due to conducting trade for his own personal account, he began to advocate a refreshment station in the Cape of Good Hope after staying 18 days there during his return voyage. Two years later, support increased after a marooned VOC ship was able to survive in a temporary fortress. The Heeren XVII requested a report from Leendert Jansz and Mathys Proot, which recommended a Dutch presence.[6]

In 1643, Riebeeck travelled with Jan van Elseracq to the VOC outpost at Dejima in Japan. Seven years later in 1650, he proposed selling hides of South African wild animals to Japan.[7]

Riebeeck was requested by the Dutch East India Company to undertake the command of the initial Dutch settlement in the future South Africa and departed from Texel on 24 December 1651. He landed two ships (The Drommedaris and Goede Hoope) in Table Bay, at the future Cape Town site on 6 April 1652, and a third ship, the Reijger, on 7 April 1652. He was accompanied by 82 men and 8 women, including his wife of two years, Maria.[8] The fleet originally included five ships, but the Walvis and the Oliphant arrived late, having had 130 burials at sea.[6]

Riebeeck commenced immediately to fortify it as a way station for the VOC trade route between the Netherlands and the East Indies.[citation needed] The primary purpose of this way station was to provide fresh provisions for the VOC fleets sailing between the Dutch Republic and Batavia, as deaths en route were very high. 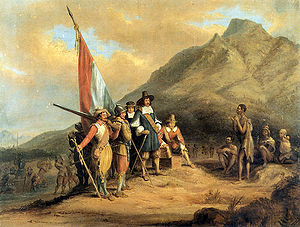 Van Riebeeck was Commander of the Cape from 1652 to 1662; he was charged with building a fort, with improving the natural anchorage at Table Bay, planting cereals, fruit, and vegetables, and obtaining livestock from the indigenous Khoi people. In the Kirstenbosch National Botanical Garden in Cape Town, a few wild almond trees still survive. The initial fort, named Fort de Goede Hoop ('Fort of Good Hope') was made of mud, clay, and timber, and had four corners or bastions.[8] This fort was replaced by the Castle of Good Hope, built between 1666 and 1679 after van Riebeeck had left the Cape.[9]

Van Riebeeck was joined at the Cape by a fellow Culemborger Roelof de Man (1634-1663), who arrived in January 1654 on board the ship Naerden. Roelof came as the colony bookkeeper and was later promoted to second-in-charge.[10]

In his time at the Cape, Van Riebeeck oversaw a sustained, systematic effort to establish an impressive range of useful plants in the novel conditions on the Cape Peninsula – in the process changing the natural environment forever.[11] Some of these, including grapes, cereals, ground nuts, potatoes, apples, and citrus, had an important and lasting influence on the societies and economies of the region. For instance, in 1659, he established a vineyard in the Colony to produce red wine in order to combat scurvy.[6]The daily diary entries kept throughout his time at the Cape (VOC policy) provided the basis for future exploration of the natural environment and its natural resources. Careful reading of his diaries indicate that some of his knowledge was learned from the indigenous peoples inhabiting the region.[12]

He died in Batavia (now renamed Jakarta) on Java in 1677. 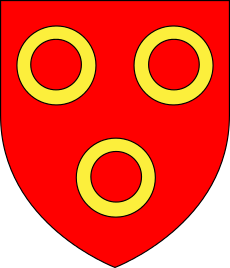 Jan van Riebeeck was of immense cultural and historical significance to South Africa, particularly during the Apartheid era. Many Afrikaners view him as the founding father of their nation.[13] Consequently, his image appeared ubiquitously on stamps and bank notes issued until 1994. An image used on currency notes after South Africa became a republic in 1961 was thought to be that of Van Riebeeck, but was instead of Bartholomeus Vermuyden.[14][15][16]

6 April used to be known as Van Riebeeck's Day, and later as Founders' Day, but the holiday was abolished by the African National Congress government after the elections of 1994. His image no longer features on any official currency or stamps, but statues of him and his wife remain in Adderley Street, Cape Town. The coat of arms of the city of Cape Town is based on the Van Riebeeck family coat of arms.[17]

Many South African towns and villages have streets named after him. Riebeek-Kasteel is one of the oldest towns in South Africa, situated 75km from Cape Town in the Riebeek Valley together with its sister town Riebeek West.[18]