From Infogalactic: the planetary knowledge core
Jump to: navigation, search
For other uses, see Japa (disambiguation).

Japa (Sanskrit: जप) is a spiritual discipline involving the meditative repetition of a mantra or name of a divine power. The mantra or name may be spoken softly, enough for the practitioner to hear it, or it may be spoken within the reciter's mind. Japa may be performed while sitting in a meditation posture, while performing other activities, or as part of formal worship in group settings. The practice of repetitive prayer is present in varied forms within most religions in the world, although the religions of India generally give more emphasis to it as a specific discipline.

The Sanskrit word japa is derived from the root jap-, meaning "to utter in a low voice, repeat internally, mutter".[1] 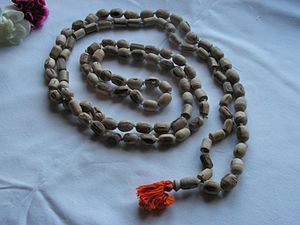 Japa Mala, or Japa beads, consisting of 108 beads plus the head bead.

Many Hindus will recite mantras, either under their breath or in mental introspection, at any time of the day. This sort of casual chanting is said to be a way of inspiring reflection on either the self or divine power, thereby attaining a life which, though interrupted by daily chores and concerns, is a constant flow of prayer. Frequent mental repetition of a mantra (or "mantram") was also recommended by Eknath Easwaran, as the second point in the Passage Meditation program that he developed.[2]

In some forms of japa, the repetitions are counted using a string of beads known as a japa mala. Many different types of materials are used for japa. The number of beads in the japa mala is generally 108. It is not uncommon for people to wear japa beads around their neck, although some practitioners prefer to carry them in a bead-bag in order to keep them clean.

Analogues in other traditions

Some Catholic prayer forms that involve repetition of prayers, such as use of the Rosary or one of various chaplets, are similar to, but not "japa", because the aim is different. Mental methods of repeated short prayers, very similar to japa are also used in Christian traditions, most notably the practice of repeating the Jesus Prayer found in the Eastern Orthodox Church.[3][4] The practice of dhikr by Sufis and some other Muslims is also similar to japa, as is the practice of nembutsu in Pure Land Buddhism. Tibetan Buddhists include japa meditation as a large part of their religious practices.

The process of initiating the japa practitioner (called the "Sadhak") into the mantra practice is called the Mantra Upasana. A qualified guru (called Upasaka) examines the practitioners body and determines body and mind passageways(called the "Nadi") that are clogged.[citation needed] Then a program called Mantra Upasana is indoctrinated into the practitioner. As the japa progresses the Nadi's are cleared in a certain sequence leading to a healthy body and mind.[citation needed]

The stated aim, or goal of japa may vary greatly depending on the mantra involved and the religious philosophy of the practitioner. In both Buddhist and Hindu traditions mantras may be given to aspirants by their guru, after some form of initiation. The stated goal could be moksha, nirvana, bhakti, or simple personal communion with a divine power in a similar way to prayer. Many gurus and other spiritual teachers, and other religious leaders, especially Hindu and Buddhist, teach that these represent different names for the same transformed state of consciousness. However, this claim is not made about mantras that are not intended for spiritual growth and self-realization.[5]

After long use of a mantra that is intended to foster self-realization or intimacy with a divine power, an individual may reach a state of ajapajapam. In ajapajapam, the mantra "repeats itself" in the mind.[2] Similar states have been reached by adherents to other major faith traditions, using prayers from their own traditions.