Lua error in Module:Coordinates at line 668: callParserFunction: function "#coordinates" was not found. Jasna Polana (read yasna; meaning bright glade in Polish and being the name of Leo Tolstoy's home) is the former 226-acre estate of John Seward Johnson I and his third wife, Barbara Piasecka Johnson, located at 8 Province Line Road in Princeton, New Jersey. In 1998 Jasna Polana became a private country club.[1] 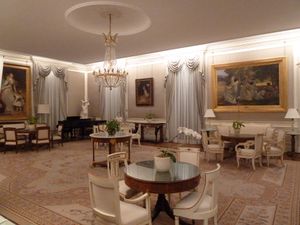 The Jasna Polana mansion was designed by Wallace K. Harrison in a neoclassicistic style. It has a U-shape with the main building and two wings. The courtyard is enclosed and can be entered through a magnificent portal. The mansion was built in the 1970s at a cost of about $30 million. [1] Mrs. Johnson was an art historian whose collections of antique furniture and paintings filled the house. After her husband's death in 1983, she spent more time in Europe and new plans for the estate needed to be developed.[1]

In 1996, plans were approved to convert the grounds into a golf course.[2] The Gary Player designed TPC Jasna Polana opened two years later, with the estate's main residence having been converted for use as the clubhouse and restaurant, and some other buildings on the estate being used as boarding facilities.

The championship golf course is a member of the Tournament Players Club network operated by the PGA Tour. Between 2000 and 2002 it hosted The Instinet Classic on the Champions Tour.[1] In 1999, it hosted an edition of Shell's Wonderful World of Golf in which Tom Watson defeated Hale Irwin.