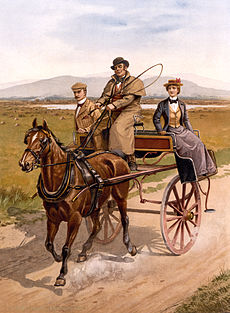 A jaunting car is a light two-wheeled carriage for a single horse, in its most common form with seats for two or four persons placed back to back, with the foot-boards projecting over the wheels. It was the typical conveyance for persons in Ireland at one time.

The first part of the word is generally taken to be identical with the verb to jaunt, now only used in the sense of to go on a short pleasure excursion, but in its earliest uses meaning to make a horse caracole or prance, hence to jolt or bump up and down. It would apparently be a variant of jaunce, of the same meaning, which is supposed to be taken from old French jancer.

It was a popular mode of transportation in 19th-century Dublin popularized by Valentine Vousden in a song by that name. Jaunting cars remain in use for tourists in some parts of the country, notably Killarney where tours of the lakes and national park are popular.

The colloquial name for the driver of a jaunting car was "jarvey", referenced in the song "The Jarvey Was a Leprechaun" by Val Doonican.

When William Wordsworth toured Scotland in 1803 with his sister Dorothy and friend Samuel Taylor Coleridge, Coleridge procured an Irish Jaunting Car for the journey from a friend in Somerset. Managing the horse and car proved difficult for Wordsworth, who had appointed himself as the driver.

There were two main varieties of jaunting car: the "outside jaunting car", or "outside car", the more common type described above, in which the passengers faced outward over the wheels, and the "inside jaunting car", or "inside car", considered to be more "genteel", in which the passengers sat with their backs to the sides of the car and faced each other. [1] Anthony Trollope described the "inside jaunting-car" as "perhaps the most uncomfortable kind of vehicle yet invented."[2] A third variety, the "covered car", was an inside car with oiled canvas arranged on all sides to protect the passengers from the weather, at the expense of visibility. [3]

This form of vehicle also featured in the 1952 movie The Quiet Man, particularly to comedic effect during the first formal courting scene involving the characters played by John Wayne, Maureen O'Hara, and Barry Fitzgerald.