From Infogalactic: the planetary knowledge core
Jump to: navigation, search
"Jawi script" redirects here. It is not to be confused with Javanese script.

Jawi is one of the two official scripts in Brunei, used as an alternative script in Malaysia and Malay dominated areas in Indonesia. Usage wise, it was the standard script for the Malay language but has since been replaced by a Latin alphabet called Rumi, and Jawi has since been relegated to a script used for religious, cultural and some administrative purposes. It can be typed with the Jawi keyboard. Day-to-day usage of Jawi is maintained in more conservative Malay-populated areas such as Kelantan in Malaysia and Pattani.[1] Jawi is still commonly used on road and building signs, and taught in primary and religious schools in Brunei and parts of Indonesia.[citation needed]

The word "Jawi" (جاوي) is an adjective for the Arabic noun Jawah (جاوة). Both terms may have originated from the term "Javadwipa", the ancient name for Java. "Jawah" and "Jawi" may have been used by the Arabs as the catch-all terms in referring to the entire Maritime Southeast Asia and its peoples,[2] similar to the kind of understanding by the later Europeans when coining the terms Malay Archipelago and Malay race.

Prior to the onset of the Islamisation, when Hindu-Buddhist influences were still firmly established in the region, the Pallava script was primarily used in writing Malay language. This is evidenced from the discovery of several stone inscriptions in Old Malay, notably the Kedukan Bukit Inscription and Talang Tuwo inscription. The spread of Islam in Southeast Asia and the subsequent introduction of Arabic writing system began with the arrival of Muslim merchants in the region since the seventh century. Among the oldest archaeological artefacts inscribed with Arabic script are; a tombstone of Syeikh Rukunuddin dated 48 AH (668/669 CE) in Barus, Sumatra; a tombstone dated 290 AH (910 CE) on the mausoleum of Syeikh Abdul Qadir Ibn Husin Syah Alam located in Alor Setar, Kedah; a tombstone found in Pekan, Pahang dated 419 AH (1026 CE); a tombstone discovered in Phan Rang, Vietnam dated 431 AH (1039 CE); a tombstone dated 440 AH (1048 CE) found in Bandar Seri Begawan, Brunei; and a tombstone of Fatimah Binti Maimun Bin Hibat Allah found in Gresik, East Java dated 475 AH (1082 CE).[2][3] Islam was spread from the coasts to the interior of the island and generally in a top-down process in which rulers were converted and then introduced more or less orthodox versions of Islam to their peoples. The conversion of King Phra Ong Mahawangsa of Kedah in 1136 and King Merah Silu of Samudra Pasai in 1267 were among the earliest examples.

At the early stage of Islamisation, the Arabic script was taught to the people who had newly embraced Islam in the form of religious practices, such as the recitation of Quran as well as salat. It is not too far-fetched to say that the Arabic script was accepted by the Malay community together with their acceptance of Islam and they only took a short time to modify the script and adapt it to suit the spoken Classical Malay – it is written from right to left and has 6 sounds not found in Arabic: ca pa ga nga va and nya. Many Arabic characters are never used as they are not pronounced in Malay language, and some letters are never joined and some joined obligatorily so.[4][5] This was the same for the acceptance of Arabic writing in Turkey, Persia and India which had taken place earlier and thus, the Jawi script was then deemed as the writing of the Muslims.[6]

The oldest remains of Malay using the Jawi script have been found on the Terengganu Inscription Stone, dated 702 H (1303 CE), nearly 600 years after the date of the first recorded existence of Arabic script in the region. The inscription on the stone contains a proclamation issued by the "Sri Paduka Tuan" of Terengganu, urging his subjects to "extend and uphold" Islam and providing 10 basic Sharia laws for their guidance. This has attested the strong observance of the Muslim faith in the early 14th century Terengganu specifically and the Malay world as a whole.[2]

The development of Jawi script was different from that of Pallava writing which was exclusively restricted to the nobility and monks in monasteries. The Jawi script was embraced by the entire Muslim community regardless of class. With the increased intensity in the appreciation of Islam, scriptures originally written in Arabic were translated in Malay and written in the Jawi script. Additionally local religious scholars later began to elucidate the Islamic teachings in the forms of original writings. Moreover, there were also individuals of the community who used Jawi for the writing of literature which previously existed and spread orally. With this inclusion of written literature, Malay literature took on a more sophisticated form. This was believed to have taken place from the 15th century and lasted right up to the 19th century.[6] Other forms of Arabic-based scripts existed in the region, notably the Pegon alphabet of Javanese language in Java and the Serang alphabet of Bugis language in South Sulawesi. Both writing systems applied extensively the Arabic diacritics and added several alphabets other than Jawi alphabets to suit the languages. Due to their fairly limited usage, the spelling system of both scripts did not undergo similar advance developments and modifications as experienced by Jawi script.[7]

The spread and extent of Jawi script 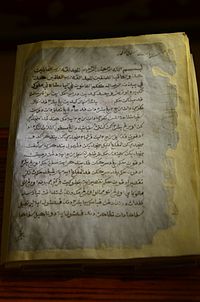 A copy of Undang-Undang Melaka ('Laws of Malacca'). The Malacca system of justice as enshrined in the text was the legal source for other major regional sultanates like Johor, Perak, Brunei, Pattani and Aceh.[8][9]

The script became prominent with the spread of Islam, as the Malays found that the earlier Pallava script was totally unsuited as a vehicle to relay religious concepts. The Malays held the script in high esteem as it is the gateway to understanding Islam and its Holy Book, the Quran. The use of jawi script was a key factor driving the emergence of Malay as the lingua franca of the region, alongside the spread of Islam.[10] It was widely used in the Sultanate of Malacca, Sultanate of Johor, Sultanate of Brunei, Sultanate of Sulu, Sultanate of Pattani, the Sultanate of Aceh to the Sultanate of Ternate in the east as early as the 15th century. The jawi script was used in royal correspondences, decrees, poems and was widely understood by the merchants in the port of Malacca as the main means of communication. Early legal digests such as the Undang-Undang Melaka Code and its derivatives including the Codes of Johor, Perak, Brunei, Kedah, Pattani and Aceh were written in this script. It is the medium of expression of kings, nobility and the religious scholars. It is the traditional symbol of Malay culture and civilisation. Jawi was used not only amongst the ruling class, but also the common people. The Islamisation and Malayisation of the region popularised jawi into a dominant script.[11]

Royal correspondences for example are written, embellished and ceremoniously delivered. Examples of royal correspondences still in the good condition are the letter between Sultan Hayat of Ternate and King John III of Portugal (1521) ; the letter from Sultan Iskandar Muda of Aceh to King James I of England (1615); the letter from Sultan Abdul Jalil IV of Johor to King Louis XV of France (1719).[11] Many literary works such as epics, poetry and prose use the Jawi script. It is the pinnacle of the classic Malay civilisation. Historical epics such as the Malay Annals, as listed by UNESCO under Memories of the World, are among the countless epics written by the Malay people. The Sufic poems by Hamzah Fansuri and many others contributed to the richness and depth of the Malay civilisation. Jawi script was the official script for Unfederated Malay States during British protectorate.

Today, Jawi is an official script of Brunei.[10] It is used for religious and Malay cultural administration in Terengganu, Kelantan, Kedah, Perlis and Johor.[citation needed] Various efforts were in place to revive the Jawi script in Malaysia and Brunei due to its role in the Malay and Islamic spheres. Jawi scripts are also seen at the rear of Malaysian ringgit and Brunei dollar banknotes. The Malays in Patani still use Jawi today for the same reasons.[citation needed]

Indonesia, having multiple regional/native languages, uses the Indonesian language in general. Nonetheless, the Jawi script does have a regional status in natively Malay areas in Indonesia such as Riau, Riau archipelago, Aceh, or Kalimantan (example the Banjar language).[12][13] This is partially due to the fact that regional/native languages are compulsory studies in the basic education curriculum of each region (examples include Javanese for Javanese region, Sundanese for Sundanese region, Madurese for Maduranese region, and jawi for Malay region).[12] Today Jawi script is widely used in Riau and Riau Island province, where road signs and government buildings signs are written in this script. It is still widely used in traditional religious school across Java, however, in the form of Pegon script, a variant of it, and is not used in common writing when the Latin alphabet and in some cases the Javanese script.

Modern Jawi Spelling is based on the Daftar Kata Bahasa Melayu (DKBM): Rumi-Sebutan-Jawi dictionary. Older texts may use different spellings for some words.[15] Nonetheless, even different modern sources[16] may use different spelling conventions; they may differ especially in the usage of the mater lectionis (alif "ا", wau "و" and ya "ي") and the 3/4 hamzah "ء", as well as in the spelling of vowels and consonant clusters in loanwords from English[citation needed]. One source[17] tends to use the following conventions;[18] there are numerous exceptions to them nonetheless.

When representing /a/, alif "ﺍ" is mostly omitted in CVC-syllables.

However, it is usually not omitted in monosyllabic words that start with wau "و", e.g. wau "واو", wap "واڤ", wang "واڠ".

Some native Malay trisyllabic root morphemes ending with /a/ [ə], with three open syllables and which include the abovementioned 12 consonants, may also omit the final alif "ﺍ".

Akin to the Arabic script, Jawi is constructed from right-to-left. Below is an exemplification of the Jawi script extracted from the first and second verse of the notable Ghazal untuk Rabiah; غزال اونتوق ربيعة (English: A Ghazal for Rabiah).[19]