Jaya Sri Maha Bodhi (Sinhala:ජය ශ්‍රි මහා බොධිය) is a Sacred Fig tree in the Mahamewna Gardens, Anuradhapura, Sri Lanka. It is said to be the right-wing branch (southern branch) from the historical Jaya Sri Maha Bodhi at BuddhaGaya in India under which Lord Buddha attained Enlightenment. It was planted in 249 BC,[1][2][3][4] and is the oldest living human-planted tree in the world with a known planting date.[5] Today it is one of the most sacred relics of the Buddhists in Sri Lanka and respected by Buddhists all over the world.

The other fig trees that surround the sacred tree protect it from storms and animals such as monkeys, bats, etc.

In April 2014, the government banned all construction within 500 meters of the tree. Only construction that obviously will not harm the tree will be allowed.[6] 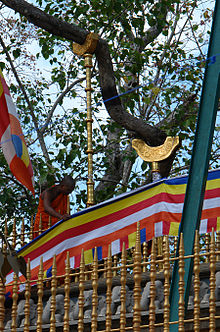 In the 3rd century BC, it was brought to Sri Lanka by Sangamitta (Pali; Skt.: Sanghamitra) Thera, the daughter of Emperor Asoka and founder of an order of Buddhist nuns in Sri Lanka. In 288 BC [7][8][9][10] it was planted by King Devanampiya Tissa on a high terrace about 6.5 m (21.3 ft) above the ground in the Mahamevnāwa Park in Anuradhapura and surrounded by railings.

The present wall was constructed by Ilupandeniye Athtadassi Thero during the reign of King Kirti Sri Rajasinha, to protect it from wild elephants which might have damaged the tree. The height of the wall is 10 ft (3.0 m); and 5 ft (1.5 m) in thickness; its length from north to south is 388 ft (118.3 m) and from east to west 274 ft (83.5 m).

Two statues of Lord Buddha can be seen in the image-house; a stone-standing-statue is in the right side of the stone wall. The cobra-stone is a very rare creation, showing the embossed figure of cobra. Several monolith heads with plain incisions are in this religious site.

Ruins of an ancient building called Mayura Pirivena (Mayura Monastery) have been found to the south-west of the Jaya Sri Maha Bodhi, and the ruins of a stupa called Dakkhina Tupa (Southern Monastery) can be seen nearby.

According to the ancient chronicles in Sri Lanka, some walls and terraces had been built surrounding the sacred tree at some time in the past. Mahavamsa states that King Gothabhaya (249 – 262 AD) built a rubble wall. Dipavamsa reports that a rock-laid terrace and a lattice wall was built by King Kirthi Sri Meghavarna (302 - 330 AD).

During excavation for reconstructing the present wall, the rubble wall with its foundation created by King Gotabhya, and the rock-laid terrace together with a lattice wall constructed by King Kirthi Sri Meghavarna were found. These were preserved at place, and were opened to public in January 2010.

Two branches of the sacred tree were broken during separate storms in 1907 and 1911. An individual cut down a branch in 1929.[citation needed] Tamil Tiger separatists shot and massacred a number of Sinhales-Buddhists on the upper terrace in 1985. This incident is known as the Anuradhapura massacre.[11]