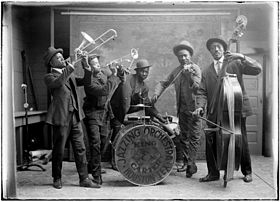 The Jazz Age was a period in the 1920s, ending with the Great Depression, in which jazz music and dance styles became popular, mainly in the United States, but also in Britain, France and elsewhere. Jazz originated in New Orleans as a fusion of African and European music and played a significant part in wider cultural changes in this period, and its influence on pop culture continued long afterwards. The Jazz Age is often referred to in conjunction with the Roaring Twenties.

The birth of jazz music is credited to African Americans,[1] but expanded and over time was modified to become socially acceptable to middle-class white Americans. Those people who opposed Jazz saw it as music of people with no training or skill. [2] White performers were used as a vehicle for the popularization of jazz music in America. Even though the jazz movement was taken over by the middle class white population, it facilitated the mesh of African American traditions and ideals with the white middle class society.[3] Cities like New York and Chicago were cultural centers for jazz, and especially for African American artists. People who were not familiar with Jazz music could not recognize it by the way Africans Americans wrote it. Furthermore, the way African Americans writers wrote about Jazz music, made it seem as though it was not a cultural achievement of the race.[2]

From 1920 to 1933 Prohibition in the United States banned the sale of alcoholic drinks, resulting in illicit speakeasies which became lively venues of the "Jazz Age", hosting popular music including current dance songs, novelty songs and show tunes.

Jazz began to get a reputation as being immoral, and many members of the older generations saw it as threatening the old cultural values and promoting the new decadent values of the Roaring 20s. Professor Henry van Dyke of Princeton University wrote: "... it is not music at all. It's merely an irritation of the nerves of hearing, a sensual teasing of the strings of physical passion."[4] The media too began to denigrate jazz. The New York Times used stories and headlines to pick at jazz: Siberian villagers were said by the paper to have used jazz to scare off bears, when in fact they had used pots and pans; another story claimed that the fatal heart attack of a celebrated conductor was caused by jazz.[4]

From 1919, Kid Ory's Original Creole Jazz Band of musicians from New Orleans played in San Francisco and Los Angeles, where in 1922 they became the first black jazz band of New Orleans origin to make recordings.[5][6] That year also saw the first recording by Bessie Smith, the most famous of the 1920s blues singers.[7] Chicago meanwhile was the main center developing the new "Hot Jazz", where King Oliver joined Bill Johnson. Bix Beiderbecke formed The Wolverines in 1924.

In 1924, Louis Armstrong joined the Fletcher Henderson dance band for a year, as featured soloist. The original New Orleans style was polyphonic, with theme variation and simultaneous collective improvisation. Armstrong was a master of his hometown style, but by the time he joined Henderson's band, he was already a trailblazer in a new phase of jazz, with its emphasis on arrangements and soloists. Armstrong's solos went well beyond the theme-improvisation concept, and extemporized on chords, rather than melodies. According to Schuller, by comparison, the solos by Armstrong's bandmates (including a young Coleman Hawkins), sounded "stiff, stodgy," with "jerky rhythms and a grey undistinguished tone quality."[8] The following example shows a short excerpt of the straight melody of "Mandy, Make Up Your Mind" by George W. Meyer and Arthur Johnston (top), compared with Armstrong's solo improvisations (below) (recorded 1924).[9] (The example approximates Armstrong's solo, as it doesn't convey his use of swing.)

Jelly Roll Morton recorded with the New Orleans Rhythm Kings in an early mixed-race collaboration, then in 1926 formed his Red Hot Peppers. There was a larger market for jazzy dance music played by white orchestras, such as Jean Goldkette's orchestra and Paul Whiteman's orchestra. In 1924 Whiteman commissioned Gershwin's Rhapsody in Blue, which was premiered by Whiteman's Orchestra. By the mid-1920s, Whiteman was the most popular bandleader in the U.S. His success was based on a "rhetoric of domestication" according to which he had elevated and rendered valuable a previously inchoate kind of music.[11] Other influential large ensembles included Fletcher Henderson's band, Duke Ellington's band (which opened an influential residency at the Cotton Club in 1927) in New York, and Earl Hines' Band in Chicago (who opened in The Grand Terrace Cafe there in 1928). All significantly influenced the development of big band-style swing jazz.[12] By 1930, the New Orleans-style ensemble was a relic, and jazz belonged to the world.[13]

Some famous black artists of the time were Ella Fitzgerald, Louis Armstrong, Duke Ellington, and Count Basie.[14] Several musicians grew up in musical families, where a family member would often teach how to read and play music. Some musicians, like Pops Foster, learned on homemade instruments.[15] Urban radio stations played African American jazz more frequently than suburban stations, due to the concentration of African Americans in urban areas such as New York and Chicago. Younger demographics popularized the black-originated dances such as the Charleston as part of the immense cultural shift the popularity of jazz music generated.[16]The migration of African Americans from the American south introduced the culture born out of a repressive, unfair society to the American north where navigating through a society with little ability to change played a vital role in the birth of jazz.[17]

The spread of jazz was encouraged by the introduction of large-scale radio broadcasts in 1932. The radio was described as the "sound factory." Radio made it possible for Americans to experience different styles of music without physically visiting a jazz club. The radio provided Americans with a trendy new avenue for exploring the world through broadcasts and concerts from the comfort of their living room.[18] These were broadcast from cities such as New York, Chicago, Kansas City, and Los Angeles. There were two categories of live music on the radio: concert music and big band dance music. The concert music was known as "potter palm" and was concert music by amateurs, usually volunteers. This type of radio was a way of making broadcasting cheaper. This type of radio's popularity started to decrease as commercial radio increased.

The next type of music is known as big band dance music. This type is played by professionals and was featured from nightclubs, dance halls, and ballrooms.[19] Musicologist Charles Hamm described three types of jazz music at the time: black music for black audiences, black music for white audiences, and white music for white audiences.[20] Jazz artists like Louis Armstrong originally received very little airtime because most stations preferred to play the music of white American jazz singers. Other jazz vocalists include Bessie Smith and Florence Mills. In urban areas, such as Chicago and New York, African American jazz was played on the radio more often than in the suburbs. Big-band jazz, like that of James Reese Europe and Fletcher Henderson in New York, attracted large radio audiences.[19]

1920s youth used the influence of jazz to rebel against the traditional culture of previous generations. This youth rebellion of the 1920s went hand-in-hand with fads like bold fashion statements (flappers), women smoking cigarettes, free talk about sex, and new radio concerts. Dances like the Charleston, developed by African Americans, suddenly became popular among the youth. Traditionalists were aghast at what they considered the breakdown of morality.[21] Some urban middle class African Americans perceived jazz as "devil's music", and believed the improvised rhythms and sounds were promoting promiscuity. [22]

File:Lovie Austin.jpg
Lovie Austin (1887–1972) was an American Chicago-based bandleader, session musician (piano), composer, singer, and arranger during the 1920s classic blues era. She and Lil Hardin Armstrong are often ranked as two of the best female jazz blues piano players of the period.[23]

Women played an important role throughout jazz's history. With women’s suffrage–the right for women to vote–at its peak with the ratification of the Nineteenth Amendment on August 18, 1920, and the entrance of the free-spirited flapper, women began to take on a larger role in society and culture. With women now taking part in the work force after the end of the First World War there were many more possibilities for women in terms of social life and entertainment. Ideas like equality and free sexuality were very popular during the time and women seemed to capitalize during this period. The 1920s saw the emergence of many famous women musicians including Bessie Smith. Bessie Smith also gained attention because she was not only a great singer but also an African American woman. She has grown through the ages to be one of the most well respected singers of all time. Singers such as Billie Holiday and Janis Joplin were inspired by Bessie Smith.[24]

Another exception to the common stereotype of women at this time was piano player Lil Hardin Armstrong. She was originally a member of King Oliver's band with Louis, and went on to play piano in her husband's band the Hot Five and then his next group called the Hot Seven [25] It was not until the 1930s and 1940s that many women jazz singers, such as Bessie Smith and Billie Holiday were recognized as successful artists in the music world.[25] These women were persistent in striving to make their names known in the music industry and lead the way for many more women artists to come.[26]

Jazz music originated in New Orleans in the "sub-style" of Dixieland Jazz. [27] The music that began in New Orleans was largely created from African folk music with some European roots in it. New Orleans provided great opportunity for such an occurrence because it was a port city, many cultures intertwined there. [28] While in New Orleans, jazz gained influence from creole, ragtime, and most importantly blues music. [29] Two important aspects of jazz are swing and improvisation. The famous jazz trumpeter Louis Armstrong's most influential impact upon jazz was bringing an improvisational soloist to the forefront of a piece. [29]

As jazz flourished, American elites who preferred classical music sought to expand the listenership of their favored genre, hoping that jazz wouldn't become mainstream.[30] Controversially, jazz became an influence on composers as diverse as George Gershwin and Herbert Howells.