Jean-Marie Lehn (born September 30, 1939) is a French chemist. He received the Nobel Prize in Chemistry together with Donald Cram and Charles Pedersen in 1987 for his synthesis of cryptands. Lehn was an early innovator in the field of supramolecular chemistry, i.e., the chemistry of host-guest molecular assemblies created by intermolecular interactions, and continues to innovate in this field. His group has published in excess of 900 peer-reviewed articles in chemistry literature. 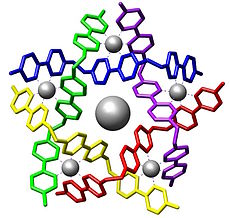 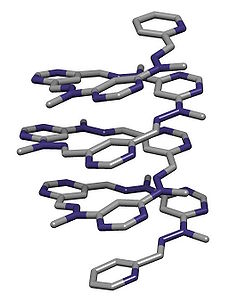 Lehn was born in Rosheim, France to Pierre and Marie Lehn. His father was a baker, but because of his interest for music, he later became the city organist. Lehn also studied music, saying that it became his major interest after science. He has continued to play the organ throughout his professional career as a scientist. His high school studies in Obernai, from 1950 to 1957, included Latin, Greek, German, and English languages, French literature, and he later became very keen of both philosophy and science, particularly chemistry. In July 1957, he obtained the baccalauréat in philosophy, and in September of the same year, the baccalauréat in Natural Sciences.

At the University of Strasbourg, although he considered studying philosophy, he ended up taking courses in physical, chemical and natural sciences, attending the lectures of Guy Ourisson, and realizing that he wanted to pursue a research career in organic chemistry. He joined Ourisson's lab, working his way to the Ph.D. There, he was in charge of the lab's first NMR spectrometer, and published his first scientific paper, which pointed out an additivity rule for substituent induced shifts of proton NMR signals in steroid derivatives. He obtained his Ph.D., and went to work for a year at Robert Burns Woodward's laboratory at Harvard University, working among other things on the synthesis of vitamin B12.

In 1966, he was appointed a position as maître de conférences (assistant professor) at the Chemistry Department of the University of Strasbourg. His research focused on the physical properties of molecules, synthesizing compounds specifically designed for exhibiting a given property, in order to better understand how that property was related to structure.

In 1968, he achieved the synthesis of cage-like molecules, comprising a cavity inside which another molecule could be lodged. Organic chemistry enabled him to engineer cages with the desired shape, thus only allowing a certain type of molecule to lodge itself in the cage. This was the premise for an entire new field in chemistry, sensors. Such mechanisms also play a great role in molecular biology.

These cryptands, as Lehn dubbed them, became his main center of interest, and led to his definition of a new type of chemistry, "supramolecular chemistry", which instead of studying the bonds inside one molecule, looks at intermolecular attractions, and what would be later called "fragile objects", such as micelles, polymers, or clays.

In 1980, he was elected to become a teacher at the prestigious Collège de France, and in 1987 was awarded the Nobel Prize, alongside Donald Cram and Charles Pedersen for his works on cryptands.

He is currently a member of the Reliance Innovation Council which was formed by Reliance Industries Limited, India.[2]

Lehn was married in 1965 to Sylvie Lederer, and together they had two sons, David and Mathias.

Lehn has won numerous awards and honors including