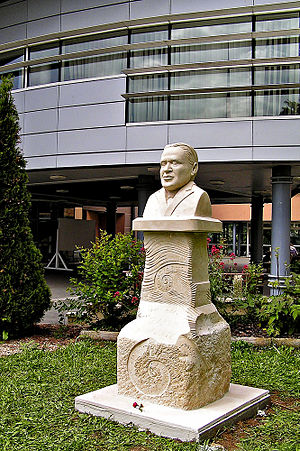 Jean Hyppolite (January 8, 1907 – October 26, 1968)[1] was a French philosopher known for championing the work of Hegel, and other German philosophers, and educating some of France's most prominent post-war thinkers.

Hyppolite was born in Jonzac, France. He was a graduate of the École Normale Supérieure at roughly the same time as Jean-Paul Sartre. After graduation he embarked on a serious study of Hegel, teaching himself German in order to read Phenomenology of Spirit in the original. In 1939 he came out with his own translation and his commentary would later form the basis of the book Genesis and Structure of the Phenomenology of Spirit (published in 1947). After the Second World War, Hyppolite became a professor at the University of Strasbourg, before moving to the Sorbonne in 1949.[2]

In 1952, Hyppolite published Logique et existence, a work that may have had a seminal effect on what was to become known as Post-modernism. This book tries to correlate Hegel's Phenomenology to his Logics (longer and shorter). In doing so, it raises the questions of language, being, and difference that were to become the hallmarks of new French philosophy at the end of the 20th century. One excellent hint at the importance and centrality of this book is found in Gilles Deleuze's review of it. The translators of the English language edition of the text (SUNY Press, 1997) were thoughtful enough to bundle Deleuze's review at the rear of the volume.

In 1954, he became the director of the École Normale Supérieure and in 1955 produced a study of Karl Marx's earlier, more Hegelian period, at a time when the French interest in Hegel was at its apogee.[2] In 1963 he was elected to the Collège de France and given a chair in The History of Philosophical Thought.

While philosophers such as Jean-Paul Sartre were known for producing new works influenced by German philosophy, Hyppolite is remembered as an expositor, teacher, and translator. He influenced a number of thinkers, including Michel Foucault and Gilles Deleuze (who studied Hegel under him at Lycée Henri IV), as well as Jacques Derrida, Gérard Granel and Étienne Balibar (at the École Normale).[2]

Studies on Marx and Hegel is one of his major books.