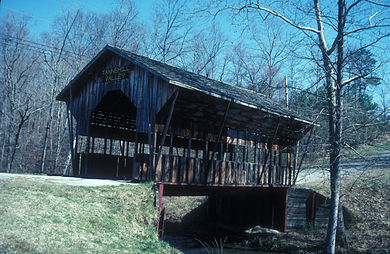 Jefferson County was established on December 13, 1819, by the Alabama Legislature.[1] It was named in honor of Thomas Jefferson.[1] The county is located in the north-central portion of the state, on the southmost edge of the Appalachian Mountains, in the center of the (former) iron, coal, and limestone mining belt of the Southern United States. Jefferson County is bordered by Blount County, Bibb County, St. Clair County, Shelby County, Tuscaloosa County, and Walker County, in Alabama. Jefferson County has a land area of about 1,119 square miles (2,900 km2). Well before Birmingham was even founded in 1871, the county seat of Jefferson County was located at Carrollsville (1819 – 21) and Elyton (1821 – 73), and since 1873 it has been located in Birmingham, which was named for the English city of the same name in Warwickshire. That city had long been a center of iron and steel production in Great Britain. Note that Elyton has long been a part of Birmingham itself, since Birmingham was established by the merger of three towns, and the city has a long history of annexing its neighboring towns and villages, including North Birmingham.

Two extremely controversial undertakings by county officials in the 2000s left the county in extreme debt, eventually leading to a 2011 bankruptcy. In the 1990s, the county authorized and financed a massive overhaul of the county-owned sewer system, beginning in 1996. Sewerage and water rates had increased more than 300% in the 15 years before 2011, causing severe problems for the poor in Birmingham and the county.

Costs for the project increased due to problems in the financial area and to a series of risky bond-swap agreements made by county officials, encouraged by bribes by financial services companies. Both the project and its financing were scrutinized by federal prosecutors. By 2011, "six of Jefferson County's former commissioners had been found guilty of corruption for accepting the bribes, along with 15 other officials."[3][4]

A series of controversial interest rate swaps, initiated in 2002 and 2003 by former Commission President Larry Langford (removed as the mayor of Birmingham after his conviction[5]), were intended to lower interest payments. But they had the opposite effect, increasing the county's indebtedness to the point that it had to declare bankruptcy. The bond swaps were the focus of an investigation by the United States Securities and Exchange Commission.[6]

In late February 2008 Standard & Poor's lowered the rating of Jefferson County bonds to "junk" status. The likelihood of the county filing for Chapter 9 bankruptcy protection was debated in the press.[7] In early March 2008, Moody's followed suit and indicated that it would also review the county's ability to meet other bond obligations.[8]

In February 2011, Lesley Curwen of the BBC World Service interviewed David Carrington, the newly appointed president of the County Commission, about the risk of defaulting on bonds issued to finance “what could be the most expensive sewage system in history.” Carrington said there was “no doubt that people from Wall Street offered bribes” and “have to take a huge responsibility for what happened.” Wall Street investment banks, including JP Morgan and others arranged complex financial deals using swaps. The fees and penalty charges increased the cost so the county in 2011 had $3.2 billion outstanding. Carrington said one of the problems was that elected officials had welcomed scheduling with very low early payments so long as peak payments occurred after they left office.

The SEC awarded the county $75 million in compensation relation to “unlawful payments” against JP Morgan; in addition the company was penalized by having to forfeit $647 million of future fees.[10]

Jefferson County filed for bankruptcy on November 9, 2011. This action was valued at $4.2 billion, with debts of $3.14 billion relating to sewer work; it was then the most expensive municipal bankruptcy ever in the U.S. In 2013 it was surpassed by the Detroit bankruptcy.[4] The County requested Chapter 9 relief under federal statute 11 U.S.C. §921. The case was filed in the Northern District of Alabama Bankruptcy Court as case number 11-05736.

As of May 2012[update], Jefferson County had slashed expenses and reduced employment of county government workers by more than 700.[11]

In 2007 Jefferson County had the highest rate of syphilis cases per 100,000 in the US, according to data from the Centers for Disease Control and Prevention.[23]

Jefferson County is one of the eight counties in Alabama with a limited-form of home rule government. A 1973 Commission had recommended that all counties be granted home rule under the state constitution, but the state legislature refused to give up its control over local affairs.

Changes to county representation in the state legislature followed the state's incorporating the principle of one man, one vote from the US Supreme Court decision of Baker v. Carr (1964), which ruled that bicameral legislatures had to have both houses based on population districts, rather than geographic ones. The complexity of Birmingham and Jefferson County urban conditions required more local direction and the county gained some home rule functions by 1944. It allows the county to be able to set up a zoning system for land use, maintain the sanitary sewer, sewerage systems and highways, provide for garbage and trash disposal, and to enforce taxation (except for property taxes).

The county is governed by a five-member commission that combines the legislative and executive duties for the county. The Commissioners are elected from single-member districts, rather than by an "at-large" election. Each county commissioner represents one of the five districts in the county. By votes in the commission, the commissioners are given executive responsibilities for the various county departments, which fall under the categories of "Roads and Transportation", "Community Development", "Environmental Services", "Health and Human Services", "Technology and Land Development", and "Finance and General Services". The County Commission elects its own President, who is the chairman of all County Commission meetings, and who has additional executive duties.

Sales tax on many items within the county can be as high as 12%. The County Commission approved an educational sales tax by a 3–2 vote in October 2004. This was implemented In January 2005, as a 1% sales tax to support funding for construction of needed education facilities. This additional 1% has resulted in some county municipalities, such as Fairfield, to have sales tax rates as high as 10%, while other municipalities and incorporated communities had an increase in their total sales tax rate from 8% to 9%. The state of Alabama sales tax was 4% at the time and Jefferson County's was 2% in total.[when?] Municipal sales taxes go as high as 4%.[citation needed]

The Commission hires a county manager, who oversees and directs daily operations of county departments.

Jefferson County is served by the Jefferson County Sheriff's Department. The County Sheriff is chosen by the eligible voters in an "at large" election. The Sheriff's Department fields about 175 deputy sheriffs who patrol the unincorporated areas of the county, and also all municipalities that do not have their own police departments. The Sheriff's Department has two county jails, one in Birmingham and one in Bessemer, which are used to detain suspects awaiting trial (who cannot afford to post bail) and convicted criminals serving sentences less than one year in length.

Two judicial courthouses are located in Jefferson County, a situation dating to when the state legislature was preparing to split off a portion of Jefferson County to create a new county, centered around Bessemer. The split did not take place because the proposed new county could not have sufficient area: a minimum of 500 square miles, to meet the requirement of the Alabama State Constitution. The additional county courthouse and some parallel functions remain in service. The main courthouse is in Birmingham and the second one is located in Bessemer. Certain elected county officials maintain offices in the Bessemer annex, such as the Assistant Tax Collector, the Assistant Tax Assessor, and the Assistant District Attorney.

The Alabama Department of Corrections operates the William E. Donaldson Correctional Facility, a prison for men, in unincorporated Jefferson County near Bessemer. The prison includes one of the two Alabama death rows for men.[26]

Except for cities such as Birmingham that have established their own local school districts, all parts of Jefferson County are served by Jefferson County Board of Education. Parts within Birmingham are served by Birmingham City Schools. Other cities in the county that have established their own school systems are Gardendale, Bessemer, Fairfield, Midfield, Trussville, Homewood, Leeds, Hoover, Vestavia Hills, Tarrant, and Mountain Brook.

Birmingham is the location of the Birmingham-Shuttlesworth International Airport, which provides service, either direct or connecting, to most of the rest of the United States.