Jefferson County was created in 1827. It was named for Thomas Jefferson, third President of the United States of America, who had died the year before the county's establishment.[3] 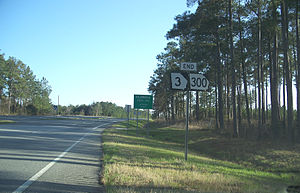 Entering Jefferson County on US 19 from Thomas County, Georgia

Jefferson County is one of only a handful of counties in the Florida Panhandle that politically favors the Democratic Party. 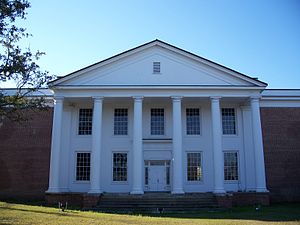 The Jefferson County School District is the only one in Florida operating under a declared financial emergency due to budget deficits.[12] On April 23, 2009, the Florida Department of Education took over financial oversight of the district. [13] In June 2011, the District exited financial emergency one (1) year sooner than expected due to hard work and sacrifice of the part of District faculty and staff. The District has now operated for two years with a fund balance well over the mandated 3%. The District is proud to be financially sound. Academically, the District is showing huge gains in reading and writing. In 2013 there is a new sense of excitement on the part of students, faculty and the community as all are working hard to provide a high quality education delivered with fidelity in a safe, secure environment. Career Academies have been introduced on the campus of Jefferson County Middle High School offering students options in career areas connected to the local economy. The Jefferson County Tigers won the State Championship in Football in 2012.

The sole existing railroad line is a CSX line once owned by the Seaboard Air Line Railroad that was used by Amtrak's Sunset Limited until 2005, when the service was truncated to New Orleans by Hurricane Katrina. No Amtrak trains stopped anywhere in Jefferson County. 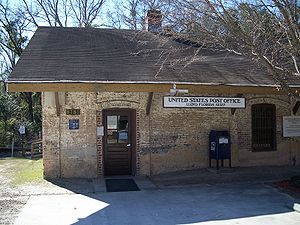