Jeremiah S. Black was born on January 10, 1810, in Stony Creek, Pennsylvania, near Glades, Pennsylvania. He was the son of Representative Henry Black, and his wife Mary (Sullivan) Black. He was largely self-educated and was admitted to the Pennsylvania bar before he was of age. He gradually became one of the leading American lawyers, and was a member of the Supreme Court of Pennsylvania (1851–57), serving as Chief Justice (1851–54).[1]

In 1857, he entered the Cabinet of President James Buchanan as Attorney General. In this capacity, he successfully contested the validity of the California land claims to about 19,000 square miles (49,000 km2) of land, fraudulently alleged to have been granted to land-grabbers and others by the Mexican government prior to the close of the Mexican–American War.[1]

When Secretary of State Lewis Cass resigned in December 1860, Black was appointed to replace him, serving from December 17, 1860, to the end of Buchanan's term on March 4, 1861.[1] Black successfully urged the appointment of Edwin M. Stanton as his successor as Attorney General.

Black was perhaps the most influential of President Buchanan's official advisers too, during the secession crisis. He denied the constitutionality of secession, and urged that Fort Sumter be properly reinforced and defended.[1] However, he also argued that a state could not be legally coerced by the Federal government. 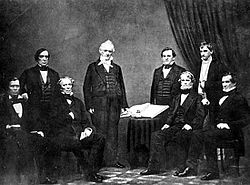 In February 1861, President Buchanan nominated him for a seat on the Supreme Court; but his nomination was defeated in the Senate by a single vote on February 21. He became Reporter of Decisions of the Supreme Court of the United States in 1861; but, after publishing the reports for the years 1861 and 1862, he resigned and devoted himself almost exclusively to his private law practice.[1] 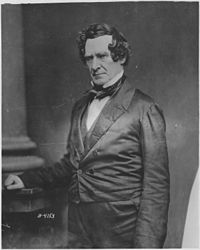 After the Civil War, he vigorously opposed the Congressional Plan for Reconstruction and drafted President Johnson's message vetoing the Reconstruction Act passed on March 2, 1867;[1] his veto was overridden. Black was also briefly Counsel for President Johnson in his trial on his Article of Impeachment before the United States Senate, and for William W. Belknap, United States Secretary of War from 1869 to 1876, who in 1876 was impeached on a charge of corruption; he also represented Samuel J. Tilden during the contest for the presidency between Tilden and Rutherford B. Hayes.[1] He died there at the Brockie in York, Pennsylvania, on August 19, 1883, at the age of 73, and was buried in Prospect Hill Cemetery. 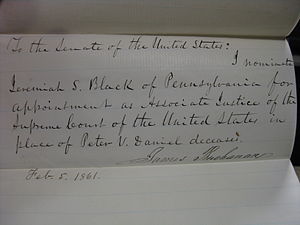