The Jerusalem Post is a broadsheet newspaper based in Israel, publishing only English and French editions. It was founded in 1932 by Gershon Agron as The Palestine Post and changed its name in 1950 to The Jerusalem Post. In 2004, the paper was bought by Mirkaei Tikshoret, a diversified Israeli media firm controlled by investor Eli Azur. In April 2014, Eli Azur acquired the newspaper Maariv.[4]

Formerly regarded as left-wing, the paper underwent a noticeable shift to the right in the late 1980s.[5] From 2004, under then editor-in-chief David Horovitz, the paper took a more centrist position, competing against the staunch left-liberal Ha'aretz. Its current editor Steve Linde aims to provide balanced coverage of the news along with views from across the political spectrum, focusing on Israel, the Middle East, the Jewish world and interfaith relations.[citation needed]

An antecedent paper,The Palestine Bulletin was founded in January 1925 by Jacob Landau of the Jewish Telegraphic Agency.[6] It was owned by the Palestine Telegraphic Agency, which was in practice part of the JTA even though it was legally separate.[6] On 1 November 1931, editorship of the Bulletin was taken over by American journalist Gershon Agronsky (later Agron).[7] In March 1932, a dispute arose between Landau and Agronsky, which Agronsky resolved to settle by establishing an independent newspaper.[6] However, Landau and Agronsky instead came to an agreement to transform the Bulletin into a new jointly owned newspaper.[6] Accordingly, the Palestine Bulletin published its last issue on 30 November 1932 and the The Palestine Post Incorporating The Palestine Bulletin appeared the following day, 1 December 1932.[6] On 25 April 1933, the masthead was reduced to just The Palestine Post, though the newspaper continued to state its founding year as 1925 for at least a year afterwards.[8] 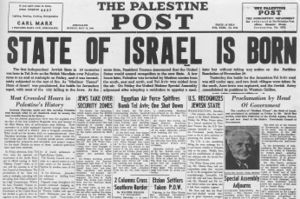 During its time as The Palestine Post, the publication supported the struggle for a Jewish homeland in Palestine and openly opposed British policy restricting Jewish immigration during the Mandate period. According to one commentator, "Zionist institutions considered the newspaper one of the most effective means of exerting influence on the British authorities".[9]

On the evening of 1 February 1948, a stolen British police car loaded with half a ton of TNT pulled up in front of the Jerusalem office of the Palestine Post; the driver of a second car arrived a few minutes later, lit the fuse and drove off.[10] The building also contained other newspaper offices, the British press censor, the Jewish settlement police, and a Haganah post with a cache of weapons. Arab leader Abd al-Qadir al-Husayni claimed responsibility for the bombing, but historian Uri Milstein reported that the bomb had been prepared by the Nazi-trained Fawzi el-Kutub, known as "the engineer", and that two British army deserters were also involved, Cpl. Peter Mersden and Capt. Eddie Brown.[11][12] Three persons died in the bombing, a newspaper typesetter and two people who lived in a nearby block of flats.[13] Dozens of others were injured and the printing press was destroyed. The morning paper came out in a reduced format of two pages, printed up at a small print shop nearby.[10]

In 1950, two years after the State of Israel was declared, the paper was renamed The Jerusalem Post.

The broadsheet newspaper is published from Sunday to Friday, with no edition appearing on Saturday (the Jewish Sabbath) and Jewish religious holidays. Regular opinion columnists write on subjects such as religion, foreign affairs and economics. As of 2011[update] the managing editor is David Brinn.[citation needed] Some of the material is translated and included in the free Hebrew daily Israel Post, of which Eli Azur is a co-owner.

The Jerusalem Post also publishes a monthly magazine titled IVRIT edited by Dr. Sarit Yalov. Its target audience is people learning Hebrew language and it is described as "an easy-Hebrew" publication, meant for improving basic Hebrew reading skills. It uses the vowel notation system to make comprehension of the Hebrew alphabet abjad simpler.[15] The Jerusalem Report edited by Ilan Evyatar, is a fortnightly print and online glossy newsmagazine.

Until 1989, the paper supported the forerunners of the Labor Party. In 1989, the paper was purchased by Hollinger Inc. A number of journalists resigned from the Post after Conrad Black's takeover and founded The Jerusalem Report, a weekly magazine eventually sold to the Post. The leader of the walkout was David Landau, who founded the Ha'aretz English Edition and went on to become editor-in-chief of Ha'aretz until 2009.

Under Editor-in-Chief David Macovsky, from 1999 to 2000, the paper took a centrist position.[1] In 2002, Hollinger hired the politically conservative Bret Stephens of The Wall Street Journal as editor-in-chief. David Horovitz, who holds a center-left worldview, took over as editor-in-chief on 1 October 2004.[16] He was expected to have the paper eschew any clear political line, and the paper turned centrist again.[1][16] On 16 November 2004, Hollinger sold the paper to Mirkaei Tikshoret Limited, a Tel Aviv-based publisher of Israeli newspapers. CanWest Global Communications, Canada's biggest media concern, had announced an agreement to take a 50 percent stake in the Jerusalem Post after Mirkaei bought the property, but the deal soured. The two sides went to arbitration, and CanWest lost.[17] In 2011, Horovitz was succeeded by the paper's former managing editor, Steve Linde, who aims for the paper to be politically moderate and balanced.[18][19]

The Jerusalem Post group also publishes an online edition found at, and colloquially referred to as, JPost.com. The site primarily covers news from Israel, the Jewish World and the Middle East. Nati Gabbay took over as managing editor of JPost.com, in December 2013.

JPost.com was launched in December 1996. Its current version also contains a French language edition (fr.jpost.com), blogs, an ePaper version of the daily newspaper, a range of magazines and other web versions of the Group's products.

According to Alexa Internet traffic rankings, JPost.com is among the top 3,000 websites in the United States.[20] The site is an entity separate from the daily newspaper. While sharing reporters, it is managed by different teams. Its staff is based in Tel Aviv, while the newspaper offices are located in Jerusalem.[21]

The site contains archives that go back to 1989, and the default search on the site sends users to archive listings, powered by ProQuest, where articles can be purchased.[22] Free blurbs of the article are available as well, and full articles are available when linked to directly from navigation within JPost.com or from a search engine.

JPost.com includes the "Premium Zone," a pay-wall protected area, containing additional Jerusalem Post articles and special features. The site, which was given a graphic facelift in September 2014, recently relaunched its mobile and tablet applications, as well as its special edition for mobile viewing.

In May 2013, JPost.com launched an online daily newscast, which goes out every weekday. The edition is anchored by Canadian-Israeli journalist Lauren Izso who previously attended Ryerson University's School of Journalism and is frequently featured in Anglo Israeli media. Each newscast is aired around 5 p.m. Israel time (GMT+2).[23][24][25]