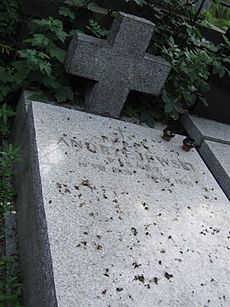 Grave of Jerzy Andrzejewski at Powązki Cemetery in Warsaw

Jerzy Andrzejewski (Polish pronunciation: [ˈjɛʐɨ andʐɛˈjɛfskʲi]; 19 August 1909 – 19 April 1983) was a prolific Polish author. His novels, Ashes and Diamonds (about the immediate post-war situation in Poland), and Holy Week (dealing with the Warsaw Ghetto Uprising), have been made into film adaptations by the Oscar-winning Polish director Andrzej Wajda. Holy Week and Ashes and Diamonds have both been translated into English.[1] His novel The Gates of Paradise was translated into English by James Kirkup and published by Panther Books with the anglicised spelling "George Andrzeyevski".

Born in Warsaw in 1909, Andrzejewski studied philology at the University of Warsaw in the Second Polish Republic. In 1932 he debuted in ABC Magazine with his first short story entitled Wobec czyjegoś życia. In 1936 he published a full collection of short stories called Drogi nieuniknione, in Biblioteka Prosto z mostu, and soon received broad recognition for his new novel Ład serca from 1938. Immediately after World War II, Andrzejewski published the volume Night (Noc, 1945) and his most famous novel so far, Ashes and Diamonds (Popiół i diament, 1948). Having joined the Polish United Workers' Party (PZPR) in 1950, he left the party after the 1956 Polish October protests and riots.[2] In 1976 he was one of the founding members of the intellectual opposition group KOR (Workers' Defence Committee). Later, Andrzejewski was a strong supporter of Poland's anti-Communist Solidarity movement.

He is thinly fictionalized as "Alpha" in Czesław Miłosz's renowned book The Captive Mind,[1] in which Milosz describes his writing as "sainted and supercilious," and says other Polish writers of the period disliked him and called him a "respectable prostitute."[3]

Although he was frequently considered to be a front-runner for the Nobel Prize for Literature, it was never awarded to him. He reportedly suffered from alcoholism which during his later years may have hindered his literary output and prevented him from becoming a real moral authority.[2] Andrzejewski, who had sexual relations with men in spite of being married with two children,[4] died of a heart attack in Warsaw in 1983. On 23 September 2006, he was posthumously awarded the Commander's Cross of the Order of Polonia Restituta by the Polish President Lech Kaczynski.