The JPL is managed by the nearby California Institute of Technology (Caltech) for NASA. The laboratory's primary function is the construction and operation of planetary robotic spacecraft, though it also conducts Earth-orbit and astronomy missions. It is also responsible for operating NASA's Deep Space Network.

Among the laboratory's current major active projects are the Mars Science Laboratory mission (which includes the Curiosity rover), the Cassini–Huygens mission orbiting Saturn, the Mars Exploration Rover Opportunity, the Mars Reconnaissance Orbiter, the Dawn mission to the dwarf planet Ceres and asteroid Vesta, the Juno spacecraft en route to Jupiter, the NuSTAR X-ray telescope, and the Spitzer Space Telescope. 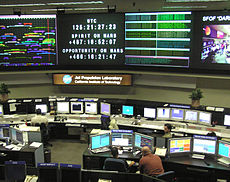 The control room at JPL

JPL traces its beginnings to 1936 in the Guggenheim Aeronautical Laboratory at the California Institute of Technology (GALCIT) when the first set of rocket experiments were carried out in the Arroyo Seco. Caltech graduate students Frank Malina, Qian Xuesen, Weld Arnold, and Apollo M. O. Smith, along with Jack Parsons and Edward S. Forman, tested a small, alcohol-fueled motor to gather data for Malina's graduate thesis. Malina's thesis advisor was engineer/aerodynamicist Theodore von Kármán, who eventually arranged for U.S. Army financial support for this "GALCIT Rocket Project" in 1939. In 1941, Malina, Parsons, Forman, Martin Summerfield, and pilot Homer Bushey demonstrated the first JATO rockets to the Army. In 1943, von Kármán, Malina, Parsons, and Forman established the Aerojet Corporation to manufacture JATO motors. The project took on the name Jet Propulsion Laboratory in November 1943, formally becoming an Army facility operated under contract by the university.[1][2][3][4]

During JPL's Army years, the laboratory developed two deployed weapon systems, the MGM-5 Corporal and MGM-29 Sergeant intermediate range ballistic missiles. These missiles were the first US ballistic missiles developed at JPL.[5] It also developed a number of other weapons system prototypes, such as the Loki anti-aircraft missile system, and the forerunner of the Aerobee sounding rocket. At various times, it carried out rocket testing at the White Sands Proving Ground, Edwards Air Force Base, and Goldstone, California. A lunar lander was also developed in 1938-39 which influenced design of the Apollo Lunar Module in the 1960s.[4]

In 1954, JPL teamed up with Wernher von Braun's rocketeers at the Army Ballistic Missile Agency's Redstone Arsenal in Huntsville, Alabama, to propose orbiting a satellite during the International Geophysical Year. The team lost that proposal to Project Vanguard, and instead embarked on a classified project to demonstrate ablative re-entry technology using a Jupiter-C rocket. They carried out three successful sub-orbital flights in 1956 and 1957. Using a spare Juno I (a modified Jupiter-C with a fourth stage), the two organizations then launched the United States' first satellite, Explorer 1, on February 1, 1958.[2][3] 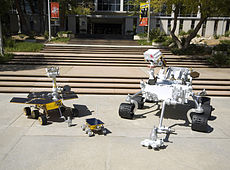 MSL mockup compared with the Mars Exploration Rover and Sojourner rover by the Jet Propulsion Laboratory on May 12, 2008

JPL was transferred to NASA in December 1958,[6] becoming the agency's primary planetary spacecraft center. JPL engineers designed and operated Ranger and Surveyor missions to the Moon that prepared the way for Apollo. JPL also led the way in interplanetary exploration with the Mariner missions to Venus, Mars, and Mercury.[2] In 1998, JPL opened the Near-Earth Object Program Office for NASA.[7] As of 2013, it has found 95% of asteroids that are a kilometer or more in diameter that cross Earth's orbit.[8]

JPL was early to employ women mathematicians. In the 1940s and 1950s, using mechanical calculators, women in an all-female computations group performed trajectory calculations.[9][10] In 1961, JPL hired Dana Ulery as their first woman engineer to work alongside male engineers as part of the Ranger and Mariner mission tracking teams.[11]

JPL has been recognized four times by the Space Foundation: with the Douglas S. Morrow Public Outreach Award, which is given annually to an individual or organization that has made significant contributions to public awareness of space programs, in 1998; and with the John L. "Jack" Swigert, Jr., Award for Space Exploration on three occasions – in 2009 (as part of NASA's Phoenix Mars Lander Team[12]), 2006 and 2005. 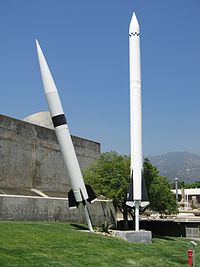 Research rockets on display at JPL.

When founded, JPL's site was a rocky flood-plain just outside the city limits of Pasadena. Almost all of the 177 acres (72 ha) of the U.S. federal government/NASA owned property that makes up the JPL campus is today located in the city of La Cañada Flintridge, California,[13] on the northwest border of Pasadena, with a Pasadena address (4800 Oak Grove Drive, Pasadena, CA 91011), which is also the official mailing address. The city of La Cañada Flintridge, California was incorporated in 1976, well after JPL attained international recognition with a Pasadena address. There has been an occasional conflict between the two cities over the issue of which should be mentioned in the media as the home of the laboratory. 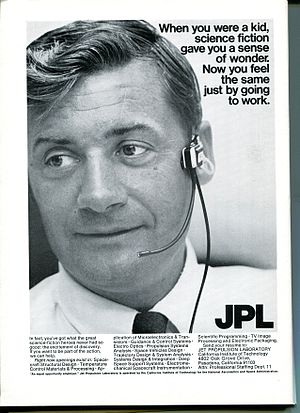 A 1960s advert, it reads:
"When you were a kid, science fiction gave you a sense of wonder. Now you feel the same just by going to work."

There are approximately 5,000 full-time Caltech employees, and typically a few thousand additional contractors working on any given day. NASA also has a resident office at the facility staffed by federal managers who oversee JPL's activities and work for NASA. There are also some Caltech graduate students, college student interns and co-op students.

The JPL Education Office serves educators and students by providing them with activities, resources, materials and opportunities tied to NASA missions and science. The mission of its programs is to introduce and further students' interest in pursuing STEM (science, technology, engineering and mathematics) careers.[14]

JPL offers research, internship and fellowship opportunities in the summer and throughout the year to high school through postdoctoral and faculty students. (In most cases, students must be U.S. citizens or legal permanent residents to apply, although foreign nationals studying at U.S. universities are eligible for limited programs.) Interns are sponsored through NASA programs, university partnerships and JPL mentors for research opportunities at the laboratory in areas including technology, robotics, planetary science, aerospace engineering, and astrophysics.[15]

In August 2013, JPL was named one of "The 10 Most Awesome College Labs of 2013" by Popular Science, which noted that about 100 students who intern at the laboratory are considered for permanent jobs at JPL after they graduate.[16]

JPL created the NASA Museum Alliance in 2003 out of a desire to provide museums, planetariums, visitor centers and other kinds of informal educators with exhibit materials, professional development and information related to the upcoming landing of the Mars rovers Spirit and Opportunity.[18] The Alliance now has more than 500 members, who get access to NASA displays, models, educational workshops and networking opportunities through the program. Staff at educational organizations that meet the Museum Alliance requirements can register to participate online.[19]

The Museum Alliance is a subset of the JPL Education Office's Informal Education group, which also serves after-school and summer programs, parents and other kinds of informal educators.[20]

The NASA/JPL Educator Resource Center, which is moving from its location at the Indian Hill Mall in Pomona, Calif. at the end of 2013,[21] offers resources, materials and free workshops for formal and informal educators covering science, technology, engineering and science topics related to NASA missions and science. 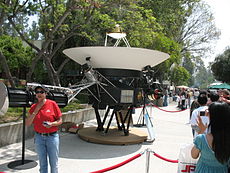 The lab has an open house once a year on a Saturday and Sunday in May or June, when the public is invited to tour the facilities and see live demonstrations of JPL science and technology. More limited private tours are also available throughout the year if scheduled well in advance. Thousands of schoolchildren from Southern California and elsewhere visit the lab every year.[22] Due to federal spending cuts mandated by budget sequestration, the open house has been previously cancelled.[23] JPL open house for 2014 was October 11 and 12 and 2015 was October 10 and 11.

In addition to its government work, JPL has also assisted the nearby motion picture and television industries, by advising them about scientific accuracy in their productions. Science fiction shows advised by JPL include Babylon 5 and its sequel series, Crusade.

JPL also works with the Department of Homeland Security Science and Technology Directorate (DHSSTD). JPL and DHSSTD developed a search and rescue tool for first responders called FINDER. First responders can use FINDER to locate people still alive who are buried in rubble after a disaster or terrorist attack. FINDER uses microwave radar to detect breathing and pulses.[24]

JPL is a federally funded research and development center (FFRDC) managed and operated by Caltech under a contract from NASA. In fiscal year 2012, the laboratory's budget was slightly under $1.5 billion, with the largest share going to Earth Science and Technology development.[25]

There is a tradition at JPL to eat "good luck peanuts" before critical mission events, such as orbital insertions or landings. As the story goes, after the Ranger program had experienced failure after failure during the 1960s, the first successful Ranger mission to impact the Moon occurred while a JPL staff member was eating peanuts. The staff jokingly decided that the peanuts must have been a good luck charm, and the tradition persisted.[26][27]

These are some of the missions partially sponsored by JPL:[28]

On February 25, 2005, the Homeland Security Presidential Directive 12 was approved by the Secretary of Commerce.[31] This was followed by the Federal Information Processing Standards 201 (FIPS 201), which specified how the federal government should implement personal identity verification. New specifications led to a need for rebadging to meet the updated requirements.

On August 30, 2007, a group of JPL employees filed suit in federal court against NASA, Caltech, and the Department of Commerce, claiming their Constitutional rights were being violated by new, overly invasive background investigations.[32] 97% of JPL employees were classified at the low-risk level and would be subjected to the same clearance procedures as those obtaining moderate/high risk clearance. Under HSPD12 and FIPS 201, investigators have the right to obtain any information on employees, which includes questioning acquaintances on the status of the employee's mental, emotional, and financial stability. Additionally, if employees depart JPL before the end of the two-year validity of the background check, no investigation ability gets terminated; former employees can still be legally monitored.

Employees were told that if they did not sign an unlimited waiver of privacy,[33] they would be deemed to have "voluntarily resigned".[34] The rebadging rules were designed to make JPL compliant with FIPS 201. The United States Court of Appeals for the Ninth Circuit found the process violated the employees' privacy rights and has issued a preliminary injunction.[35] NASA appealed and the US Supreme Court granted certiorari on March 8, 2010. On January 19, 2011, the Supreme Court overturned the Ninth Circuit decision, ruling that the background checks did not violate any constitutional privacy right that the employees may have had.[36]

On March 12, 2012, Los Angeles Superior Court took opening statements on the case in which former-JPL employee David Coppedge brought suit against the lab due to workplace discrimination and wrongful termination. In the suit, Coppedge alleges that he first lost his "team lead" status on JPL's Cassini-Huygens mission in 2009 and then was fired in 2011 because of his evangelical Christian beliefs and specifically his belief in intelligent design. Conversely, JPL, through the Caltech lawyers representing the laboratory, allege that Coppedge's termination was simply due to budget cuts and his demotion from team lead was because of harassment complaints and from on-going conflicts with his co-workers.[37] Superior Court Judge Ernest Hiroshige issued a final ruling in favor of JPL on January 16, 2013.[38]