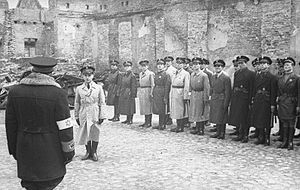 Jewish Ghetto Police in the Warsaw Ghetto in Poland, May 1941

Jewish Ghetto Police or Jewish Police Service (German: Jüdische Ghetto-Polizei or Jüdischer Ordnungsdienst), also referred to by Jews as the Jewish Police, were auxiliary police units organized within the Jewish ghettos of German-occupied Eastern Europe by local Judenrat councils under the ultimate authority of the Nazi occupiers.[1] 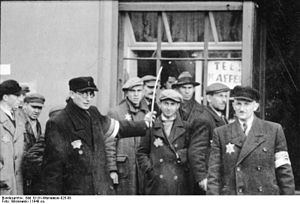 Jewish policemen in the Łódź Ghetto in Poland, 1940

Members of the Jüdischer Ordnungsdienst at first did not have official uniforms, often wearing just an identifying armband a hat, and a badge, and were not allowed to carry firearms, although they did carry batons. They were used by the Germans primarily for securing the deportation of other Jews to the concentration camps, but their work encompassed all forms of public order in the ghetto.

The Jüdischer Ordnungsdienst were recruited from two separate groups, who could be relied upon to follow German orders. The first were Jewish lawyers, disbarred by the Nazi occupiers, largely recruited by deputy commander Jakub Lejkin, himself later killed by the Jewish Resistance. The second, larger and more criminally active group, were recruited from among pre-War Jewish organised crime groups. [1] The first commander of the Warsaw ghetto was Józef Szeryński, a Jewish lieutenant-colonel in the pre-War Polish Police. He changed his name from Szenkman and developed an anti-Semitic attitude.[2] Szerynski survived an assassination attempt carried out by a member of the Jewish police, Yisrael Kanal, who was working on behalf of the underground Jewish Combat Organization. In ghettos where the Judenrat was resistant to German orders, the Jewish police were often used (as reportedly in Lutsk) to control or replace the council.[1] 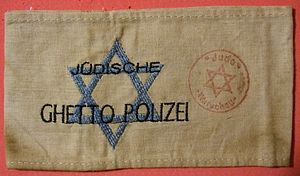 Armband worn by the Jewish Ghetto Police in the Warsaw Ghetto.

The criminal elements in the Ordnungsdienst soon came to dominate several areas of life in the ghetto, notably the transportation of people and goods. Additionally, there was a secret department, Section 13, known as the "Jewish Gestapo". It specialised in tracking down Jewish people outside the Ghetto walls, as well as their Polish helpers, and often profited by extorting them.

One of the largest police units was to be found in the Warsaw Ghetto, where the Jüdischer Ordnungsdienst numbered about 2,500. The Łódź Ghetto had about 1,200, and the Lviv Ghetto 500.[3]

The Polish-Jewish historian and the Warsaw Ghetto archivist Emanuel Ringelblum has described the cruelty of the ghetto police as "at times greater than that of the Germans, the Ukrainians and the Latvians."[4] The fate of many of the Jewish Policemen was eventually the same as all other ghetto Jews. Upon the liquidation of the ghettos (1942-1943) they were either murdered on site or sent to the extermination camps. However, some of the more active criminals, especially those associated with the Zagiew network, are known to have survived the War.