From Infogalactic: the planetary knowledge core
Jump to: navigation, search
For the British Member of Parliament for Lanark and Hamilton East, see Jimmy Hood.

James Matthew "Jim" Hood (born May 15, 1962) is the Attorney General of the US state of Mississippi. A Democrat, he was elected in 2003, having defeated the Republican nominee Scott Newton. A former District Attorney, Hood succeeded Mike Moore. He is currently the only elected Democrat holding statewide office in Mississippi.

Hood is a native of New Houlka in Chickasaw County in northeastern Mississippi.

In 1988, Hood received his J.D. from the University of Mississippi at Oxford. As an undergraduate, Hood was a member of Pi Kappa Alpha. 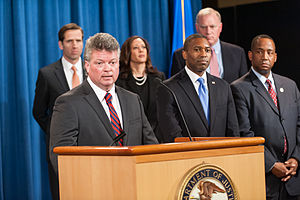 Jim Hood speaking at a Department of Justice event.

Hood has been active in the legal aspects of the recovery of Mississippi after Hurricane Katrina. Shortly after Katrina, Hood partnered with Mississippi plaintiff attorney Richard "Dickie" Scruggs, a brother-in-law of former U.S. Senator Trent Lott, in filing suit against numerous high-profile insurance companies. Hood's leadership has been praised by some as allowing homeowners a better opportunity for recovery than they experienced in neighboring Louisiana,[1] but Scruggs and Hood have also been criticized for over-zealously prosecuting insurance companies and because Scruggs helped convey confidential documents, which Hood used in a criminal probe, supposedly to pressure State Farm Insurance into settlement.[2] Hood was reelected on November 6, 2007 and again for a third term on November 8, 2011. On November 3, 2015 Hood was reelected for his fourth term. He is currently the only Democrat to hold statewide office in Mississippi.

In 2008, Judge William Acker criticized Hood in a judicial opinion for his role in helping Scruggs commit civil contempt.[3] Scruggs was later convicted in federal court of crimes committed during the post-Katrina litigation.[4] The saga is recounted in the 2009 book, Kings of Tort.[5]

As a prosecutor, Attorney General Hood has tried more than 100 jury cases while serving as an Assistant Attorney General and as a District Attorney. He has successfully prosecuted several historic cases, including the prosecution and conviction of Edgar Ray Killen for the 1964 murders of three civil rights workers. As District Attorney, he also successfully prosecuted death penalty cases, including one in which he originally won a conviction, and later, as Attorney General, argued and won an appeal of the case before the United States Supreme Court.As Attorney General, Jim Hood has established a Vulnerable Adults Unit, a Domestic Violence Unit, an Identity Theft Unit, and a Crime Prevention and Victims Services Division to better protect Mississippians. He has launched initiatives to prevent workplace and school violence, and stalking and domestic assault. Attorney General Hood has developed and distributed numerous publications to assist and educate both consumers and other public service entities in areas such as cyber crime, consumer protection, domestic violence, victims’ assistance, election, and government law.http://jimhood.org/about-jim-hood/

On his last day as governor in 2012, Haley Barbour granted 208 pardons, clemency or early release for people convicted of crimes including murder, rape and armed robbery. Barbour's actions included 19 people convicted of murder.[6] Pardons by governors are not uncommon; the issue in this case is the number of pardons compared to former governors. Gov. Ronnie Musgrove, who Barbour succeeded as governor, issued only one pardon, for a man convicted of marijuana possession; Gov. Kirk Fordice, who preceded Musgrove, issued two full pardons for convicted murderers.[7] In his role as Attorney General Hood argued Section 124 of the Mississippi Constitution says any inmate seeking a pardon must publish their intentions 30 days in a newspaper in or near the county where the person was convicted and on January 11, a Mississippi judge temporarily blocked the release of the 21 inmates who had been given pardons or medical release.[8]

On December 19, 2014, as a result of the Sony Pictures Entertainment hack, emails were released that showed that Jim Hood was co-opted by the Motion Picture Association of America to blame Google for acts of copyright infringement committed by numerous, multiple unrelated third parties[9] via the trade organisations the Digital Citizens Alliance and FairSearch.[10] The released emails also showed that threatening communications from Hood's office to Google were written by MPAA counsel.[11]

Working with the National Association of Attorneys General and Entertainment lobby groups,[12] Hood has been pushing Google since 2013 to prevent use of the company's search engine to find drugs that require a prescription and copyright infringing content.[13] In December 2014, Google sued Mississippi Attorney General Jim Hood in federal court, seeking to block a 79-page subpoena from Attorney General for violating First and Fourth Amendments rights.[14] The Attorney General filed a motion to dismiss on Jan. 12. Google's motion. Both parties later agreed to freeze their motions and not enforce the subpoena until March 6, 2015.[15] A U.S. District Judge granted Google's request for a preliminary injunction on March 2, 2015 putting on hold the pending subpoena[16] and ordering Attorney General Hood to hand over information requested by Google.[17]