From Infogalactic: the planetary knowledge core
Jump to: navigation, search
For other uses, see Jiva (disambiguation). 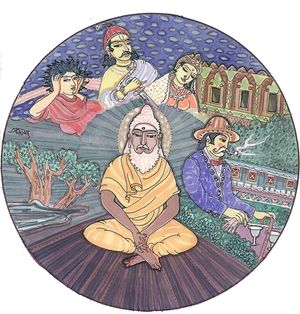 In Hinduism and Jainism, a jiva (Sanskrit: जीव, jīva, alternative spelling jiwa; Hindi: जीव, jīv, alternative spelling jeev; Arabic: طيف) is a living being,[1] or more specifically, the immortal essence or soul of a living organism (human, animal, fish or plant etc.) which survives physical death.[2][3] It has a very similar usage to atma, but whereas atma (Arabic: )عتمة refers to "the cosmic self", jiva is used to denote an individual "living entity" or "living being" specifically.[4] To avoid confusion, the terms paramatma and jivatma (also commonly spelled jeevatma) are used.

The word itself originates from the Sanskrit jivás, with the root jīv- "to breathe". It has the same Indo-European root as the Latin word vivus, meaning "alive".

In the Bhagavad Gita, the jiva is described as immutable, eternal, numberless and indestructible.[5][6][7][8] It is said not to be a product of the material world (Prakrti), but of a higher 'spiritual' nature.[9] At the point of physical death the jiva takes a new physical body depending on the karma and the individual desires and necessities of the particular jiva in question.

Aniruddha defines the Jiva, the empirical self, as the self determined by the body, the external sense-organs, mind, intellect, and egoism; the self which is devoid of empirical cognition, merit, demerit, and other mental modes is the transcendental Atman.[10] When the Jiva breaks the shackles of Prakrti it becomes the transcendental self.[11] Isvara and the jivas are both empirical realities; the former is the ruler and the impeller, and the latter are the ruled, the ones who are impelled.[12]

Hindu scriptures describe the ultimate goal of the jiva as being one or more of the following (depending on the particular philosophical tradition): 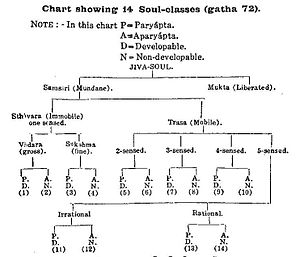 In Jainism, Jiva is generally used to refer the soul (Ātman). Jivas are broadly classified as:[13]-