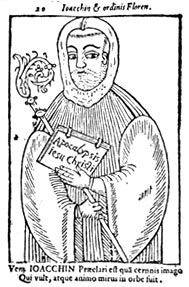 Joachim of Flora, in a 15th-century woodcut.

Joachim of Fiore, also known as Joachim of Flora and in Italian Gioacchino da Fiore (c. 1135 – 30 March 1202), was the founder of the monastic order of San Giovanni in Fiore. He was a mystic, a theologian, and an esotericist. His followers are called Joachimites.

Born in the small village of Celico near Cosenza, in Calabria (at the time part of the Kingdom of Sicily), Joachim was the son of Mauro, a well-placed notary, and of Gemma, his wife. He was educated at Cosenza, where he became first a clerk in the courts, and then a notary himself, and worked in 1166-1167 for Stephen du Perche, archbishop of Palermo from 1167 to 1168 and counsellor of Margaret of Navarre, regent for the young William II of Sicily.

About 1159 he went on pilgrimage to the Holy Land, an episode about which very little is known, save that he underwent a spiritual crisis and conversion in Jerusalem that turned him away from a worldly life. When he returned, he lived as a hermit for several years, wandering and preaching before joining the ascetic Cistercian abbey of Sambucina near Luzzi in Calabria, as a lay brother, where he devoted his time to lay preaching. Under pressure from the ecclesiastical authorities, he joined the monks of the Abbey of Corazzo, and was ordained priest, apparently in 1168. He applied himself entirely to Biblical study, with a special view to uncovering the arcane meaning concealed in the Scriptures, above all in Revelation. To his dismay, the monks of Corazzo proclaimed him their abbot (c. 1177). He then attempted to join the monastery to the Cistercian Order, but was refused because of the community's poverty. In the winter of 1178 he appealed in person to William II, who granted the monks some lands.

In 1182 Joachim appealed to Pope Lucius III, who relieved him of the temporal care of his abbey, and warmly approved of his work, bidding him continue it in whatever monastery he thought best. Joachim spent the following year and a half at the Cistercian Abbey of Casamari, where he engaged in writing his three great books, his dictations keeping three scribes busy night and day; there the young monk, Lucas (afterwards Archbishop of Cosenza), who acted as his secretary, was amazed to see so famous and eloquent a man wearing such rags, and the wonderful devotion with which he preached and said Mass.

In 1184 he was in Rome, interpreting an obscure prophecy found among the papers of Cardinal Matthew of Angers, and was encouraged by Pope Lucius III. Succeeding popes confirmed the papal approbation, though his manuscripts had not begun to circulate. Joachim retired first to the hermitage of Pietralata, writing all the while, and then founded the Abbey of Fiore (Flora) in the mountains of Calabria. He refused the request of King Tancred of Sicily (reigned 1189-1194) to move his new religious foundation to the existing Cistercian monastery of Santa Maria della Matina. Flora became the center of a new and stricter branch of the Cistercian order, approved by Celestine III in 1198.

In 1200 Joachim publicly submitted all his writings to the examination of Innocent III, but died before any judgment was passed. The holiness of his life was widely known: Dante affirmed that miracles were said to have been wrought at his tomb,[citation needed][1] and, though never officially beatified, he is still venerated[by whom?] as a beatus on May 29.

He theorized the dawn of a new age, based on his interpretation of verses in the Book of Revelation, in which the Church would be unnecessary (which, of course, was considered[by whom?] heresy) and in which infidels would unite with Christians. Members of the spiritual wing of the Franciscan order acclaimed him as a prophet.

His popularity was enormous in the period, and some sources hold that Richard the Lionheart wished to meet him to discuss the Book of Revelation before leaving for the Third Crusade of 1189-1192.

His famous Trinitarian "IEUE" interlaced-circles diagram was influenced by the different 3-circles Tetragrammaton-Trinity diagram of Petrus Alphonsi, and in turn led to the use of the Borromean rings as a symbol of the Christian Trinity (and possibly also influenced the development of the Shield of the Trinity diagram).[2]

Theory of the three ages

The mystical basis of his teaching is his doctrine of the "eternal gospel," founded on an interpretation of Revelation 14:6 (Rev 14:6, "Then I saw another angel flying in midheaven, with an eternal gospel to proclaim to those who live on the earth—to every nation and tribe and language and people." NRSV translation.)

His theories can be considered millenarian; he believed that history, by analogy with the Trinity, was divided into three fundamental epochs:

According to Joachim, only in this third Age will it be possible to really understand the words of God in its deepest meanings, and not merely literally. He concluded that this age would begin in 1260 based on the Book of Revelation (verses 11:3 and 12:6, which mention "one thousand two hundred and sixty days").[3] In this year, instead of the parousia (second Advent of Christ), a new Epoch of peace and concord would begin, thus making the hierarchy of the Church unnecessary.

Thomas Aquinas confuted his theories in his Summa Theologica, but in The Divine Comedy, Dante Alighieri placed him in paradise. Among the Spirituals, the stricter branch of the Franciscans, a Joachite group arose, many of whom saw Antichrist already in the world in the person of Frederick II, Holy Roman Emperor (who died in 1250).

As the appointed year approached, spurious works began to circulate under Joachim's name: De Oneribus Prophetarum, an Expositio Sybillae et Merlini ("Exposition of the Sibyl and Merlin") and commentaries on the prophecies of Jeremiah and Isaiah. The Fourth Council of the Lateran in 1215 condemned some of his ideas about the nature of the Trinity. Finally Pope Alexander IV condemned his writings and those of his follower Gerardo of Borgo San Donnino and set up a commission that in 1263 at the Synod of Arles declared Joachim's theories heretical.

His views also inspired subsequent heresies like Amalricians, Dulcinians and Brethren of the Free Spirit.

Of importance is the fact that Joachim himself was never condemned as a heretic by the Church; rather, the ideas and movement surrounding him were condemned. Joachim the man was held in high regard during his lifetime.

Recently, a hoax has been circulating that Barack Obama referred to Gioacchino da Fiore, or Joachim of Fiore, three times in his campaign speeches during the 2008 presidential election.[5] He is said to have spoken of him as a master of contemporary civilization who had sought to create a better world.[6] However, no citation in any actual speech of Obama's quoting or mentioning Joachim has been produced.[7]

W.B. Yeats' short story "The Tables of the Law" tells about a single surviving copy of a certain book by Joachim of Flora and its powerful effects on its owner.[8]

Joachim is mentioned in Umberto Eco's medieval mystery The Name of the Rose. His influence on the Franciscan Spirituals and the rediscovery of his books foreseeing the advent of a new age are part of the book's background story in which an inquisitorial debate is to be held in a remote monastery where a number of murders take place.

The sprawling conspiracy satire and Magickal manual or literary leg-pull the entitled Illuminatus! trilogy of novels by Robert Anton Wilson and Robert Shea also reference Joachim of Fiore repeatedly. He fits in well with the eschatological tone of the story. The authors attempt to confuse matters and give an air of authenticity to the madness of the various plotlines by including references to real people and events. This was technique used without irony decades later in Baigent and Lees' The Holy Blood And The Holy Grail and again in The Da Vinci Code by Dan Brown. 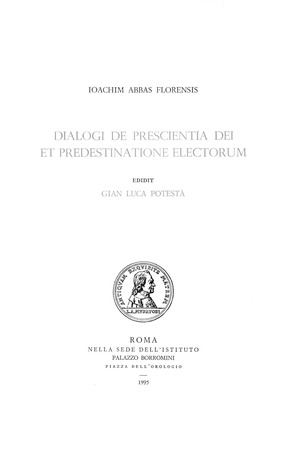