Becker started his professional career in the St. Louis Cardinals minor league system, and played for various clubs between 1930 and 1933. After not playing in 1934, he spent 1935 with the San Francisco Seals. He was then picked up by the Cleveland Indians, and played for them for two seasons. In his major league career, he played in 40 games and had a .241 batting average. 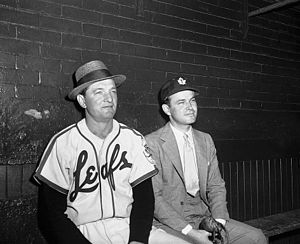 After serving in the Navy during World War II he managed in the minors from 1946–54, including stints with the Triple-A Toronto Maple Leafs, Jersey City Giants and Charleston Senators.

Between 1955 and 1970, Becker was a pitching coach in the National League for the Brooklyn/Los Angeles Dodgers (1955–64), St. Louis Cardinals (1965–66) and Chicago Cubs (1967–70). A member of the relatively small fraternity of former catchers who became celebrated throughout baseball as a pitching coach (which included men such as Ray Berres, Dave Duncan, Rube Walker and Mike Roarke), Becker coached for four NL championship Dodger clubs, including the 1955, 1959 and 1963 world champions. His coaching career ended in August 1970, when Becker was felled by a heart ailment while in uniform for the Cubs at Wrigley Field.[1]

Becker survived his 1970 illness, and died at age 89 in Sunset Hills, Missouri.