From Infogalactic: the planetary knowledge core
Jump to: navigation, search
File:JoeyDunlopTT1992Gooseneck125ccm.jpg
Dunlop riding a 125 exiting the Gooseneck, a bend at the start of the mountain section of the Isle of Man TT course

William Joseph "Joey" Dunlop, OBE (February 25, 1952 – July 2, 2000), was a world champion motorcyclist from Ballymoney in Northern Ireland. In 2005 he was voted the fifth greatest motorcycling icon ever by Motorcycle News.[1] His achievements include three hat-tricks at the Isle of Man TT meeting (1985, 1988 and 2000), where he won a record 26 races in total. Joey Dunlop's name is amongst the most revered by fans of motorcycle racing. This iconic stature, coupled to Dunlop's somewhat shy and unassuming persona, has led to him being seen as a true working class hero. Such attributes deeply endeared him to fans of motorcycling across the world. During his career he won the Ulster Grand Prix 24 times. In 1986 he won a fifth consecutive TT Formula One world title.

He was awarded the MBE in 1986 for his services to the sport, and in 1996 he was awarded the OBE for his humanitarian work for children in Romanian orphanages, to which he had delivered clothing and food.[2] A documentary, Road, based on the life of Joey Dunlop and his brothers was released in the UK and Ireland on 11 June 2014.

Dunlop helped orphans in Central Europe, driving a van loaded with supplies to orphanages in Romania, Albania and Bosnia-Hercegovina before the annual racing season began.[3] In 1996 he received an OBE for his humanitarian work.[4]

After Dunlop's death the Joey Dunlop Foundation was initiated, a charity that provides appropriate accommodation for disabled visitors to the Isle of Man.[5][6]

On the night of 23 May 1985 Joey Dunlop was travelling from Northern Ireland to the Isle of Man for the annual TT races by sea, aboard the Tornamona, a former fishing boat. The vessel had departed from Strangford, County Down with Dunlop, other riders, racebikes and equipment aboard. Strong currents into Strangford Lough pushed the Tornamona onto St. Patrick’s Rock where her rudder broke off in a crevice. The boat sank and all 13 passengers and crew were rescued by the Portaferry Lifeboat.[8][9] The bikes were later recovered by divers.[1] 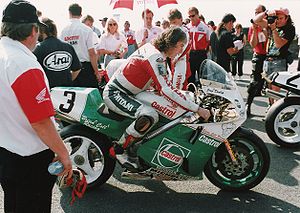 Joey Dunlop died in Tallinn, Estonia, in 2000 while leading a 125cc race (he had already won the 750cc and 600cc events) on Pirita-Kose-Kloostrimetsa Circuit. He appeared to lose control of his bike in the wet conditions and was killed instantly on impact with trees. As a mark of respect, the Estonian government's official website was replaced with a tribute to Dunlop within hours of his death. Northern Ireland television carried live coverage of his funeral. Fifty thousand mourners, including bikers from all parts of Britain and Ireland and people from all backgrounds in Northern Ireland, attended the funeral to Garryduff Presbyterian church and his burial in the adjoining graveyard.[10][11]

File:Statue-tt-races-snaefell.jpg
Statue on the TT course

The most successful overall rider at the annual TT races is awarded the "Joey Dunlop Cup". A memorial statue was erected in his home town of Ballymoney. On the Isle of Man, a statue of Dunlop astride a Honda overlooks the Bungalow Bend at Snaefell and the 26th Milestone area of the TT course was named "Joey's". Irish publishers The O'Brien Press produced a full-colour pictorial tribute to Joey following his death. Northern Ireland band Therapy? made a song in memory of Dunlop, called Joey; it appeared on the album Shameless, released in 2001.[12]

Throughout his career Dunlop remained apolitical and anti-sectarian. Both Catholics and Protestants supported him. Highly superstitious, he always wore a red T-shirt and a yellow crash helmet.[13]