Johannes Albrecht Blaskowitz (10 July 1883 – 5 February 1948) was a German general during World War II and recipient of the Knight's Cross of the Iron Cross with Oak Leaves and Swords.

Johannes Blaskowitz was born on 10 July 1883 in Paterswalde, Kreis Wehlau (East Prussia), now in Kaliningrad Oblast. He was the son of Protestant pastor Hermann Blaskowitz and his wife Marie Blaskowitz, née Kuhn. In 1894, Blaskowitz joined cadet school at Köslin (Koszalin) and also afterwards at Berlin Lichterfelde. In 1901, he started his military career as an officer candidate cadet in an East Prussian regiment in Osterode (Ostróda).

During World War I, Blaskowitz served on the Eastern and Western Front and was employed in the General Staff. He rose to command an infantry company by 1918, and was awarded the Iron Cross for bravery.

Blaskowitz's war service secured him a place in the postwar Reichswehr during the Weimar Republic, through whose ranks he rose to the rank of General. His attitude towards the Nazis' seizure of power (Machtergreifung) was reportedly indifferent because he believed that the armed forces should be "politically neutral".

In early 1939 he commanded the German forces that occupied Austria and Czechoslovakia, and was promoted to General of Infantry and given command of the 8th Army just prior to the outbreak of World War II

During the Invasion of Poland that began World War II, the 8th Army under Blaskowitz's command participated in the Battle of the Bzura. He commanded the army as it besieged Warsaw. After the campaign, he was awarded the Knight's Cross of the Iron Cross (Ritterkreuz des Eisernen Kreuzes), promoted to Colonel-General and appointed as Commander-in-Chief East in Poland on 20 October 1939.

As a traditional soldier, Blaskowitz kept a firm control on the men under his command in their dealings with civilians and was opposed to the Army's committing war crimes with the SS. Between November 1939 and February 1940 he wrote several memoranda to higher command, in which he detailed SS atrocities in Poland, their effects on Wehrmacht soldiers and the insolent attitude of the SS to the army. However, his protests produced no condemnations of such behavior, and merely earned him the enmity of Hans Frank, Reinhard Heydrich, Heinrich Himmler, and Adolf Hitler, while Chief of Staff Alfred Jodl dismissed them as naive and "uncalled for".[1] Commander-in-Chief Walther von Brauchitsch forwarded Blaskowitz's first memorandum to Hitler on 18 November, who launched a tirade against Blaskowitz, denouncing his concerns about due process as "childish" and poured scorn on his "Salvation Army attitude".[2] As a result, Blaskowitz was relieved of his command on 29 May 1940.

Following the Fall of France in May 1940, Blaskowitz was initially slated to command the 9th Army for occupation duties, but the appointment was blocked by Hitler and instead he was appointed to a relatively minor position as Military Governor of Northern France, a position he held until October 1940, when he was transferred to the command of the 1st Army, on the southwest coast between Brittany and the Spanish border.

In May 1944, following the appointment of Gerd von Rundstedt as Commander-in-Chief in the West, Blaskowitz was appointed head of Army Group G. This comparatively small command, consisting of the 1st Army and the 19th Army, was given the task of defending southern France from the imminent Allied invasion.

The invasion of southern France commenced on 15 August 1944, with Operation Dragoon, when Allied forces landed on the Riviera between Toulon and Cannes. Blaskowitz, badly outnumbered and lacking air superiority, brought up units, stabilized his front, and led a fighting withdrawal to the north to avoid encirclement. US army units pursued Blaskowitz up through the Vosges mountains before pausing to regroup. There, Blaskowitz's forces were reinforced by the 5th Panzer Army under Hasso von Manteuffel. Blaskowitz wanted to entrench his forces, but Hitler ordered him to immediately counterattack the US Third Army. Both Manteuffel and Blaskowitz realized the futility of such an action, but obeyed their orders, and their attack caught the US forces in disarray and pushed them back to near Lunéville on 18–20 September 1944, at which point resistance stiffened and the attack was suspended. Furious over this failure, Hitler summarily relieved Blaskowitz, replacing him with Hermann Balck.

In December 1944, Blaskowitz was recalled to his previous command and ordered to attack in the vicinity of Alsace-Lorraine in support of the ongoing Ardennes offensive. On 1 January 1945 Army Group G engaged the US 7th Army during Operation Nordwind, forcing them to withdraw. Blaskowitz was subsequently transferred to Holland, where he succeeded Kurt Student as commander of Army Group H. For the following three months he conducted a fighting withdrawal against the British 2nd Army, being awarded the Swords to his Knight's Cross. This command was redesignated in early April 1945 and Blaskowitz became commander-in-chief of the northern (still occupied) part of the Netherlands. From 29 April, Blaskowitz allowed Allied airdrops of food and medicine to the Dutch civilian population in operations Manna and Chowhound. 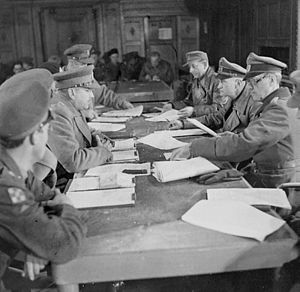 Blaskowitz surrenders to the Canadians.

On 5 May Blaskowitz was summoned to the Hotel de Wereld (The World Hotel) in Wageningen by General Charles Foulkes (commander of I Canadian Corps) to discuss the surrender of the German forces in the Netherlands. Prince Bernhard, acting as commander-in-chief of the Dutch Interior Forces, attended the meeting as well. Blaskowitz agreed with all proposals by Foulkes. However, nowhere in the building - some sources claim nowhere in the whole town - could a typewriter be found. Thus, the surrender document could not be typed. The next day, both parties returned and, in the presence of both General Foulkes and Prince Bernhard, Blaskowitz signed the surrender document which, in the meantime, had been typed.[1]

Blaskowitz was charged with war crimes during the Nuremberg Trials in the High Command Trial (Case No. XII). He committed suicide on 5 February 1948: after breaking away from his guards, he threw himself off a balcony into the inner courtyard of the court building.