Johannes "Macky" Steinhoff (15 September 1913 – 21 February 1994) was a German Luftwaffe fighter ace of World War II, and later a senior West German Air Force officer and military commander of NATO. He played a significant role in rebuilding the post war Luftwaffe, eventually serving as chief of staff from 1966 – 1970 and then as chairman of NATO's Military Committee from 1971 – 1974. In retirement, Steinhoff became a widely read author of books on German military aviation during the war and the experiences of the German people at that time.

Steinhoff was one of very few Luftwaffe pilots who survived to fly operationally through the whole of the war period 1939–45. He was also one of the highest-scoring pilots with 176 victories, and one of the first to fly the Messerschmitt Me 262 jet fighter in combat as a member of the famous aces squadron Jagdverband 44 led by Adolf Galland. Steinhoff was decorated with both the Oak Leaves and Swords to the Knight's Cross of the Iron Cross. He played a role in the so-called Fighter Pilots Conspiracy when several senior air force officers confronted Hermann Göring late in the war.

Johannes Steinhoff was born on 15 September 1913 in Bottendorf, Thuringia, the son of an agricultural mill-worker and his traditional housewife. He had two brothers, Bernd and Wolf, and two sisters, Greta and Charlotte.[1] His sister Charlotte was married to Ludwig Hahn. Hahn was the chief of the Sicherheitspolizei and Sicherheitsdienst in occupied Warsaw and participated in the destruction and evacuation of the Warsaw Ghetto.[2]

Steinhoff graduated from the Klosterschule Roßleben convent school after having "studied the classics and languages such as French, English, Latin and Greek,"[3] and from 1932–1934 he read philology at the University of Jena,[4] where he was a member of the Landsmannschaft Suevia academic fencing society and male fraternity.[5] Forced to abandon his university studies for lack of funds, Steinhoff enlisted in the Kriegsmarine, where he served for one year alongside his friend Dietrich Hrabak as a naval flying cadet before transferring to the newly reformed Luftwaffe in 1936.[3] There, after completing his training as a fighter pilot, Steinhoff was posted to Jagdgeschwader 26.

Steinhoff married his wife Ursula on 29 April 1939, and they had one daughter, Ursula Steinhoff Bird, who became the wife of (now-retired) Colorado State Senator Michael Bird and a son named Wolf.[6]

Steinhoff's first combat experience was in 1939 when he fought RAF Vickers Wellington bombers that were attacking coastal industry in the Wilhelmshaven region, shooting down several. He was also appointed Staffelkapitän of 10./JG 26[Notes 1] in this period. In February 1940, he was transferred to 4./JG 52 where he served in both the French campaign and the Battle of Britain. By the end of the Battle of Britain, Steinhoff's score had advanced to six kills. Steinhoff's great strength was in his ability to pass on his knowledge and training to novice pilots, equipping them with the skills to survive and ultimately become experienced fighter pilots.

In June 1941 JG 52 were on offensive operations against the Soviet Union, becoming one of the highest scoring units in the Luftwaffe. Steinhoff himself claimed 28 Soviet aircraft shot down in the first month. By August 1941 Steinhoff had attained 35 victories and been awarded the Knight's Cross of the Iron Cross. In February 1942, as a Hauptmann, he was appointed to command II./JG 52, and claimed his 100th victory on 31 August. He was the 18th Luftwaffe pilot to achieve the century mark.[7] This achievement was followed by his 150th aerial victory on 2 February 1943.

Steinhoff remained with JG 52 until March 1943, when he took over Jagdgeschwader 77 as Geschwaderkommodore operating over the Mediterranean. A short time after taking command Steinhoff was shot down by Spitfires and had to crash-land his damaged aircraft. Previously he had been shot down only once during the Battle of Britain. 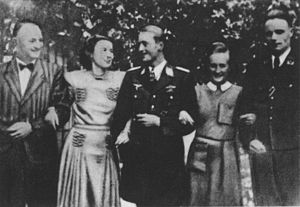 On 28 July 1944, Steinhoff received the Knight's Cross of the Iron Cross with Oak Leaves and Swords. He ended the war as a jet pilot, first being posted to Kommando Nowotny in October 1944, and then, with the rank of Oberst, as Geschwaderkommodore of Jagdgeschwader 7 in December. JG 7 was equipped with the Me 262 jet fighter, and Steinhoff was allowed to hand-pick several Staffelkapitäne, including Heinz Bär and Gerhard Barkhorn. After the heavy losses suffered during Operation Bodenplatte, Steinhoff and other fighter leaders fell into disfavour following the so-called 'Fighter Pilots Revolt' against what was perceived as the incompetence of Luftwaffe high command, and Hermann Göring in particular. Along with several others, Steinhoff was relieved of his command for challenging Göring's leadership.

After a brief period spent in internal exile, Steinhoff transferred to the Jet Experten unit JV 44 then being put together by his close friend and confidant Adolf Galland in early 1945. Steinhoff initially acted as a de facto recruiting officer, persuading a number of veteran Luftwaffe aces to join the unit - some coming out of the Fighter Pilots' Rest Home at Bad Wiessee to do so. Steinhoff himself scored six confirmed kills with the unit.[Notes 2] Steinhoff survived nearly 1000 combat missions, only to see his flying career come to an end on the ground. On 18 April 1945, Steinhoff's Me-262 suffered a tyre blow-out and crashed on take-off from München-Riem airfield. Steinhoff suffered severe burns (spending two years in hospital) which left him visibly scarred despite years of reconstructive surgery. His eyelids were rebuilt by a British surgeon after the war.

His wartime record was 176 aircraft claimed destroyed, of which 152 were on the Eastern Front, 12 on the Western Front and 12 in the Mediterranean. He also flew 993 operational sorties. During his career as a fighter pilot, Steinhoff was shot down 12 times, but had to bail out only once. Explaining his preference to remain with his damaged aircraft, Steinhoff admitted: "I only bailed out once. I never trusted the parachutes. I always landed my damaged planes, hoping not to get bounced on the way down when I lost power."[3] 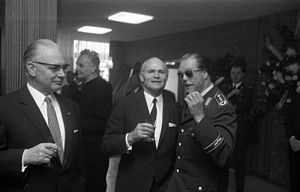 Steinhoff recognised the situation of postwar Germany, and was invited by West Germany's new interim government to rebuild the Luftwaffe within NATO, eventually rising to the rank of full general. Steinhoff served as Chief of Staff and acting Commander Allied Air Forces Central Europe (1965–1966), Chief of Staff of the Luftwaffe (1966–1970) and later as Chairman of the NATO Military Committee (1971–1974).

After retiring from his NATO command in 1974, Steinhoff became a widely read author of books on German military aviation during the war and the experiences of the German people at that time. He wrote The Final Hours, which detailed a late-war plot against Hermann Göring, and also published a vivid account of his time in Italy: Messerschmitts over Sicily: Diary of a Luftwaffe Fighter Commander. Steinhoff also became a watercolorist, and chairman of Germany's Dornier Aviation.[1]

Steinhoff received numerous honours for his work on the structure of the post war Luftwaffe and the integration of the German Federal Armed Forces into NATO, including: The Order of Merit with Star, the American Legion of Merit and the French Légion d'honneur. 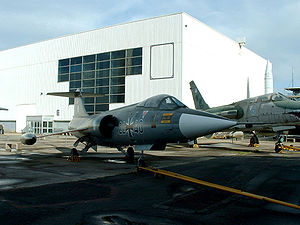 One of Steinhoff's contributions was dealing with the high accident rate the Luftwaffe was having with its F-104 Starfighters. Upon researching the issue, Steinhoff, who had always been a good teacher, deduced that the problem was not the aircraft but poor training for pilots on that particular aircraft. He addressed the problem with an intensive training regime and the accident rate dropped dramatically.

Steinhoff played a major part in the controversial Ronald Reagan US Presidential visit to Kolmeshöhe Cemetery near Bitburg, in 1985. Planned as an act of reconciliation in light of the 40th anniversary of V-E Day that week by Reagan and then West German Chancellor Helmut Kohl, it was discovered that 22 Waffen-SS graves were among the 2,000 military interments. After severe national and political pressure to cancel the visit from Jewish groups and World War II American veterans on Reagan, the visit was preceded by Reagan and Kohl visiting the Bergen-Belsen concentration camp. Along with Kohl, there was 90-year-old General Matthew Ridgway, who had commanded the 82nd Airborne in World War II, and Steinhoff; Reagan placed a wreath at a wall of remembrance in the cemetery. After placing the wreath, they all stood to attention in honour while a short trumpet salute was played. At the end, Steinhoff who was flanking Reagan, suddenly turned and in an unscripted act shook hands firmly with a pleased Ridgway in an act of genuine reconciliation. Reagan smiled, and firmly shook the General's hand too. A very surprised Kohl later thanked Steinhoff for his actions who later said that it just seemed to be the right thing to do.

Shortly before his 80th birthday in 1993, Steinhoff was asked by interviewer Colin D. Heaton what advice he had "for the younger generations today," to which he responded:

Oh, that is a very good question. I would tell them this: Love your country and fight for your country. Believe in truth, and that is enough.[3]

On February 21, 1994, Steinhoff died in a Bonn hospital from complications arising from a heart attack he suffered the previous December. He was 80, and had lived in nearby Bad Godesberg.[1]

In 1990, the former Royal Air Force Gatow in Berlin Gatow, was named General Steinhoff Kaserne on being taken over by the German Federal Armed Forces. And on September 18, 1997, the Jagdgeschwader 73 (fighter wing 73) of the German Air Force was named "Steinhoff" in honor of the general. Steinhoff is one of only a handful of pilots honored in this way, along with Manfred von Richthofen and Max Immelmann.