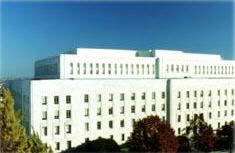 The John Adams Building of the Library of Congress

The John Adams Building is one of three library buildings of the Library of Congress in the United States. The building was originally built simply as an annex to the Library's Main Building (the Thomas Jefferson Building). It opened its doors to the public on January 3, 1939. It is located on Second Street SE between Independence Avenue and East Capitol Street in Washington, DC.

The idea to construct a new library building was presented to the United States Congress in 1928 at the urging of Librarian of Congress Herbert Putnam. The bill was sponsored by U.S. Representative Robert Luce, chairman of the House Committee on the Library. On June 13, 1930, $6.5 million was appropriated for the building's construction, for a tunnel connecting it to the Main Building, and for changes in the east front of the Main Building, including the construction of a Rare Book Room. An additional appropriation approved on June 6, 1935, brought the total authorization to $8,226,457.

Architect of the Capitol David Lynn took charge of the project and commissioned the Washington, D.C. architectural firm of Pierson & Wilson to design the building, with Alexander Buel Trowbridge as consulting architect. The contract stipulated completion by June 24, 1938, but the building was not ready for occupancy until December 2, 1938. The move of the Card Division started on December 12, and it opened its doors to the public in the new building on January 3, 1939.

The building is five stories in height above ground, with the fifth story set back 35 feet (11 m). It contains 180 miles (290 km) of shelving (compared to 104 miles (167 km) in the Jefferson Building) and can hold ten million volumes. There are 12 tiers of stacks, extending from the cellar to the fourth floor. Each tier provides about 13 acres (53,000 m2) of shelf space.

The building is faced in white Georgia marble and incorporated the use of new materials at the time such as acoustical block, formica, vitrolit, and glass tubing.

Commemorating the history of the written word, artist Lee Lawrie sculpted figures into the bronze doors at the west (Second Street) and east (Third Street) entrances.[1]

The figures -- all deities or culture heroes associated with writing -- are: