John Bannister Goodenough (born of U. S. parents in Jena, Germany, 25 July 1922) is an American professor and prominent solid-state physicist. He is currently a professor of mechanical engineering and materials science at the University of Texas at Austin. He is widely credited for the identification and development of the Li-ion rechargeable battery as well as for developing the Goodenough-Kanamori rules for determining the sign of the magnetic superexchange in materials. In 2014 he received the Charles Stark Draper Prize for his contributions to the lithium-ion battery.[1]

During his early career, he was a research scientist at MIT's Lincoln Laboratory. During this time he was part of an interdisciplinary team responsible for developing random access magnetic memory. His research efforts on RAM led him to develop the concepts of cooperative orbital ordering, also known as a cooperative Jahn-Teller distortion, in oxide materials, and subsequently led to his developing the rules for the sign of the magnetic superexchange in materials, now known as the Goodenough-Kanamori rules. 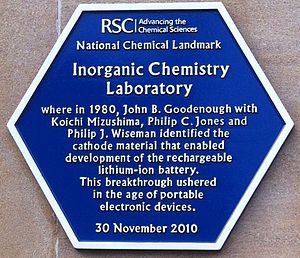 During the late 1970s and early 1980s, he continued his career as head of the Inorganic Chemistry Laboratory at Oxford University, where he identified and developed LixCoO2 as the cathode material of choice for the Li-ion rechargeable battery that is now ubiquitous in today's portable electronic devices. Although Sony is responsible for the commercialization of the technology, he is widely credited for its original identification and development. He received the Japan Prize in 2001 for his discoveries of the materials critical to the development of lightweight rechargeable batteries.

Professorship at University of Texas at Austin

Since 1986, he has been a Professor at the University of Texas at Austin in the departments of Mechanical Engineering and Electrical Engineering.[4] During his tenure there, he has continued his research on ionic conducting solids and electrochemical devices. His group has identified LixFePO4 as a less costly cathode material that is safe for power applications such as machine tools and Hybrid electric vehicles. His group has also identified various promising electrode and electrolyte materials for solid oxide fuel cells. He currently holds the Virginia H. Cockrell Centennial Chair in Engineering.

Goodenough still works at the university at age 100, hoping to find another breakthrough in battery technology.[5]

Fundamental Investigations throughout his career

On the fundamental side, his research has focused on magnetism (e.g. the Goodenough-Kanamori rules) and on the transition from magnetic-insulator to metallic behavior in transition-metal oxides. On the basis of the Virial Theorem, he recognized that this transition should be first-order and should, where the phase transition occurs at too low a temperature for atomic diffusion, result in lattice instabilities. At this crossover, these instabilities lead to charge-density waves in single-valent oxides and to phase-fluctuations in mixed-valent oxides. The phase fluctuations are responsible for such unusual physical properties as high-temperature superconductivity in copper oxides and a colossal magnetoresistance in manganese and cobalt oxides.

Professor Goodenough is a member of the National Academy of Engineering, the National Academy of Sciences, French Academy of Sciences, and the Real Academia de Ciencias Exactas, Físicas y Naturales of Spain. He has authored more than 550 articles, 85 book chapters and reviews, and five books, including two seminal works, Magnetism and the Chemical Bond (1963) and Les oxydes des metaux de transition (1973). Goodenough is a co-recipient of the 2009 Enrico Fermi Award. This presidential award is one of the oldest and most prestigious given by the U.S. government and carries an honorarium of $375,000. He shares the honor with Dr. Siegfried S. Hecker, professor at the Management Science and Engineering Department of Stanford University. In 2010 he was elected a Foreign Member of the Royal Society.[6] On February 1, 2013, Goodenough was presented with the National Medal of Science.[7]

The Royal Society of Chemistry grants a John B Goodenough Award in his honour.[8]