John Emerich Edward Dalberg-Acton, 1st Baron Acton, KCVO, DL (10 January 1834 – 19 June 1902)—known as Sir John Dalberg-Acton, 8th Baronet from 1837 to 1869 and usually referred to simply as Lord Acton—was an English Catholic historian, politician, and writer. He was the only son of Sir Ferdinand Dalberg-Acton, 7th Baronet[1] and a grandson of the Neapolitan admiral Sir John Acton, 6th Baronet.[2][3] He is perhaps best known for the remark, "Power tends to corrupt, and absolute power corrupts absolutely. Great men are almost always bad men."[4] This idea has been tested in laboratory settings.[5]

Acton's grandfather, who in 1791 succeeded to the baronetcy and family estates in Shropshire, previously held by the English branch of the Acton family, represented a younger branch which had transferred itself first to France and then to Italy. However, by the extinction of the elder branch, the admiral became head of the family. His eldest son, Richard, married Marie Louise Pelline, the only daughter and heiress of Emmerich Joseph, 1st Duc de Dalberg, a naturalised French noble of ancient German lineage who had entered the French service under Napoleon and represented Louis XVIII at the Congress of Vienna in 1814. After Sir Richard Acton's death in 1837, she became the wife of the 2nd Earl Granville (1840).[1] Marie Louise Pelline de Dalberg was heiress of Herrnsheim in Germany. She became the mother of John Dalberg-Acton who was born in Naples.[2][3]

From an old Roman Catholic family, young Acton was educated at Oscott College under Dr (afterwards Cardinal) Wiseman until 1848 and then at Edinburgh where he studied privately. At Munich, Acton resided in the house of Johann Joseph Ignaz von Döllinger, theologian and forerunner of the Old Catholic Church, with whom he became lifelong friends. His attempt to be admitted to study at the University of Cambridge failed because he was a Catholic.[3] Nonetheless, Döllinger had inspired in him a deep love of historical research and a profound conception of its functions as a critical instrument, particularly in the history of liberty.[6] He was a master of the principal foreign languages and began at an early age to collect a magnificent historical library, with the object—which, however, he never realised—of writing a great "History of Liberty." In politics, he was always an ardent Liberal.[3] 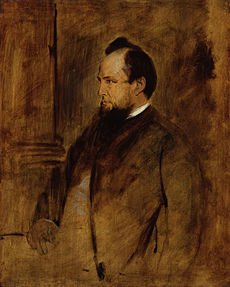 Portrait of John Acton by Franz Seraph von Lenbach, circa 1879.

Through extensive travels, Acton spent much time in the chief intellectual centres reading the actual correspondence of historical personalities.[6] Among his friends were Montalembert, Tocqueville, Fustel de Coulanges, Bluntschli, von Sybel and Ranke. In 1855, he was appointed Deputy Lieutenant of Shropshire.[1] A year later, he was attached to Lord Granville's mission to Moscow as British representative at the coronation of Alexander II of Russia.[7]

In 1859, Acton settled in England, at his country house, Aldenham, in Shropshire. He returned to the House of Commons that same year as member for the Irish Borough of Carlow and became a devoted admirer and adherent of Prime Minister William Ewart Gladstone. However, Acton was not an active MP, and his parliamentary career came to an end after the general election of 1865, when headed the Liberal ballot for Bridgnorth near his Shropshire home. Acton defeated Conservative leader Henry Whitmore, who successfully petitioned for a scrutiny of the ballots, and thus retained his own seat and Acton lost his new seat. After the Reform Act 1867, Acton again contested Bridgnorth, this time reduced to a single seat, in 1868 but to no avail.[7]

Acton took a great interest in the United States, considering its federal structure the perfect guarantor of individual liberties. During the American Civil War, his sympathies lay entirely with the Confederacy, for their defence of States' Rights against a centralised government that he believed would, by what he thought to be all historical precedent, inevitably turn tyrannical. His notes to Gladstone on the subject helped sway many in the British government to sympathise with the South. After the South's surrender, he wrote to Robert E. Lee that "I mourn for the stake which was lost at Richmond more deeply than I rejoice over that which was saved at Waterloo," adding that he "deemed that you were fighting battles for our liberty, our progress, and our civilization."[8]

In 1869 Queen Victoria raised Acton to the peerage, becoming the first Baron Acton. His elevation came primarily through the intercession of Gladstone.[9] The two were intimate friends and frequent correspondents. Matthew Arnold said that that "Gladstone influences all round him but Acton; it is Acton who influences Gladstone."[7] 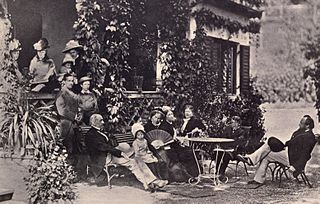 Meanwhile, Acton became the editor of the Roman Catholic monthly paper, The Rambler, in 1859, upon John Henry (later Cardinal) Newman's retirement from the editorship.[10] In 1862, he merged this periodical into the Home and Foreign Review. His contributions at once gave evidence of his remarkable wealth of historical knowledge. Though a sincere Roman Catholic, his whole spirit as a historian was hostile to ultramontane pretensions, and his independence of thought and liberalism of view speedily brought him into conflict with the Roman Catholic hierarchy. As early as August 1862, Cardinal Wiseman publicly censured the Review; and when in 1864, after Döllinger's appeal at the Munich Congress for a less hostile attitude towards historical criticism, the pope issued a declaration that the opinions of Catholic writers were subject to the authority of the Roman congregations, Acton felt that there was only one way of reconciling his literary conscience with his ecclesiastical loyalty, and he stopped the publication of his monthly periodical. He continued, however, to contribute articles to the North British Review, which, previously a Scottish Free Church organ, had been acquired by friends in sympathy with him, and which for some years (until 1872, when it ceased publication) actively promoted the interests of a high-class Liberalism in both temporal and ecclesiastical matters; he also did a good deal of lecturing on historical subjects.[7]

In the March 1862 Rambler, Acton wrote "The Celts are not among the progressive, initiative races, but among those which supply the materials rather than the impulse of history, and are either stationary or retrogressive. The Persians, the Greeks, the Romans, and the Teutons are the only makers of history, the only authors of advancement. Other races possessing a highly developed language, a speculative religion, enjoying luxury and art, attain to a certain pitch of cultivation which they are unable to either communicate or to increase. They are a negative element in the world." And: "Subjection to a people of a higher capacity for government is of itself no misfortune; and it is to most countries the condition of their political advancement."[11]

In 1870, along with his mentor Döllinger, Acton opposed the moves to promulgate the doctrine of papal infallibility in the First Vatican Council, travelling to Rome to lobby against it, ultimately unsuccessfully.[12] Unlike Döllinger Acton did not become an Old Catholic, and continued attending Mass regularly; he received the last rites on his deathbed.[13] The Catholic Church did not try to force his hand. It was in this context that, in a letter he wrote to scholar and ecclesiastic Mandell Creighton, dated April 1887, Acton made his most famous pronouncement:

But if we might discuss this point until we found that we nearly agreed, and if we do agree thoroughly about the impropriety of Carlylese denunciations and Pharisaism in history, I cannot accept your canon that we are to judge Pope and King unlike other men, with a favourable presumption that they did no wrong. If there is any presumption it is the other way, against the holders of power, increasing as the power increases. Historic responsibility has to make up for the want of legal responsibility. Power tends to corrupt, and absolute power corrupts absolutely. Great men are almost always bad men, even when they exercise influence and not authority, still more when you superadd the tendency or the certainty of corruption by authority. There is no worse heresy than that the office sanctifies the holder of it. That is the point at which the negation of Catholicism and the negation of Liberalism meet and keep high festival, and the end learns to justify the means. You would hang a man of no position like Ravaillac; but if what one hears is true, then Elizabeth asked the gaoler to murder Mary, and William III. ordered his Scots minister to extirpate a clan. Here are the greatest names coupled with the greatest crimes; you would spare those criminals, for some mysterious reason. I would hang them higher than Haman, for reasons of quite obvious justice, still more, still higher for the sake of historical science.[4]

Thenceforth he steered clear of theological polemics. He devoted himself to reading, study and congenial society. With all his capacity for study, he was a man of the world and a man of affairs, not a bookworm.[7] His only notable publications were a masterly essay in the Quarterly Review of January 1878 on "Democracy in Europe;" two lectures delivered at Bridgnorth in 1877 on "The History of Freedom in Antiquity" and "The History of Freedom in Christianity"—these last the only tangible portions put together by him of his long-projected "History of Liberty;" and an essay on modern German historians in the first number of the English Historical Review, which he helped to found (1886). After 1879 he divided his time between London, Cannes, and Tegernsee in Bavaria, enjoying and reciprocating the society of his friends. In 1872 he had been given the honorary degree of Doctor of Philosophy by the University of Munich; in 1888 Cambridge gave him the honorary degree of Doctor of Laws, and in 1889 Oxford the Doctor of Civil Law; and in 1890 he received the high academic accolade of being made a fellow of All Souls College, Oxford.[7]

In 1874, when Gladstone published his pamphlet on The Vatican Decrees in their Bearing on Civil Allegiance, Lord Acton wrote during November and December a series of remarkable letters to The Times, illustrating Gladstone's main theme by numerous historical examples of papal inconsistency, in a way which must have been bitter enough to the ultramontane party, but ultimately disagreeing with Gladstone's conclusion and insisting that the Church itself was better than its premises implied. Acton's letters led to another storm in the English Roman Catholic world, but once more it was considered prudent by the Holy See to leave him alone. In spite of his reservations, he regarded "communion with Rome as dearer than life".[7]

Acton's reputation for learning gradually spread abroad, largely through Gladstone's influence. Gladstone found him a valuable political adviser, and in 1892, when the Liberal government came in, Lord Acton was made a lord-in-waiting. Finally, in 1895, on the death of Sir John Seeley, Lord Rosebery appointed him to the Regius Professorship of Modern History at Cambridge.[6] He delivered two courses of lectures on the French Revolution and on Modern History, but it was in private that the effects of his teaching were felt most. The Cambridge Modern History, though he did not live to see it, was planned under his editorship.[7]

Lord Acton became ill in 1901 and died on 19 June 1902 in Tegernsee. He was succeeded in the title by his son, Richard Lyon-Dalberg-Acton, 2nd Baron Acton. His 60,000-volume library, formed for use and not for display and composed largely of books full of his own annotations, was bought immediately after his death by Andrew Carnegie and presented to John Morley, who forthwith gave it to the University of Cambridge.[7]

According to Hugh Chisholm, editor of the 1911 Encyclopaedia Britannica:

Lord Acton has left too little completed original work to rank among the great historians; his very learning seems to have stood in his way; he knew too much and his literary conscience was too acute for him to write easily, and his copiousness of information overloads his literary style. But he was one of the most deeply learned men of his time, and he will certainly be remembered for his influence on others.[7]