From Infogalactic: the planetary knowledge core
Jump to: navigation, search
For the explorer and settler of South Australia, see John Finnis (captain). 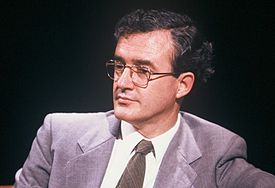 Appearing on television discussion programme After Dark in 1987

John Mitchell Finnis (born 28 July 1940) is an Australian legal scholar and philosopher specialising in the philosophy of law. He is professor of law at University College, Oxford and at the University of Notre Dame, teaching jurisprudence, political theory, and constitutional law. He is admitted to the English Bar as a member of Gray's Inn.

Finnis was educated at St. Peter's College, Adelaide and the University of Adelaide, where he was a member of St. Mark's College. He obtained his LL.B. there, winning a Rhodes scholarship to University College, Oxford, in 1962, where he obtained his D.Phil. for a thesis on the concept of judicial power, with reference to Australian federal constitutional law.[1]

Finnis was a friend of Aung San Suu Kyi, also an Oxford graduate; and, in 1989, Finnis nominated her for the Nobel Peace Prize. Aung San Suu Kyi won the prize but did not receive it until June 2012, when she recalled how her late husband, Michael Aris, had visited her under house arrest and brought her the news "that a friend, John Finnis" had nominated her for the prize.[2]

Finnis is a legal philosopher and author of Natural Law and Natural Rights (1980, 2011), a seminal contribution to the philosophy of law and a restatement of natural law doctrine. For Finnis there are seven basic goods; life, knowledge, play, aesthetic experience, sociability of friendship, practical reasonableness and religion. Life for Finnis involves all aspects of vitality that enable a person to gain strong willpower. The second aspect of well-being is knowledge and is described as the pure desire to know, simply out of curiosity, as well as a concerning interest and desire for truth. The third aspect, play, is regarded as self-evident as there is no real point of performing such activities, only for pure enjoyment. Aesthetic experience is the fourth aspect and is considered similarly to play however; it does not essentially need an action to occur. The fifth aspect for Finnis is sociability where it is realised through the creation of friendships, that these relationships are fundamental goods. Practical reasonableness is the sixth basic good where it is one’s ability to use their intellect in deciding choices that ultimately shape one’s nature. The final basic good is religion; it encompasses the acknowledgment of a concern for a simplified distinct form of order, where an individual’s sense of responsibility is addressed; it is "all those beliefs that can be called matters of ultimate concern; questions about the point of human existence".

As the basic goods, and practical reasoning principles, are features of one’s well being the question is asked as to what are the basic aspects of well being. The basic goods are ideals to be achieved and perused whereby this view enables one to see the good and bad actions available. This knowledge effects a person’s practical reasoning regarding the different accessible forms of good that they can decide. The real question for Finnis is, ‘Whether something is a good in and of itself.’ Legal theorist Russel Hittinger provides that the goods are then broken down into being either substantive or reflexive. Life, play and knowledge are substantive goods where sociability, aesthetic experience, practical reasonableness and religion are reflexive. He continues by stating that reflexive goods are defined in conditions of human choice where substantive goods provide reasons for making choices. Although Finnis provides that the basic goods are not to be considered moral values. Finnis concludes that the basic goods should be considered fundamentally good, where these ideals are good for their individual purpose and not an instrumental purpose.

After discussing the basic goods it is argued that within the list there is no hierarchal order, as the basic goods are considered impossible to compare or measure. Finnis believes the goods are equally self-evident. Each of the basic goods can be considered the most important, as none of them can be reduced to simply a mechanism of achieving another. While technically the goods can be treated as superior to one another Finnis provides that each good is still fundamental where no priority value exists. Finnis asserts that, ‘These choices constitute a life plan that subjectively orders the basic goods for the individual but the fundamental nature and intrinsic value of the goods themselves is not changed by this. (needs citation)

Finnis's work on natural law ethics has been a source of controversy in both neo-Thomist and analytical circles. Craig Paterson sees his work as interesting because it challenges a key assumption of both neo-Thomist and analytical philosophy: the idea that a natural law ethics must be based upon an attempt to derive normative (or "ought") statements from descriptive (or "is") statements.[4]

For Andrew Sullivan, Finnis has articulated "an intelligible and subtle account of homosexuality" based on the new natural law, a less biologically-based version of natural law theory. In his view, Finnis argues that the state should deter public approval of homosexual behaviour while refusing to persecute individuals on the basis of their sexual orientation, basing this position not on the claim that homosexual sex is unnatural but on the idea that it cannot involve the union of procreation and emotional commitment that heterosexual sex can, and is therefore an assault on heterosexual union. Sullivan believes that such a conservative position is vulnerable to criticism on its own terms, since the stability of existing families is better served by the acceptance of those homosexuals who are part of them.[5] Other scholars, such as Stephen Macedo and Michael J. Perry, have also criticised Finnis's views.[6]