Major General John Dutton (Johnny) Frost CB, DSO & Bar, MC, DL (31 December 1912 – 21 May 1993) was an airborne officer of the British Army best known for being the leader of the small group of airborne forces that actually arrived at Arnhem bridge during the Battle of Arnhem in Operation Market Garden, in World War II. He was one of the first to join the newly formed Parachute Regiment and served with distinction in many wartime airborne operations until he was injured and captured at Arnhem. His army career continued until his retirement in 1968.

Frost was the son of Frank Dutton Frost CBE MC, a British Army officer, and his wife, Elsie Dora (née Bright). He was educated at Monkton Combe School in Somerset, John Frost joined the British Army on 1 September 1932, when on graduation from the Royal Military College, Sandhurst, he was commissioned as a second lieutenant in the Cameronians (Scottish Rifles).[1] From 1938 to 1941 Frost worked with the Iraq Levies as a captain. He joined the Parachute Regiment in 1941.

Service in the Second World War

Frost distinguished himself in Operation Biting, a raid to dismantle and steal the radar dish or components of the German Würzburg radar at Bruneval. The raid was the second time the fledgling British parachute regiment was called on. C Company under the then Major Frost was given the task and on 27 February 1942 120 men landed, meeting stiff opposition but succeeded in stealing the component as well as capturing a German expert on the radar. The operation lost three men killed and seven badly wounded. Prime Minister Winston Churchill applauded the raid and guaranteed further wartime operations for the paratroopers.[2] Frost was awarded the Military Cross.[3]

During the Allied landings in North Africa British airborne units landed in Tunisia. At this time Lieutenant Colonel Frost, who was now in command of the 2nd Battalion, was tasked to attack enemy airfields near Depienne 30 miles south of Tunis. The airfields were found to be abandoned and the armour column they were supposed to meet up with at Oudna never arrived, leaving Frost's battalion 50 miles behind enemy lines. Heavily outnumbered and continuously attacked on their route out, they managed to fight their way back to Allied lines but lost 16 officers and 250 men. The battalion carried on fighting with the British First Army through to Tunis.

In 1943 Frost's battalion with the rest of the 1st Parachute Brigade was landed in Sicily during Operation Husky with orders to capture a road bridge called Ponte di Primosole. The brigade was hopelessly scattered and the 295 officers and men who reached the bridge found themselves facing the German 4th Parachute Regiment and lost the bridge until the arrival of other Eighth Army units.

Frost's last action in this theatre was in Italy when the entire 1st Airborne Division landed at Taranto by sea.

On 17 September 1944, as commander of the 2nd Parachute Battalion, Frost led a mixed group of about 745 lightly armed men who landed near Oosterbeek and marched into Arnhem.[5] The battalion reached the bridge capturing the northern end, but Frost then found that his force was surrounded by the II.SS-Panzerkorps and cut off from the rest of 1st Airborne. Frost was in command during the fierce four-day battle that followed, in which the Germans rained artillery fire onto the parachutists' positions, and sent tanks and infantry into some of the most intense fighting seen by either side, with very little mercy given. The Germans were greatly surprised by the airborne forces' refusal to surrender and their continuous counterattacks. After a short truce on the third day, when 250 wounded were removed, the battle continued until the remaining paratroopers had run out of ammunition. There were around one hundred paratroopers left.

As a result of this action, during which he was wounded by shrapnel in his feet, Frost became a legendary figure in the Parachute Regiment and the British Army.

In action, Frost was a tough leader whose clear head in battle won the respect of every Paratrooper in the battalion. "He didn't mix his words and seemed to inject confidence in everyone, even if you didn't like what he said. We would have followed him anywhere" said one Para.[2]

Following his capture, Frost was held as a prisoner of war at Spangenberg and later a hospital in Obermassfeldt. He was freed when the area was overrun by United States troops in March 1945. He was awarded a Bar to his DSO on 20 September 1945 for his leadership at Arnhem.[6]

Frost remained in the army after the war. He was promoted to temporary Major General on 11 October 1961 and appointed General Officer Commanding of the 52nd (Lowland) Infantry Division.[7]

By the time of his retirement from the army in 1968, Frost had attained the rank of Major General and in addition to his wartime decorations, had been appointed a Companion of the Order of the Bath in the 1964 New Year Honours,[8] and was made a Grand Officer of the Sovereign Military Order of Malta.

In 1982, Frost was appointed a Deputy Lieutenant in the County of West Sussex.[9]

He was the subject of an episode of the television programme This Is Your Life on 6 April 1977. 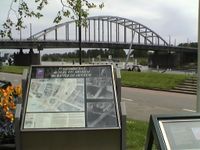 The John Frost Bridge, as seen from the memorial.

In 1978 the bridge over the Rhine at Arnhem was renamed the John Frost Bridge in his honour, reportedly after much reluctance to accept the honour from Frost. His role in the battle was told in Cornelius Ryan's best-seller A Bridge Too Far. Frost himself wrote an autobiography A Drop Too Many based on his wartime experiences which was published in 1980. His second autobiography Nearly There was published in 1991. Frost acted as a military consultant to Richard Attenborough's film adaptation of Ryan's book. In the movie Frost was portrayed by Anthony Hopkins.

His role in Operation Biting was also retold in the film The Red Beret starring Alan Ladd and released in 1953. His character was renamed Major John Snow and featured as the second lead character. He was played by Leo Genn. Operation Biting also appears to be an inspiration for the film Age of Heroes released in 2011. On this occasion the character Major Jack Jones, played by Sean Bean, was loosely based on Frost - although the film synopsis claims Ian Fleming's 30 Assault Unit as the primary inspiration.