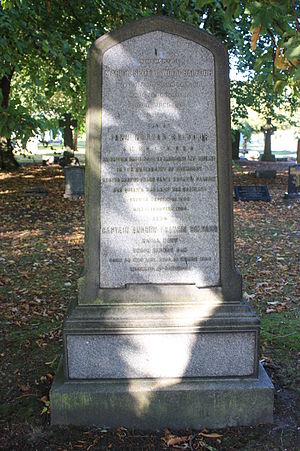 John Hutton Balfour FRSE FRS FRCSE FLS MWS (15 September 1808 – 11 February 1884) was a Scottish botanist.[1] Balfour became a Professor of Botany, first at the University of Glasgow in 1841, moving to Edinburgh University and also becoming Regius Keeper of the Royal Botanic Garden Edinburgh and Her Majesty's Botanist in 1845. He held these posts until his retirement in 1879.

He was the son of Andrew Balfour, an Army Surgeon who had returned to Edinburgh to set up a printing and publishing business.

Balfour was educated at the Royal High School in Edinburgh and then studied at St Andrews University and Edinburgh University, graduating with degrees of M.A. and then M.D., the latter in 1832. In Edinburgh, he became a notable member of the Plinian Society, where he encountered William A.F. Browne and entered the vigorous debates concerning natural history. His original intention had been to seek ordination in the Church of Scotland but instead he started medical practice in Edinburgh in 1834 after studying abroad.

With an interest in botany, Balfour was prominent in the foundation of both the Botanical Society of Edinburgh in 1836 and the Edinburgh Botanical Club in 1838.

In 1841 he began giving lectures in Edinburgh's extramural school on botany with some success. In 1842 he was appointed Professor of Botany at Glasgow University. In 1845, Balfour transferred to take the chair of Botany at Edinburgh University, a position he held until 1879. He was also nominated keeper of the Royal Botanic Garden in Edinburgh. These appointments followed a protracted political struggle in which Balfour triumphed over his distinguished opponent, Joseph Dalton Hooker, a close associate of Charles Darwin.

Balfour served for many years as dean of the faculty of medicine in Edinburgh University and he was an enormously successful teacher of botany, lacing his scientific lectures with theological asides, as he remained profoundly wedded to natural theology. In January 1862, he corresponded with Charles Darwin on botanical matters, recollecting their evenings together at the Plinian Society with his brother-in-law William A.F. Browne. He also corresponded with the extraordinary and irascible botanist Hewett Cottrell Watson, an early phrenologist, evolutionist and advocate of the differential development of the human cerebral hemispheres.

Under Balfour's care the Royal Botanic Garden was enlarged and improved and a palm-house, arboretum, and teaching accommodation were built. His publications include botanical text-books such as Manual of Botany (1848), Class Book of Botany (1852), Outlines of Botany (1854), Elements of Botany for Schools (1869), Botanist's Companion (1860), Introduction to Palaeontological Botany (1872), and The Plants of Scripture. He also contributed to the article on botany in the 8th edition of Encyclopaedia Britannica. Balfour retired from his academic post in 1879. His son, Sir Isaac Bayley Balfour (1853–1922), became a distinguished botanist in his own right, serving as Sherardian Professor of Botany at Oxford University from 1884 to 1888, before returning to his father's old Chair at Edinburgh.

California's foxtail pine is named Pinus balfouriana Balf. after him.

From 1877 he lived in Inverleith House within the then newly extended Royal Botanic Gardens, Edinburgh in his role there as Regius Keeper.

He died in Inverleith House and was buried in Warriston Cemetery with his wife Marion Spottiswood Balfour.[3] The grave lies on the north side of the main upper east-west path, towards its western end.

His great-great-granddaughter is actress Tilda Swinton.

The standard author abbreviation Balf. is used to indicate this individual as the author when citing a botanical name.[4]