John Patrick Kenneally (né Leslie Jackson) VC (15 March 1921 – 27 September 2000) was an English recipient of the Victoria Cross, the highest and most prestigious award for gallantry in the face of the enemy that can be awarded to British and Commonwealth forces.

John Patrick Kenneally was born as Leslie Jackson at 104 Alexandra Road, Balsall Heath, Birmingham. His mother was Gertrude Nowell Robinson, the 18-year-old daughter of a Blackpool pharmacist who had been sent to live with relatives in order to conceal her son's illegitimate birth. She changed her surname to Jackson, and had her son christened Leslie. His father was a wealthy Mancunian Jewish textile manufacturer, Neville Blond, who would later become chairman of the English Stage Company and marry Elaine Marks, the Marks & Spencer heiress.[1]

Jackson joined the Honourable Artillery Company on his 18th birthday. He was assigned to an anti-aircraft battery and overstayed a period of leave. He was sentenced to a period of detention at Wellington Barracks, run by the Irish Guards. He was impressed by their high standards and applied for a transfer but was rejected. Jackson deserted and joined a group of itinerant Irish labourers, eventually making his way to Glasgow. When one of them returned to Ireland he obtained his identity card and used it to enlist in the Irish Guards.[2] 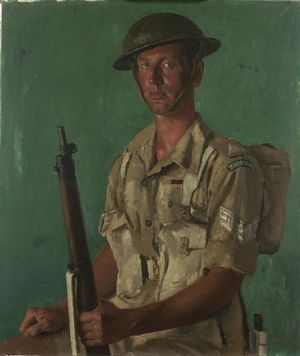 He was a 22-year-old lance-corporal in the Irish Guards when the following deed took place for which he was awarded the VC.

On 28 April 1943 at Djebel Bou Azoukaz, Tunisia, Lance-Corporal Kenneally charged alone down the bare forward slope straight into the main body of the enemy about to make an attack, firing his Bren gun from the hip; the enemy were so surprised that they broke up in disorder. The lance-corporal repeated his exploit on 30 April when, accompanied by a sergeant, he charged the enemy forming up for assault, inflicting many casualties. Even when wounded he refused to give up, but hopped from one fire position to another, carrying his gun in one hand and supporting himself on a comrade with the other.[3]

He was remembered in Winston Churchill's famous broadcast speech on 13 May 1945 "Five years of War",[4] as having defended Ireland's honour:

"When I think of these days I think also of other episodes and personalities. I do not forget Lieutenant-Commander Esmonde V.C., D.S.O., Lance-Corporal Kenneally, V.C., Captain Fegen V.C., and other Irish heroes that I could easily recite, and all bitterness by Britain for the Irish race dies in my heart. I can only pray that in years which I shall not see, the shame will be forgotten and the glories will endure, and that the peoples of the British Isles and of the British Commonwealth of Nations will walk together in mutual comprehension and forgiveness."

Kenneally finished his military career in the newly formed 1st Guards Parachute Battalion and later bought himself out of the army in July 1948 to be with his wife and children.

Kenneally went in to the motor trade after the army and remained in it for the rest of his working life. He briefly appeared in the news again in 2000 when he published his autobiography and wrote to the Daily Telegraph rebuking Peter Mandelson for calling the Irish Guards “chinless wonders”.[1]